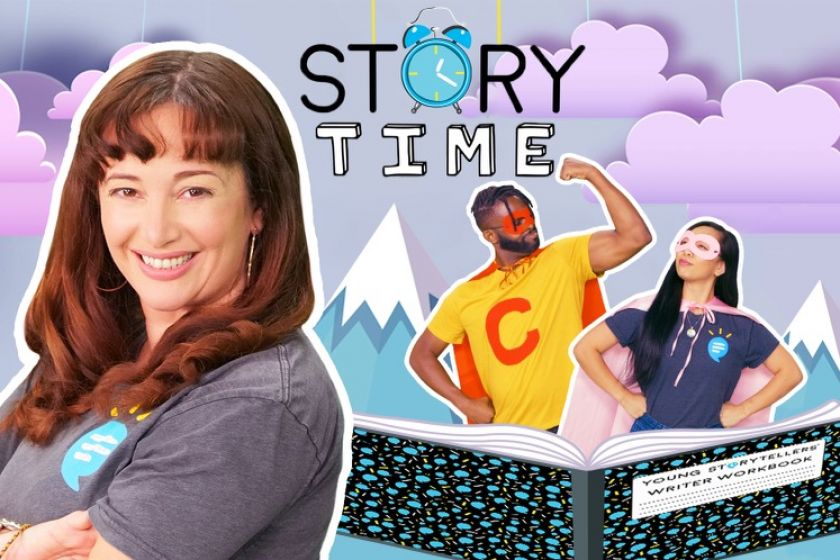 Young Storytellers, a Los Angeles-based non-profit focused on sparking youth creativity, has debuted Story Time, a 12-episode web series aimed at helping children write their own stories. Based on the organization’s 20+ years in the classroom and collaboration with AT&T, Story Time draws on tried and true activities that help young people explore their imagination, gain confidence and have fun along the way. Today’s launch kicks off the series, with new episodes set to release over the next 12 Saturdays on the Young Storytellers YouTube page and the Story Time hub on their website.
“Millions of students are learning from home,” said Pilar Alvarez, Education Director of Young Storytellers. “We wanted to provide another avenue for them to stay engaged outside of the classroom and give them an opportunity to tell their stories in an exciting way.”
Each episode will feature special guests including writers, producers, and performers such as Natasha Rothwell (Insecure), Franklin Leonard (The Black List), Ligiah Villalobos (Go Diego Go!), Mauricio Mota (East Los High), and many more!
At the end of the web series, children will have the opportunity to submit their stories for a chance to see them brought to life in partnership with our entertainment industry partners. Students may have their submitted characters designed by an animator, meet a professional storyteller, or even see their story brought to life on Zoom by some of their favorite stars.
Story Time is based on Young Storytellers’ flagship program, Script to Stage. Script to Stage begins by pairing youth with mentors that guide them through the writing process, and ends with their stories being performed live on stage – and now Zoom – with the help of professional actors. Since Script to Stage launched in 1997, nearly 15,000 stories have been brought to life through the program.
“We know the Script to Stage program works, and Story Time is a way for us to inspire even more young people across the country to tell their stories,” Alvarez says. “We need to raise the voices of young people, especially those that aren’t often heard.”
About Philanthropy & Social Innovation at AT&T
Our society doesn’t work if it doesn’t work equally for all. We recognize that inequalities are pervasive, and we have a role to play in helping to address them. That’s why we’re committed to advancing education, creating opportunities, strengthening communities and improving lives, particularly amongst historically underserved populations. We have a long history of investing in projects that promote academic and economic achievement and addressing community needs that promote social justice and racial equality. With a financial commitment of $600 million through AT&T Aspire since 2008, AT&T has leveraged technology, relationships and social innovation to help give people – regardless of age, gender, race or socioeconomic status – the opportunity to succeed.
Source: Young Storytellers