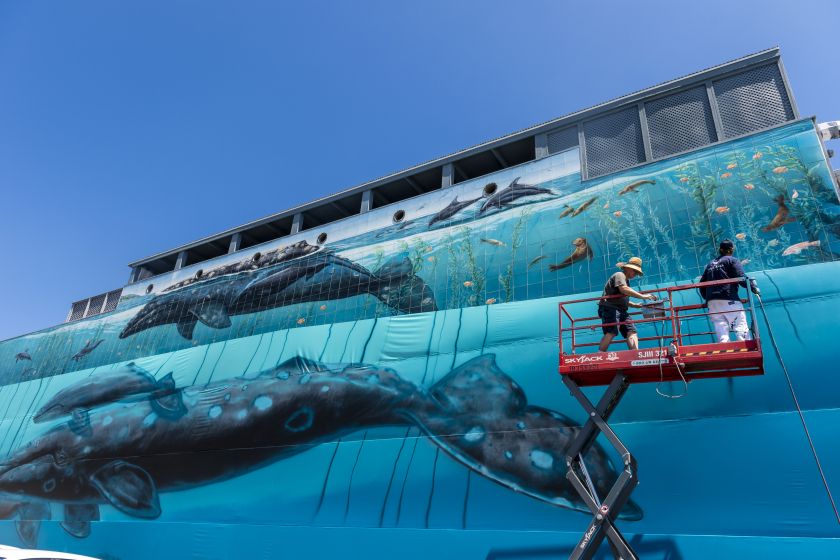 To mark its 10-year anniversary, the National Mayor’s Challenge for Water Conservation is calling on people across the U.S. to take small, daily actions to reduce water waste and promote the sustainability of our nation’s water ecosystems. The challenge, presented by the Wyland Foundation and Toyota, kicks off with a live mural painting at 11 a.m. EDT, April 1, at Tuttle Elementary in Sarasota, Florida. Watch it broadcast on ZOOM.
The mayor’s challenge started 10 years ago in Florida by a handful of mayors who contacted the Wyland Foundation to work together on positive ways to more creatively engage and inspire their residents about water issues. The 10th anniversary kickoff event will include remarks by Sarasota Mayor Hagen Brody, Representatives from Mote Marine Lab, and a live mural painting by internationally renowned marine life artist Wyland for Tuttle Elementary in Sarasota, Florida. Event will be 11 a.m.-noon EDT, April 1. The Wyland National Mayor’s Challenge for Water Conservation is a non-profit community service campaign presented by the Wyland Foundation and Toyota, in association with EPA WaterSense, The Toro Company, National League of Cities, Hobie, and Petal.
The campaign, which brings civic leaders and residents together to become better water conservation stewards, gives residents a chance to win $3,000 toward their home utility bills, home irrigation makeovers from partners Toro, Hobie gift cards, and hundreds more eco-friendly prizes. Residents can also nominate a deserving charity in their city to receive a 2021 new-generation Toyota Highlander Hybrid XLE. Cities with the most residents that make pledges qualify for over $50,000 in prize drawings. Residents make their pledges online at www.mywaterpledge.com.
“In the last 10 years, we’ve seen climate change and shifting weather patterns affect the distribution of water, pollution impacting the quality of water, and fresh water sources that are being used at a quicker rate than they are bring refilled,” said Wyland Foundation President Steve Creech. “That’s why it’s so important to have programs like this where people can learn what they can do to help.”
Last year, mayors from 39 states encouraged residents to make over 300,000 pledges to promote drought resiliency, protect watersheds, and, ultimately, reduce stress on aging water infrastructure. Events planned for the 10th anniversary include a multi-city Florida tour of the Wyland Foundation’s clean water mobile learning center, a 1,000-square-foot science center on wheels devoted to teaching communities about current issues ranging from water pollution, biodiversity, algae blooms, water as a shared resource, and best practices to protect marine habitats. A new digital engagement tool will provide additional opportunity for people who participate in the challenge to turn their pledges into specific localized actions that can have a positive impact.
Source: Wyland Foundation