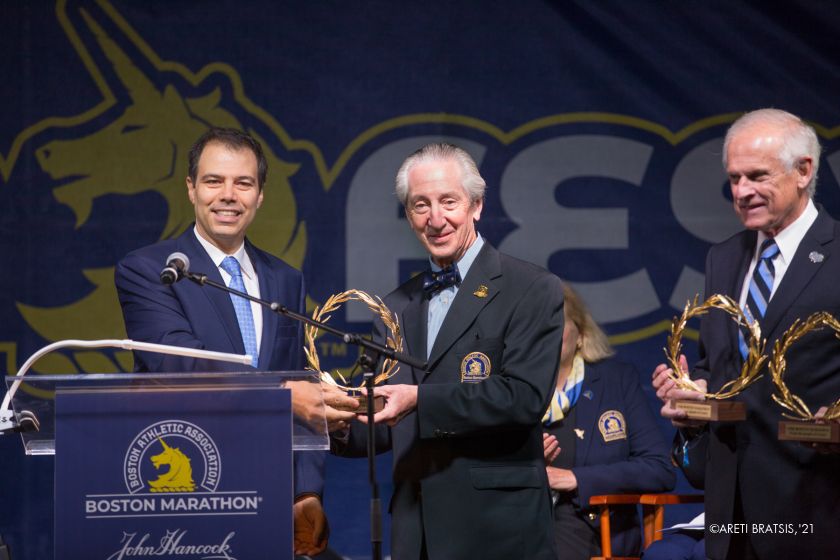 The Consul General of Greece, Stratos Efthymiou, presented four golden olive branch wreaths tonight to the Boston Athletic Association during the Boston Marathon Opening Ceremony. The wreaths will crown the winners of Monday’s 125th Boston Marathon.
“We are very honored to present these four olive wreaths, cut from the plains of Marathon, as a gift from Greece. These golden wreaths connect Boston, the Athens of America, with the Marathon’s Greek roots and the ideals of fair play, democracy, and liberty,” said Efthymiou.
“The Alpha Omega Council (A.O.C.) is proud of its longstanding support and collaboration with the Greek Consulate General in presenting these Wreaths. Our driving purpose is to promote the ideals of Hellenism and to preserve the Boston Marathon Wreath tradition,” said Costa Sideridis, the President of the A.O.C., the Greek American philanthropic non-profit, which worked closely with the Greek Consulate to organize the presentation of the wreaths.
“For many years, the signature Boston Marathon champion’s gold wreaths have been a symbol of athletic excellence and triumph here in Boston,” said Dr. Michael P. O’Leary, Chairman of the Board of the Boston Athletic Association. “We sincerely thank the Consul General of Greece and Alpha Omega Council for continuing this meaningful tradition and preserving the connection to our sport’s roots in Marathon. The crowning of our champions will be a very meaningful moment at the 125th Boston Marathon.”
On the stage during the wreath presentation, together with the Consul General of Greece, were the leaders of the B.A.A., and the Alpha Omega Council, and Tim Kilduff from the 26.2 Foundation.
The wreaths are offered in the name of Stylianos Kyriakides, the winner of the 1946 Boston Marathon, who was the first-ever charitable runner. After his victory, Kyriakides stayed in the U.S., raising funds and medical supplies for his countrymen in Greece, who were suffering from the aftermath of WW II. To honor the legacy of Kyriakides, the B.A.A. is featuring Kyriakides, among other winners, in banners hanging throughout Boston.
Press contacts:
Peter Lemonias
P: (617) 571-6315
E: peter.lemonias@gmail.com
Costa Sideridis
P: (617) 510-9335
E: costas@ferroceramic.com
Consulate General of Greece in Boston
P: (617) 523-0100
E: grgencon.bos@mfa.gr
Source: Consulate General of Greece in Boston