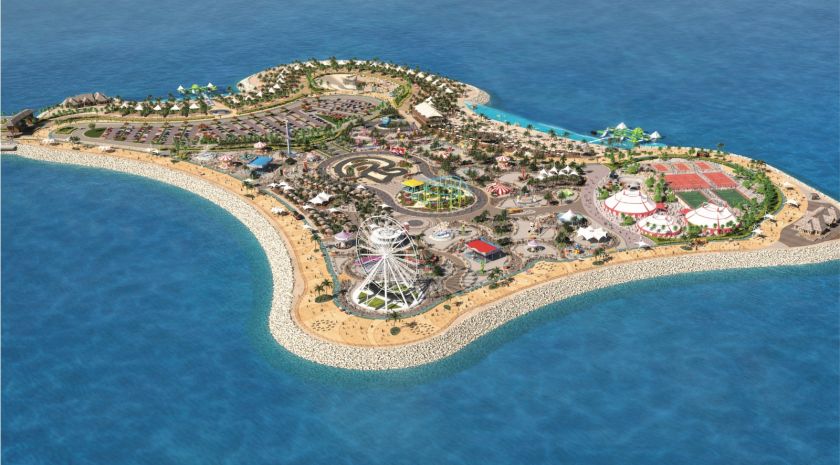 Ground has broken on an exciting new project to bring the world-famous Winter Wonderland to Qatar for five consecutive years, starting November 2022.
Housed on the Al Maha Island near Lusail City just north of Qatar’s capital, Doha Winter Wonderland is a 200,000 square metre venue that will open prior to the FIFA World Cup Qatar 2022™ next November, providing visitors a festive experience during their stay.
Unlike its sister Hyde Park installation in London, which is famous for its variety of festive attractions, activities and entertainment, visitors to Doha Winter Wonderland will find seafront chalets, restaurants, games, and cafes, all under delightful average temperatures in the mid-20°Cs.
Under the patronage and presence of His Excellency Sheikh Khalid bin Khalifa bin Abdulaziz Al Thali, Prime Minister and Minister of Interior, Qatari Diar Company and Qatar Tourism have penned a five-year deal with Elegancia Group to build and operate the project.
Chairman of Qatar Tourism and Qatar Airways Group Chief Executive, His Excellency Mr. Akbar Al Baker, said: “This project, which will be a quality addition to Qatari tourism, is not just a games area, but rather an integrated entertainment destination on par with the foremost entertainment cities in the world.”
Doha Winter Wonderland will include six play areas with more than 50 world-class games for all ages. It will be operated by IMG (International Marketing Group), the same company that manages the event in Hyde Park.
A ground-breaking ceremony on the Al Maha Island was attended by HE Mr. Ali bin Ahmed al-Kuwari, Minister of Finance, HE Sheikh Mohammed bin Hamad bin Qassim al-Thani, Minister of Commerce and Industry, and HE Mr. Jassim bin Saif al-Sulaiti, Minister of Transport. It was also attended by HE Sheikh Khalid bin Khalifa bin Jassim Al Thani, Chairman of the Board of Directors of Qatari Diar, HE Akbar Al Baker, President of Qatar Tourism, HE Eng. Abdullah bin Hamad Al Attiyah, CEO of Qatari Diar, along with many dignitaries.
His Excellency Sheikh Khalid bin Khalifa bin Jassim Al Thani, Chairman of Qatari Diar’s Board of Directors, said: “Once the project is complete, it will not just be a tourist attraction targeting Qatari residents, but one that will go beyond to become a remarkable and distinctive addition to a growing list of world-class tourist destinations in Qatar.”
Eng. Abdullah bin Hamad Al-Attiyah said: “As Lusail City is planned to be a future city that embraces societal diversity, advanced infrastructure, integrated services both public and private, and large local and international institutions and entities, a new world-class entertainment destination such as Doha Winter Wonderland will add a new competitive advantage to the city and will serve as an outlet for residents and visitors.”
Moataz Al Khayat, Chairman of Elegancia Group, said: “We are fortunate to be part of this prestigious project that presents Doha Winter Wonderland as an important milestone in Qatar’s growing and developing tourism sector.”
Further holiday information on Qatar can be found at www.visitqatar.qa.
-Ends-
For media-related inquiries, please contact Qatar Tourism’s Press Office at:
+974 7774 7863 | pressoffice@visitqatar.qa
About Qatar:
Qatar is a peninsula surrounded by the Arabian Gulf in the heart of the Middle East, with 80% of the earth’s population within a six-hour flight. Ranked the safest country in the world in 2020 by Numbeo, Qatar welcomes all travellers, and guests from over 85 countries can enter visa-free. Qatar has an incredible variety of easily accessible tourist attractions, a plethora of fauna and flora including Whale Sharks and the majestic national animal the Arabian Oryx, and most experiences are a unique combination of cultural authenticity and modernity. From iconic museums to high-rise restaurants, from thrilling desert adventures to world-famous events including none other than the FIFA World Cup Qatar 2022™, there is something for all types of travellers and budgets.
About Qatar Tourism:
Qatar Tourism is the official government body responsible for the development and promotion of tourism in Qatar, facilitating the sector’s exponential growth. Qatar is a destination where people of the world come together to experience unique offerings in arts, culture, sports, and adventure, catering to family and business visitors, rooted in Service Excellence. Qatar Tourism seeks to boost the entire tourism value chain, grow local and international visitor demand, attract inward investment, and drive a multiplier effect across the domestic economy. The Qatar Tourism Strategy 2030 sets an ambitious target to attract over six million international visitors a year by 2030, making Qatar the fastest-growing destination in the Middle East.
Web: www.visitqatar.qa
Twitter: @VisitQatar
Instagram: @VisitQatar
Source: Qatar Tourism