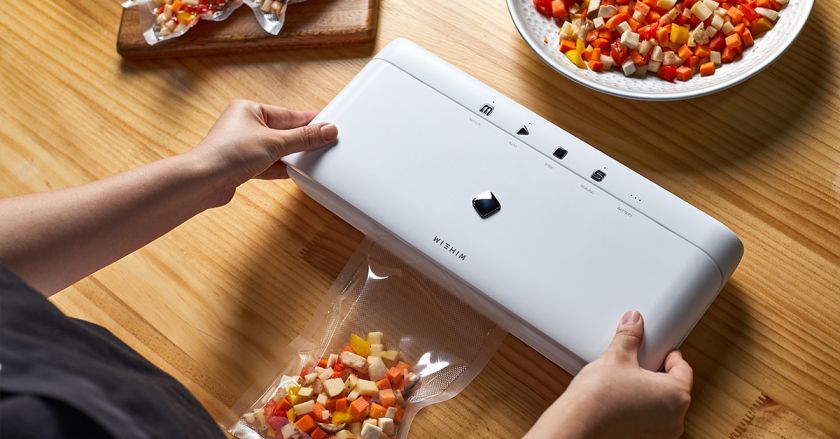 After successfully raising $119,595 with the support of 971 backers on the South Korean crowdfunding platform Wadiz for the first-generation SEALVAC cordless food vacuum sealer, WIHEIM made improvements to the device and is now planning to launch the second-generation SEALVAC on Kickstarter. The SEALVAC campaign will be launching on Monday, June 28, at 9:00 p.m. PST.
With all of its products, WIHEIM aims to reimagine how food is prepared, preserved, stored, and eventually cooked into healthy and delicious meals. In order to achieve this goal, the traditional food vacuum sealer had to be redesigned and engineered from the ground up. With a cordless design, the WIHEIM design team came to the conclusion that the device would provide a lot of convenient and extra kitchen countertop space for its users. However, the team did not want to sacrifice the power of the vacuum mechanism (450mmHg) in the process. This goal was not only achieved but improved upon to make SEALVAC superior in its class thanks to the two Samsung SDI 18760 battery cells, which are known to be used to power EVs.
Another feature that is exclusively available in the SEALVAC and not in any other vacuum sealer is UVC lights that are located inside the device. Once a bag is inserted into the SEALVAC, the portion of the bag that is being sealed is disinfected by three UVC sanitizing lights to ensure that unwanted bacteria that promote the acceleration of food decomposition remain in the bag. The result of this allows SEALVAC users to keep their foods fresh for up to five times longer while maintaining the original flavor of the ingredients. As a bonus feature, the SEALVAC is compatible with other existing vacuum sealing bags and can even be used on bags that contain pre-cooked foods. For a complete list of the SEALVAC features, please visit the SEALVAC Kickstarter campaign.
Backers from the Wadiz campaign reported that they were able to not only preserve their foods for much longer but were also able to save up to three times in fridge space and save around $100-$200 in groceries each month. Through the second-generation SEALVAC, the WIHEIM team hopes to be able to bring those benefits to people all over the world through its Kickstarter campaign.
Upon the launch of the campaign, the SEALVAC will be available at $109 for the first 100 backers. After that, backers will be able to get the SEALVAC with a $119 pledge. Once the campaign concludes, the SEALVAC will go immediately into production and will be shipped to all Kickstarter backers in October 2021. Editors, journalists, and social media influencers interested in reviewing a sample of the SEALVAC are encouraged to reach out through the Kickstarter campaign.
Source: WIHEIM