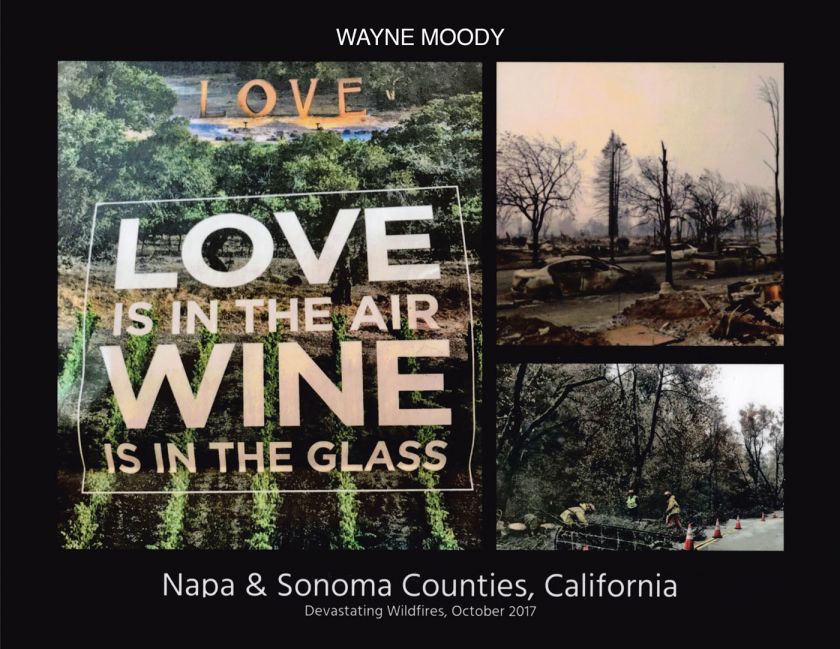 Wayne Moody, who earned a degree in engineering and afterward entered military service, has completed his most recent book “Love Is in the Air, Wine Is in the Glass”:  a brief yet informative take on the Tubbs Fire of 2017.
Wayne writes, “This publication was created to inform others of the recent California Wildfires. It focuses on the Tubbs fire in Santa Rosa, California, about 3 years ago, which, at that time was the most destructive Wildfire in California History. The publication is a pictorial record of the devastation caused by the fire.
Wildfires were created hundreds of millions of years ago to burn forests so new growth could replace the old. Volcanoes and lighting started the fires. Redwood forests grew to absorb moisture and moisturize dry forest materials to control burning. The beginning pages of the book show how the Sonoma Valley looked before the fire. Then there is a narrative of how the fire grew, followed by a pictorial display of the fire devastation.
I believe, having lived in California most of my life, the fire occurred in Santa Rosa, as creation of the Golden Gate bridge resulted in migration of industries from San Francisco to the North Bay. Sleepy small towns became Cities. Santa Rosa grew to 180,000 when the fire hit. Fires such as this can travel 7 miles per hour, and fire tornadoes can strike beyond the fire boundary.”
Published by Fulton Books, Wayne Moody’s book offers an insider’s perspective on an occurrence that is devastating on one hand and essential on the other.
Descriptive and somewhat contemplative, this book calls even deep-seated emotions to the surface with its use of vivid images that show the devastation left in the wake of the Tubbs Fire.
Readers who wish to experience this sobering work can purchase “Love Is in the Air, Wine Is in the Glass” at bookstores everywhere, or online at the Apple iTunes store, Amazon, Google Play or Barnes & Noble.
Please direct all media inquiries to Gregory Reeves via email at gregory@fultonbooks.com or via telephone at 877-210-0816.
Source: Fulton Books