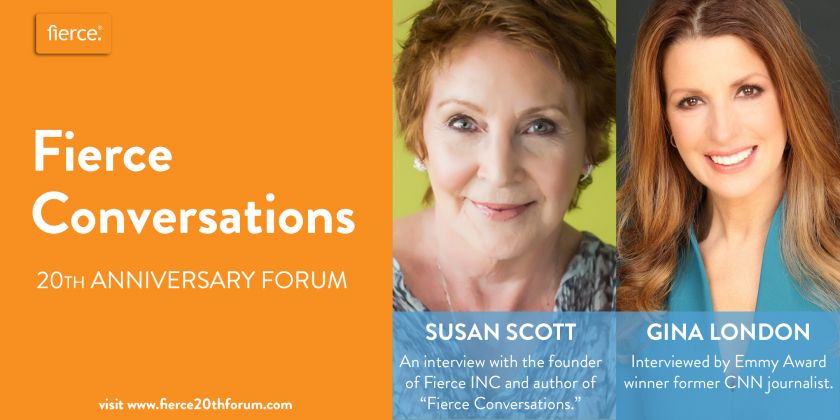 Visionary executive and author Susan Scott shares behind the scenes insights about her award-winning company with veteran broadcaster Gina London in a wide-ranging interview to celebrate the 20th anniversary of launching of Fierce Conversations, one the nation’s leading training and leadership development companies that has transformed executives into more effective communicators. The forum will air during the week of the 20th anniversary of Fierce on June 9th at 1p.m. at fierce20thforum.com.
During the lively and engaging conversation, London, an Emmy-award winning journalist, walks us through Scott’s adventurous journey. In the late1990s, Scott had a revelation after years of talking to and coaching CEOS: They had problems talking to each other, to their peers, to their employees and did not know what it was to hold an effective meeting. After much encouragement from her friends, Scott curated her learnings over the years to write her best-selling book, “Fierce Conversations: Achieving Success at Work and in Life One Conversation at a Time.” She’s also the author of “Fierce Leadership: A Bold Alternative to the Worst “Best” Practices of Business Today.”
Now, 20 years later, Scott’s award-winning company has worked with a who’s who in corporate America: Walmart, Verizon, Charles Schwab, Comcast, Costco, Domino’s, American Cancer Society, T-Mobile, and New York Life. In this special conversation, former CNN reporter Gina London chats with Susan to discuss how she revolutionized the way thousands of executives and managers communicate with each other at work – and at home. She talks about those early days of meeting a little-known business executive – Bill Gates – in a sparsely furnished office to later years when she traveled the country developing training and tools to help major executives and theirs become more effective leaders.
Scott offers sage advice about the need for us to become radically transparent and how we have to practice every day to become more effective conversationalists. She shares insights about the early days of Fierce Inc. and offers a sneak preview of her next project, “Fierce Love.”
“Over the years, I’ve learned so much from my conversations with these business leaders,” Scott says. “When we practice what we say, we begin to understand each other and work more effectively together.”
Ed Beltran, Fierce Conversations CEO, adds, “Susan has been a great inspiration to me and I’m grateful to have the opportunity to continue to build on the legacy she has created.”
To watch the conversation, go to Fierce20thforum.com. To sign up to learn more about Fierce go to fierceinc.com.
For more information contact neilfoote@ascendantgroupbranding.com or 214.448.3765
Source: Fierce INC