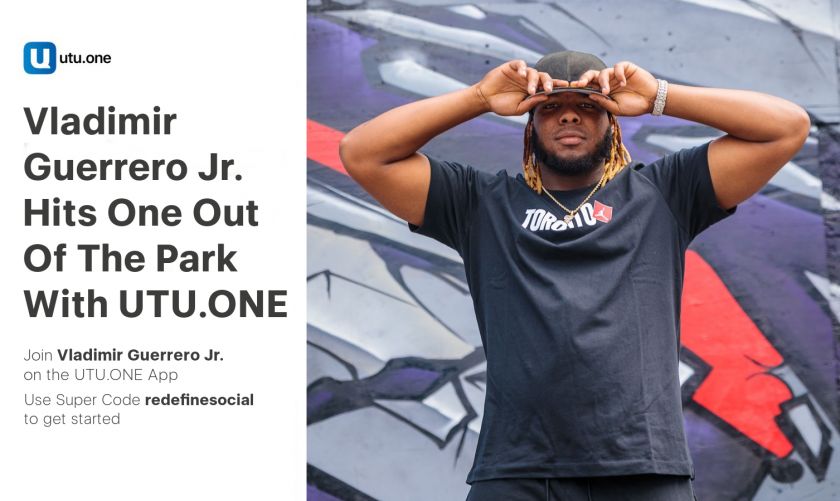 UTU.ONE, continues to expand its all-star sports lineup and social media reach with the announcement that second-generation star for the Toronto Blue Jays baseball team, Vladimir Guerrero Jr. will join the App as a key influencer in preparation for the official 2021 UTU.ONE launch. The move also opens the door to the massive NFT and global sports market.
Consistently ranked as one of the top prospects in all of baseball, 2021 has seen Vladimir Guerrero lead all of Major League Baseball in almost every offensive category including Average, Home Runs, RBI, HITS, and most recently Guerrero Jr became the youngest All-Star Game MVP in MLB history.
Guerrero Jr’s natural charisma makes him a great addition to the UTU.ONE social network that allows sports and baseball enthusiasts to connect directly with players through their own DACs (Decentralized Autonomous Communities) made available on the UTU.ONE social app.
UTU.ONE is the only platform that combines the token economy and NFTs with the power of social media and is the next generation social platform for real people offering unique features such as facial recognition sign-up and built-in NFT market designed to benefit UTU members for interacting with the platform and other members.
The UTU.ONE App is currently in an open beta test and can be downloaded from both Apple and Google stores.
Open Beta Test Apple: apps.apple.comOpen Beta Test Android: play.google.com
Once you have the UTU app, click “Signup” on the login page and use the invite code redefinesocial to get started.
About UTU Technology Inc. – The company was originated in both Australia and Canada with a group of experts in Blockchain, Artificial Intelligence, IoT, with business executives from IBM, Alibaba, Apple, and Deakin University’s Blockchain Innovation Lab. The company developed the world’s first DAC app for iOS and Android on EOSIO, in addition to many other blockchain business solutions and decentralized applications. In 2020, UTU technology Inc. made the strategic decision to establish its HQ in Toronto, Canada to further the company’s business expansions worldwide.
Information on the company can be found at: www.utu.one
For all media inquiries, contact: pressrelease@utu.one
Source: UTU.ONE