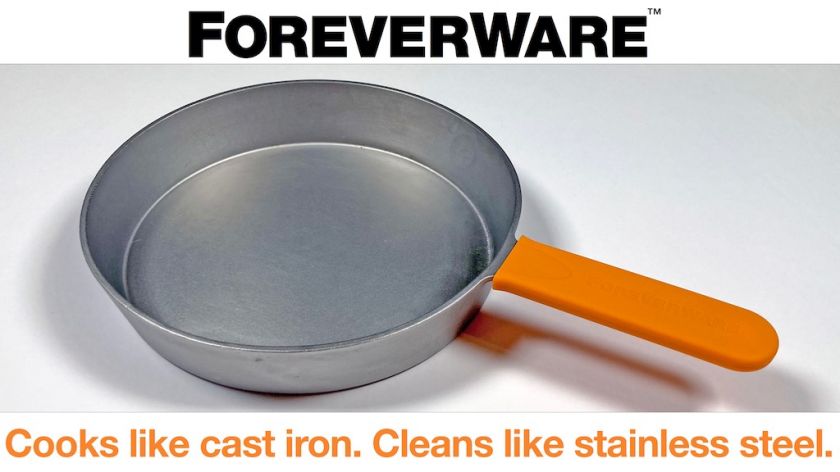 ForeverWare, Inc., a Tennessee-based cookware R&D and manufacturing company, today announces the availability of a completely new corrosion-proof metal it has named Stainless Cast Iron™ and the first cookware product manufactured from Stainless Cast Iron™: its 9-Inch Breakfast Skillet. The new skillet will be available on the Kickstarter crowdfunding site beginning Wednesday, June 9, 2021.
“We began researching a possible new metal to replace cast iron in cookware back in 2013,” says Scot Childers, ForeverWare’s CEO. “We started from work done by the DOE energy labs on superalloys for use in nuclear reactors and invested eight years of intense effort in translating that metallurgical R&D into an affordable, non-corroding, cast metal that we could eventually use to produce new consumer market cookware.”
The company states that its ForeverWare Stainless Cast Iron™ produces cookware with all of the expected cooking characteristics of cast iron pans but without needing oil seasoning to protect the pans from rusting — Stainless Cast Iron™ does not rust. The result is a pan that is used for cooking the same way as a cast iron pan but that is then easily cleaned and put away, without any special care or precautions.
“Our team has accomplished an amazing result — one that will have broad effects across the cookware market as people begin stopping their purchase of cast iron products and shifting to buying Stainless Cast Iron™ products from ForeverWare. Lots of people like cooking with cast iron. But, nobody likes having to deal with seasoning and caring for and repairing cast iron pans.”
The 9-Inch Breakfast Skillet is a solid five-pound casting of pure Stainless Cast Iron™, includes a slip-on silicone handle sleeve, and has a direct-to-consumer price of $129. It will begin shipping to customers in August 2021.
The company is running a 25-day Kickstarter campaign starting Wednesday, June 9, 2021, where the 9-Inch Breakfast Skillet will be available for pre-order for a pledge of $99, which includes USA shipping. That campaign can be visited at https://www.kickstarter.com/projects/foreverware/foreverware-stainless-cast-iron-skillet.
ForeverWare, Inc. is a Tennessee USA corporation. The company website is at www.foreverware.com. The company can be contacted at contact@foreverware.com.
Source: ForeverWare, Inc.