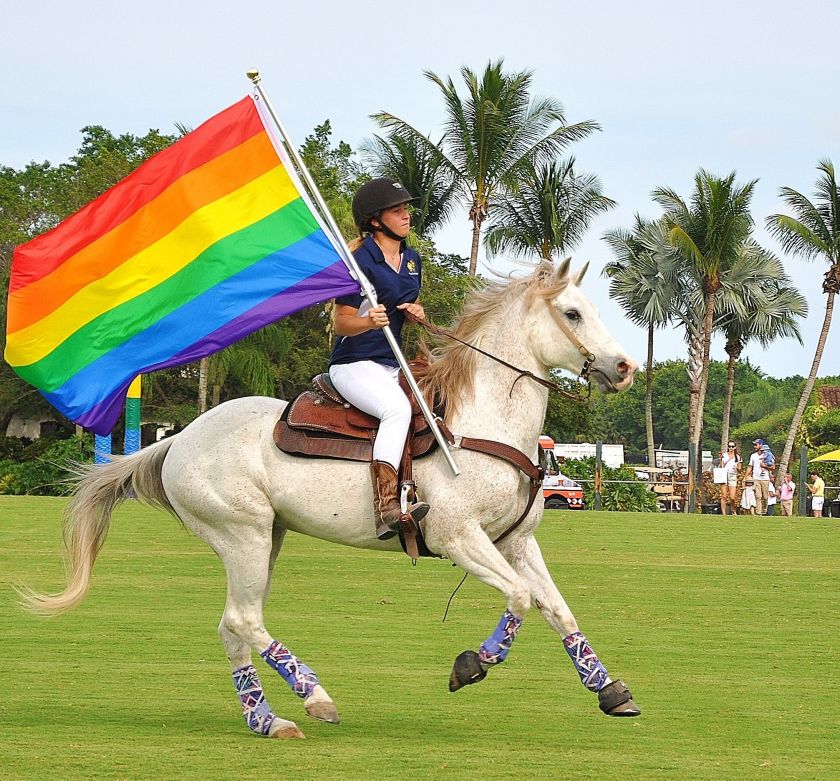 The Lexus International Gay Polo Tournament will be played from March 25 – 28 at the International Polo Club (IPC) in Wellington, Fla. Four teams, comprised of men and women, will be competing on the U.S. Polo Assn. field for two Trophies: The Senator’s Cup and The Founder’s Cup. The annual event raises money for SAGE, a national organization that advocates and provides services to LGBTQ+ elders.
“U.S. Polo Assn. supports philanthropic polo events around the world and we are proud to be sponsoring this exciting event,” said J. Michael Prince, President & CEO of USPA Global Licensing. “It’s meaningful to know that our support of the Gay Polo League will help increase participation and visibility of the LGBTQ+ community in the sport of polo and beyond.”
The Gay Polo League is dedicated to inspiring and empowering those individuals who identify themselves as lesbian, gay, bisexual, transgender and other non-traditional sexual or gender identities through the promotion of and participation in the sport of polo. In 2006 Chip McKenney founded the Gay Polo League with inclusion and acceptance being his top priority.
“GPL is proud to partner with U.S. Polo Assn., a globally recognized brand,” says Chip McKenney, the founder of the Gay Polo League. “For us, this partnership elevates awareness of GPL and LGBTQ+ polo players around the world. Furthermore, it is a powerful statement that U.S. Polo Assn. shares GPL’s dedication to promote equality and inclusion for everyone interested in the sport of polo.”
About U.S. Polo Assn. and USPA Global Licensing Inc. (USPAGL)
U.S. Polo Assn. is the official brand of the United States Polo Association (USPA), the nonprofit governing body for the sport of polo in the United States and one of the oldest sports governing bodies, having been founded in 1890. With a global footprint of $1.7 billion and worldwide distribution through more than 1,100 U.S. Polo Assn. retail stores, department stores, independent retailers and e-commerce, U.S. Polo Assn. offers apparel for men, women and children, as well as accessories, footwear, travel and home goods in 180 countries worldwide. Recently ranked the 5th largest sports licensor in License Global magazine’s 2020 list of “Top 150 Global Licensors,” U.S. Polo Assn. is named alongside such iconic sports brands as the National Football League, the National Basketball Association and Major League Baseball. Visit uspoloassnglobal.com.
USPA Global Licensing Inc. (USPAGL) is the for-profit subsidiary of the USPA and its exclusive worldwide licensor. USPAGL manages the global, multi-billion-dollar U.S. Polo Assn. brand and is the steward of the USPA’s intellectual properties, providing the sport with a long-term source of revenue. Through its subsidiary, Global Polo Entertainment (GPE), USPAGL also manages Global Polo TV and produces global broadcasts and live streaming that bring greater awareness to the sport of polo. Visit globalpolo.com.
About Gay Polo League
The Gay Polo League (GPL) is the only LGBTQ identified polo league in the world. Since its founding in 2006, GPL has built an international network of LGBTQ polo players and enthusiasts in 14 countries. The league embraces a cross-section of ages, abilities, professions and riding experience. Through its enthusiasm for the sport, the league works to foster positive perceptions about gay athletes and the LGBTQ community. The focus is to provide the LGBTQ community with opportunities to learn how to play polo and successfully compete in GPL tournaments and events. In 2017, GPL became a 501(c)(3) tax-exempt organization. This designation enables the Gay Polo League to use its events to benefit others and raise much needed funds for programs aimed at help those within the LGBTQ community. Visit gaypolo.com.
###
For further information contact:
Stacey Kovalsky – Senior Director, Global Communications
Phone +001.561.790.8036 – E-mail: skovalsky@uspagl.com
Shannon Stilson – AVP, Marketing
Phone +001.561.227.6994 – E-mail: sstilson@uspagl.com
Source: U.S. Polo Assn.