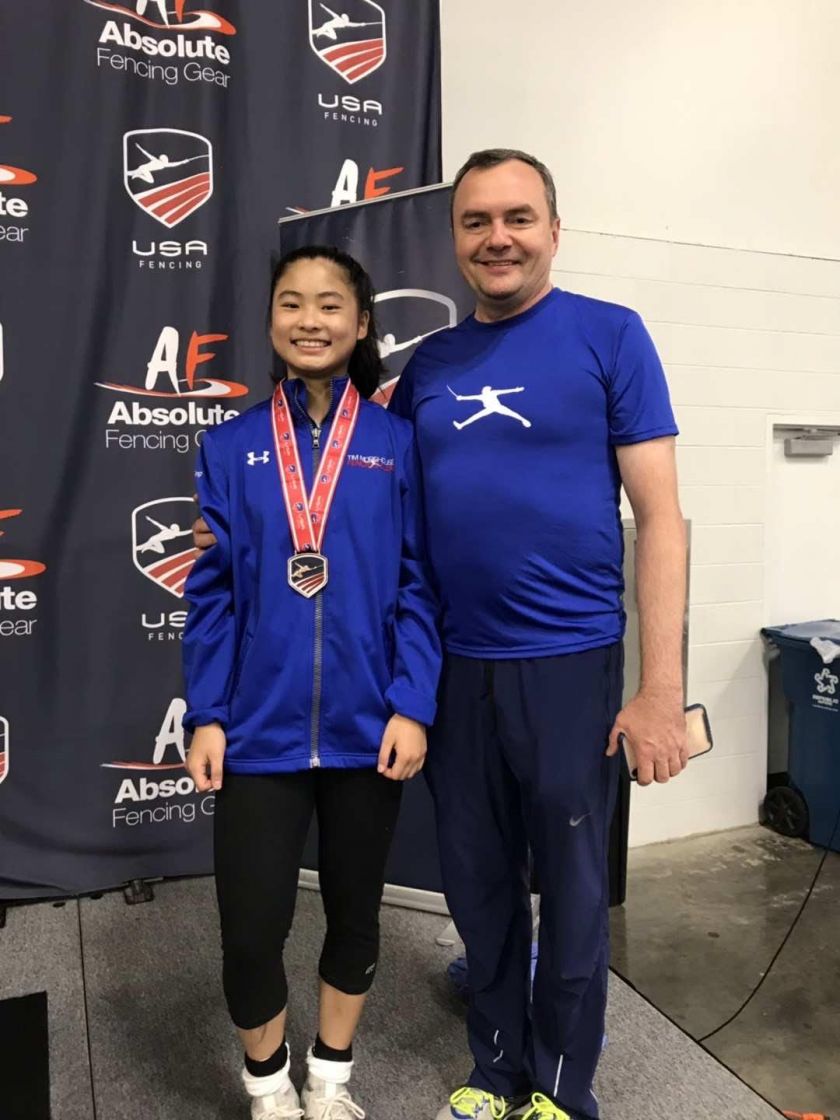 Tim Morehouse Fencing Club sent three talented student fencers to the Cadet-Junior World Championships in Cairo, Egypt, last week.
While all three athletes train and use the Port Chester-based club as their home club, each fencer competes for countries outside of the United States.
Sabrina Fang, a foil fencer, represents Team Canada and placed 13th out of 60 fencers in the cadet event. She also competed in the junior event. Sabrina has trained at Tim Morehouse Fencing Club for the past two years under Coach Slava Grigoriev. Coach Slava has encouraged her to find both her strengths and weaknesses, but to play to her strengths. She admits that both fencing and representing Canada are her passions.
Also a foil fencer, Kaitlyn McGillion-Moore represents Team Ireland, placed 34th in the cadet event and competed in the junior event. Known as “Katie,” she started fencing seven years ago and started working with Coach Slava at Tim Morehouse Fencing Club two years ago.
“It was a great opportunity to compete internationally, but for me, it’s a real connection to my heritage and my parents’ upbringing,” Katie said. “It connects me to family and friends in Ireland that are proud of me.”
Speaking of her coach, Katie added, “Slava brings a rare form of commitment. He lives for the ups and downs of his students. He loves when they do well, but he shares the pain when they don’t. He is very dedicated to helping me improve. I constantly remind myself that he pushes me hard because he cares.”
David George Pavlinishvilli, an epee fencer, competes for the country of Georgia. With stiff competition, he was able to place 25th in the cadet epee event. He also competed in the junior epee event. Alex Zurabishvili coaches David.
Tim Morehouse Fencing Club is proud to pilot an in-club on-demand COVID testing program that has allowed competitors like these to continue training at an elite level all throughout the pandemic. These athletes and staff tested before arrival in Egypt and tested and quarantined after they arrived in Cairo.
Tim Morehouse Fencing Club in Port Chester was founded by Olympic silver medalist Tim Morehouse and opened in 2017. The club provides training to athletes in New York City (Upper West Side, Manhattan), Westchester and Connecticut in foil, epee and saber. Tim Morehouse Fencing Club was the leader in the country for High School All-Americans in 2020-2021 and, based on the number of national medals its fencers won, was ranked the #1 Youth Fencing Club in the Country for the past two years.
Tim Morehouse Fencing Club hosts Youth Champions Summer Camps in Port Chester and Manhattan each summer for kids of all levels — beginner, intermediate and competitive fencers — ages 6-12.
For More Information and Sign-Ups:
Tim Morehouse Fencing Clubwww.timmorehousefencing.com
Press Contact: Katie Waylett Phone: (317) 886-8243
Source: Tim Morehouse Fencing Club