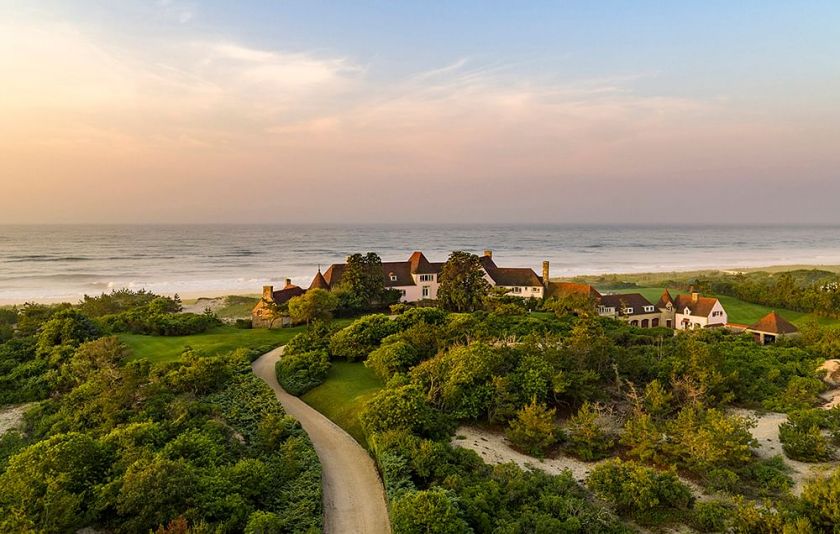 The storied Southampton estate known as Ocean Castle gets its name from its turrets and sheer size—19,000 square feet with more than eight acres and 500 feet of prime frontage on the Atlantic. But anyone who has gaped at its sprawling series of wings, nooks and entrances likens it more to a medieval European village.
Businessman William F. Ladd commissioned Peabody, Wilson, and Brown architects to design his dune-nestled vision, completed in time for the summer season in 1929. For their Francophile client, they emulated the Gallic countryside with a concrete composite exterior fashioned to mimic the native, building stone found throughout its northern coastal regions like Normandy. The trompe l’oeil created buzz in the American design world at the time. Rust-red roof tiles, manufactured in Colorado of all places, also celebrate provincial France. Today’s developers dream of sourcing Ocean Castle’s oak half-timber work used for its exterior embellishment and cathedral ceiling’s rafters in the living room; naturally weathered at the bottom of a lake, the wood’s further exposure to the elements after it was installed ensures timeless quality and character that one doesn’t come across too often.
Rambling rooms—30 in total—surprise and delight with their unexpected details. One boasts a 17-foot-high ceiling, while another’s windows form the shape of a ship’s bow. Innovative design features include the dining porch’s system to raise and lower plate glass windows and screens to enjoy ocean breezes on pleasant days.
Previous owners have added other amenities throughout the years. The heated, gunite pool spans 48 feet with an attached spa pool. There are also a tennis court, fitness center, sauna and game rooms that conjure childhood trips to Coney Island.
The attached staff quarters are conveniently located to the west of the garage bays and accessible from the service driveway. Everything else is located under one roof. Fifteen bedrooms include seven with ocean views and four for staff. Mrs. Ladd’s original bedroom features knot-free white pine rafters to complement its soaring, floor-to-roof open plan. Though some of the home’s rare design elements are destined to be keepers, new owners will most likely want to create their own vision just as Mr. Ladd did. Whether faithfully restored or slated for a full renovation in a whole new direction, Ocean Castle’s story is to be continued.
840 Meadow Lane, Southampton, N.Y., is listed for $75,000,000.
See the video here…
See the listing here…
Source: Tim Davis, Power Broker