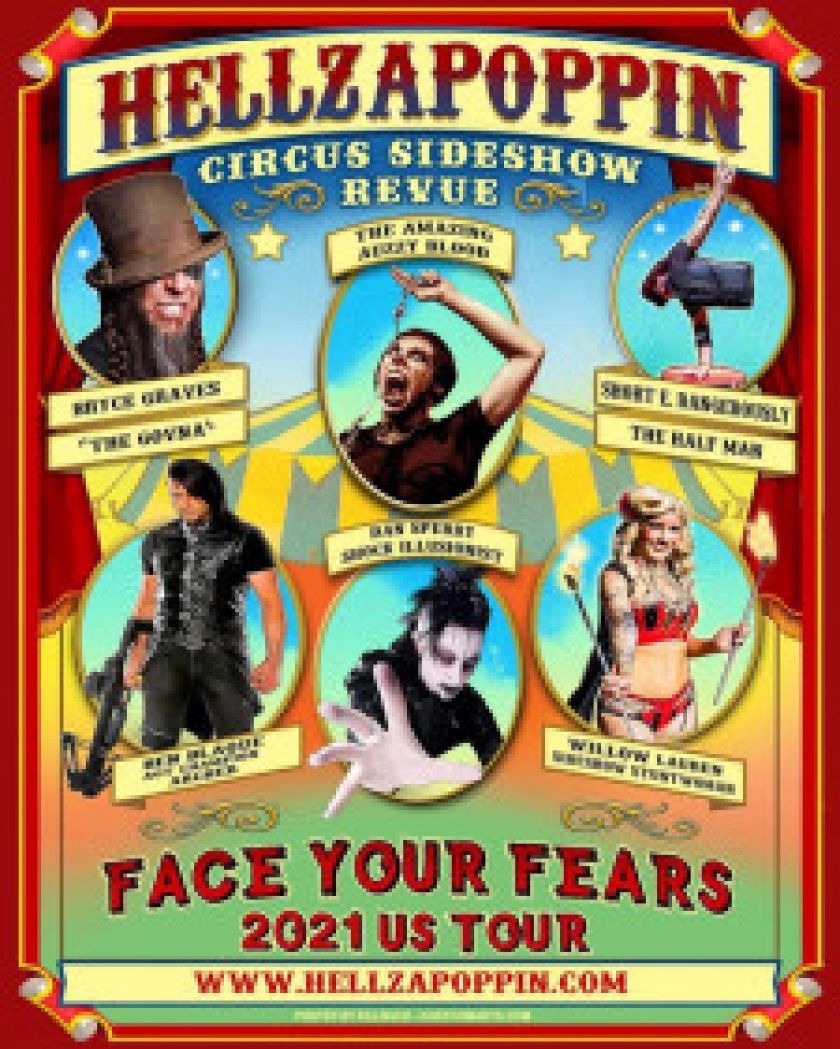 Hellzapoppin, the world’s greatest international touring rock-n-roll circus sideshow thrill-show extravaganza, will be bringing the “Face Your Fears” tour to Omaha, Nebraska. The theatrical circus thrill-show will be performing some of the deadliest stunts in live entertainment at the Waiting Room, where show-goers can catch the action at 8 p.m. on April 1.
In the past three years, Hellzapoppin has performed over 400 shows in 16 different countries. The group performed with bands such as Avatar, In This Moment, John 5, and Mushroomhead in front of millions of people at some of the world’s biggest and most famous festivals, such as Wacken Festival in Germany, Riot Fest in Chicago, and Alcatraz Festival in Belgium.
“After an extensive wait caused by the pandemic, we are back and better than ever before,” said Hellzapoppin’s ringleader and producer, Bryce “The Govna” Graves. “Our first few shows have been insane from start to finish, and we are nowhere near close to done yet. We are ready to rejuvenate the spirits of our audiences, one city at a time. Omaha, here we come.”
Hellzapoppin’s performers include the world’s most amazing half-man, Mr. Short E. Dangerously, AGT Champion Crossbow artist Mr. Ben Blaque, the spellbinding fabulous woman of enchantment Ms. Willow Lauren, and Mr. Auzzy Blood, formerly of Cirque Du Soleil in Las Vegas, as well as feature performer Dan Sperry, a world-renown shock illusionist known as the Rockstar of Magic.
The performers have quite a resume to go with their acts – they have been been featured on a wide variety of major television shows, including but not limited to Fool US with Penn and Teller, Masters of Illusions, Germany’s Das Supertalent, World Magic Awards, AMC’s Freakshow, America’s Got Talent, Britain’s Got Talent, Wild Card Show, I Can Do That, and the best-selling magic show in Broadway history, The Illusionists!
To learn more about Hellzapoppin’s passion-fueled performances and for tickets to their “Face Your Fears” tour, please visit https://waitingroomlounge.com/event/hellzapoppin-circus-freak-show.
About
HELLZAPOPPIN is the world’s largest touring rock-n-roll circus freak show, thrill show, sideshow & stunt show extravaganza! We’re mavericks, trailblazers, rebels, rule-breakers, outlaws…true uninhibited artists. We deliver our message through sideshow and fuel our art through passion. Named after the most successful Broadway musical and movie from the late ’30s and ’40s, Hellzapoppin is a world-renowned theatrical circus thrill-show where some of the deadliest stunts in live entertainment are performed to loud crowd-pleasing musical tracks.
Contact Information
Bryce “the Govna” Gravesbryce@hellzapoppin.com
Media Inquiries:morganpr@newswire.com
Source: Hellzapoppin