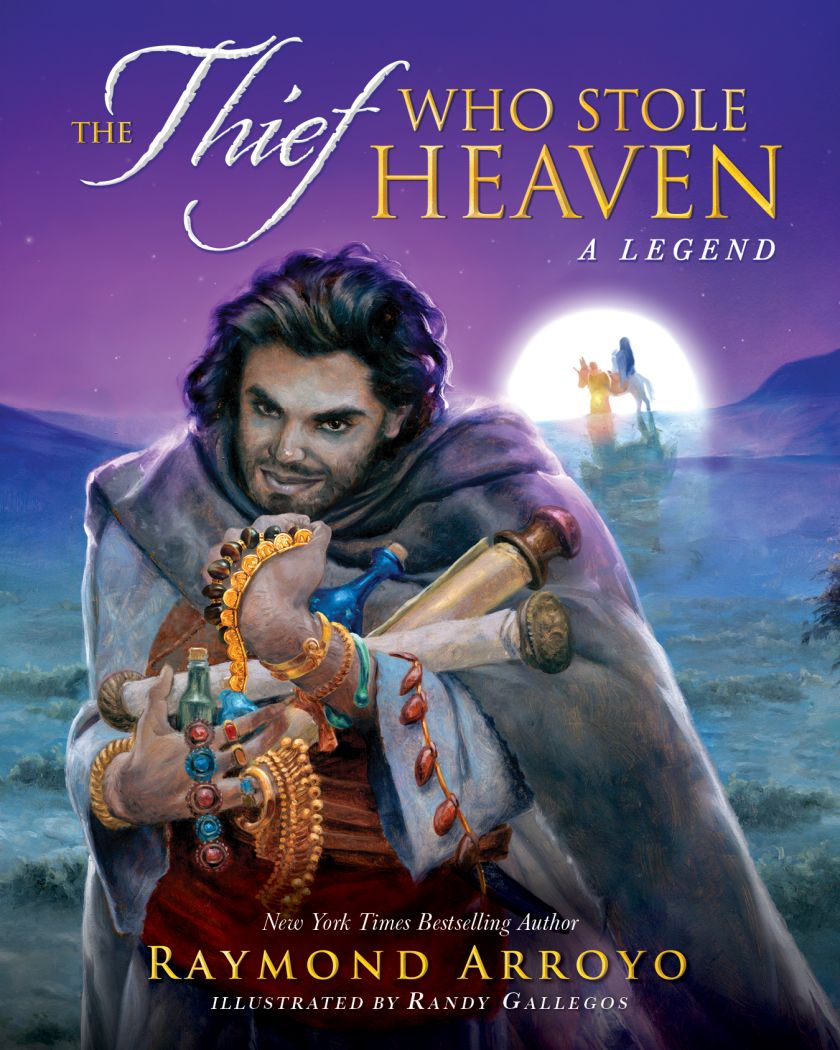 Today’s parents, their children, and educators can now add another classic to their bookshelves, as the cherished “Legend” series releases a new volume for audiences to create enduring holiday memories. On the heels of the success of the first installment in the series, The Spider Who Saved Christmas, comes The Thief Who Stole Heaven, slated for release on March 9, 2021.
Find more details here:  https://www.amazon.com/Thief-Stole-Heaven-Raymond-Arroyo/dp/1644132389/ref=sr_1_3?dchild=1&keywords=The+thief+who+stole+heaven&qid=1611765298&sr=8-3
Best-selling author Raymond Arroyo returns with another legacy-enhancing title to his portfolio of strikingly beautiful and inspiring works. The story unfolds through his transformative approach to the way children learn to read and with an appeal that reaches across generations. The Thief Who Stole Heaven introduces audiences to the largely hidden character of The Good Thief. Bridging the gap between Christmas and Easter, this unique story brings to life a compelling tale of redemption destined to be treasured and revisited year after year.
The critically acclaimed “Legend” series debuted in the fall of 2020 with The Spider Who Saved Christmas, which topped the New York Times, USA Today, Amazon and Barnes & Noble Bestseller lists, further evidence of a deeper resonance with consumers across America and a welcome antidote to today’s more gimmick-oriented offerings. “Spider” also received coverage from outlets such as NPR, The Dallas Morning News, Fox & Friends and beyond.
The Thief Who Stole Heaven is the second installment as part of a larger “Legend Series” of self-contained, episodic stories.
About Raymond Arroyo
Raymond Arroyo is a New York Times bestselling author, an international broadcaster and Fox News Contributor who has worked for CNN and the Associated Press. He is also host and managing editor of “the World Over Live” on EWTN. Mr. Arroyo has made frequent appearances on The Today Show, Good Morning America, The Ingraham Angle, CNN Headline News, Access Hollywood and many more. His work has appeared in the Wall Street Journal, The Financial Times, Newsweek, Time Magazine, The New Yorker, and elsewhere. A native New Orleanian, Mr. Arroyo is passionate about sharing the unique culture of his beloved Crescent City and the great state of Louisiana. Earning a Telly Award, Arroyo produced, wrote and hosted a musical Christmas special for PBS called Christmastime in New Orleans with eponymous Billboard chart-topping soundtrack (Verve Records/AimHigher).  He has produced other Billboard topping musical projects including “The Birth of Christ” with Liam Neeson (Sony Classics).  His eight books, including his biography of Mother Angelica and his Best-selling multi-book Will Wilder Middle Grade series (Random House Kids) were all New York Times Bestsellers. Known for his penetrating interviews, Arroyo has interviewed the leading figures of the day. Highlights include: Mother Teresa of Calcutta, Mel Gibson, Wendell Pierce, Placido Domingo, DeVon Franklin, Chef Leah Chase, Mary Higgins Clark, Aaron Neville, Tim Conway, Irma Thomas, Mark Burnett, Martin Sheen, Johnny Mathis, Jose Feliciano, Harry Connick Jr., and a groundbreaking interview with comic legend, Jerry Lewis, to name just a few.
Contact: Monica Fitzgibbons, FitzPR
mfitzpr@gmail.com
310.849.1686
DiscoverLegends.com
Source: Raymond Arroyo