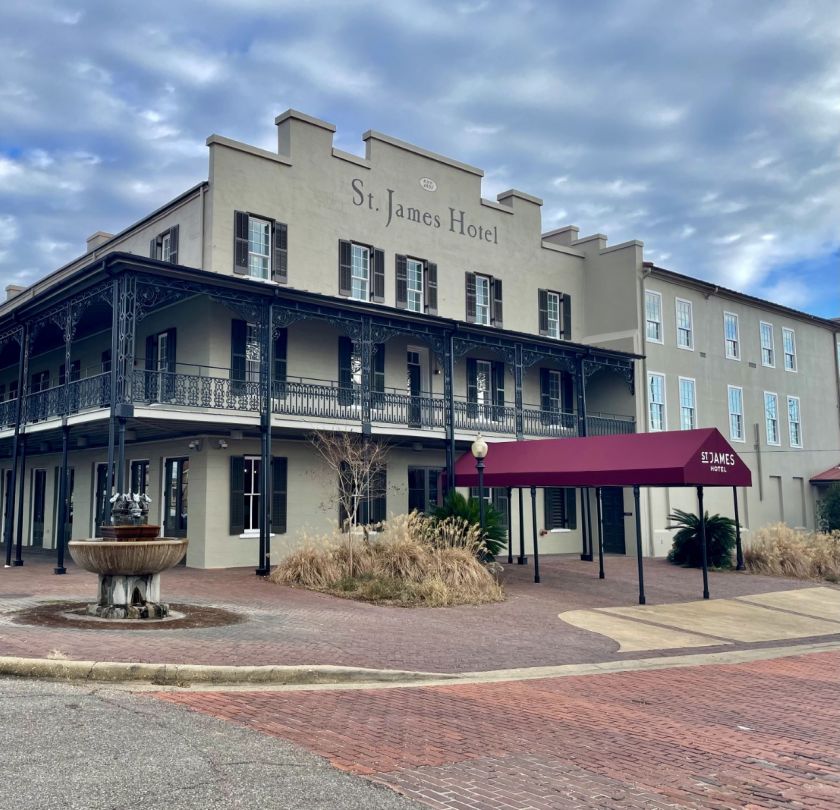 Rhaglan Hospitality is pleased to announce the opening of The St. James Hotel in historic Selma, Alabama. Sitting adjacent to the Edmund Pettus Bridge and the Alabama River, the main building of the hotel was constructed in 1836. It is the only riverfront pre-Civil War era hotel still in existence.
Rhaglan Hospitality acquired the property in 2018 and began renovating the entire property, adding 13 guest rooms that overlook the Edmund Pettus Bridge. From the original oil paintings in the guest rooms to the period antiques in the common areas to the brick courtyard, the St. James has been redesigned to retain the historic features of the property while incorporating contemporary design elements throughout.
The St. James has a full-service restaurant and bar, Sterling, which was named after a former slave who operated the hotel in the 1800s, Benjamin Sterling Turner. Guests can begin their evening with a cocktail in the hotel’s gas-lit courtyard followed by dinner in the cozy bar area by one of the two original fireplaces or in the mirror-lined main dining room.
The acquisition, renovation and additions were made possible in part with financing provided by American South Real Estate Fund (ASREF), an impact fund focused on low-income community projects throughout the South, and an Opportunity Zone investment from the Woodforest CEI- Boulos Opportunity Fund, established by Woodforest National Bank® and CEI-Boulos Capital Management. In speaking about its involvement in the property, Deborah La Franchi, Managing Partner of ASREF, stated, “ASREF is a proud financial partner in this highly catalytic project. The re-opening of the St. James Hotel will be transformative for downtown Selma – a historic keystone of our country’s struggle for civil rights.”
Doug Schaeffer, Executive Vice President, CRA Executive Director, Woodforest National Bank, further noted with respect to its investment: “Woodforest’s investment in the St. James Hotel, through its Woodforest CEI-Boulos Opportunity Fund, will not only help revitalize Selma’s downtown, but it also provides quality jobs for Selma residents. We are proud to leverage the Opportunity Zone program the way it was intended by investing in communities like Selma that have underutilized assets and important history that needs to be preserved.”
The opening of the St. James is a milestone for the economic development of the City of Selma. The property will provide nearly 50 new jobs. Rhaglan, American South and Woodforest CEI-Boulos Opportunity Fund are all proud of being able to cultivate local talent in this development.
Rhaglan CEO Jim Lewis has noted, “This project could not have gotten done without the unwavering support of the City of Selma and its citizens. We feel so privileged to be a part of this special community. At a time when our nation is so divided, it is nice to see people from all walks of life come together to produce a positive result for all.” MEDIA CONTACTRhaglan Hospitality, LLC James.LewisIII@hilton.com krushin@joneswalker.com
Source: Rhaglan Hospitality