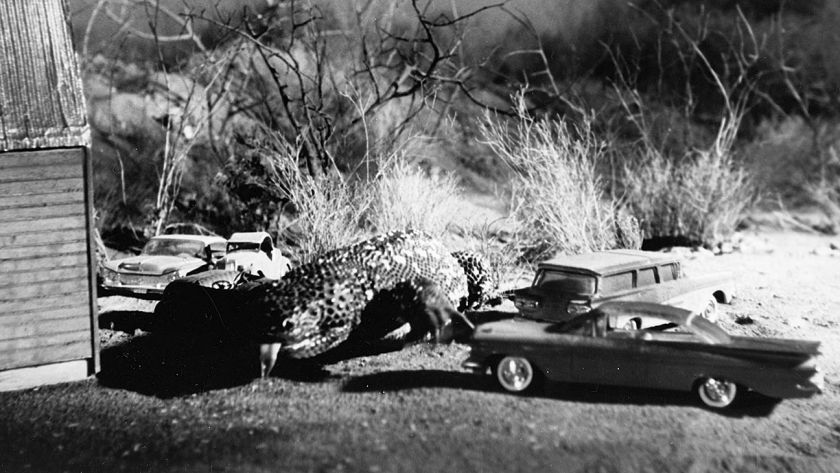 Cinedigm, the leading independent streaming company super-serving enthusiast fan bases, announced today that The Film Detective, the classic media streaming network and film archive that restores and distributes classic films, is featuring classic creature features throughout the month of August on its 24/7 classic film and television channel.
As part of the weekly Double Feature, Fridays at 8 PM ET, The Film Detective will premiere a newly restored HD print of the Roger Corman classic The Wasp Woman (1959) and films like Island Claws (1980), recently arrived from the Films Around the World library, acquired by Cinedigm in March 2021.
The Film Detective month of creature features will be accented by a Creature Feature Giveaway, sponsored by The Film Detective, where fans will have the chance to win DVD prize packages of classic features, Creature from the Haunted Sea (1961), The Giant Gila Monster (1959), and The Killer Shrews (1959), starting August 6.
New arrivals coming to The Film Detective in August will include a restoration of the science-fiction horror film Horror Express (1972), starring Christopher Lee and Peter Cushing and films starring Leave it to Beaver’s Hugh Beaumont, Larceny in Her Heart (1946) and Blonde for a Day (1946), from Films Around the World.
Coming to The Lone Star Channel, The Film Detective’s 24/7 western channel, will be 30 episodes from Cowboy G-Men (1952-1953) starring Russell Hayden and Jackie Coogan and classic western films including Sitting Bull (1954), Tombstone Canyon (1932), and Hurricane Horseman (1931).
Drums of Fu Manchu (1940), the action-packed serial starring Henry Brandon and William Royle will join The Film Detective’s Serial Sundays, at 9 AM ET on Sundays in August. Comedy icon Lucille Ball will also be honored in August with a Lucille Ball Birthday Marathon, Aug. 5-6.
For more information, visit www.thefilmdetective.com.
Contact:
Kerry Ryan
kerry@thefilmdetective.com
About The Film Detective:
The Film Detective is a leading distributor of restored classic programming, including feature films, television, foreign imports, and documentaries and is a division of Cinedigm. Launched in 2014, The Film Detective has distributed its extensive library of 3,000+ hours of film on DVD and Blu-ray and through leading broadcast and streaming platforms including TCM, NBC, EPIX, Amazon, MeTV, PBS, and more. The Film Detective has released its classic movie app on web, Android, iOS, Roku, Amazon Fire TV, and Apple TV and is available live on Sling, STIRR, Plex, and DistroTV. For more information, visit www.thefilmdetective.com.
About Cinedigm:
For more than twenty years, Cinedigm has led the digital transformation of the entertainment industry. Today, Cinedigm entertains hundreds of millions of consumers around the globe by providing premium content, streaming channels and technology services to the world’s largest media, technology and retail companies. For more information, visit http://www.cinedigm.com.
Source: The Film Detective