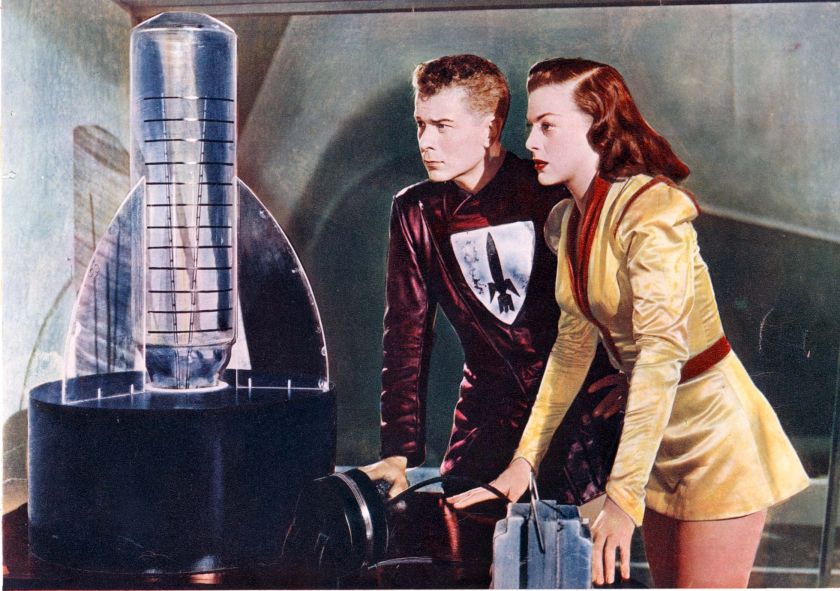 Cinedigm announced today that The Film Detective, the classic film restoration and distribution company, will be celebrating films from the science fiction genre throughout the entire month of July.
The Film Detective’s month of Stars Under the Stars will include a different double-feature of science fiction drive-in classics every Friday at 8 p.m. ET. Featured classics will include Killers from Space (1954) starring Peter Graves, as well as the newly restored 4K transfer of Battle of the Worlds (1961) starring Claude Rains, coming in July.
The Film Detective will also be getting into the holiday spirit with a Christmas in July celebration of the “schlockiest” seasonal titles like Santa Claus Conquers the Martians (1964) and Santa Claus vs. the Devil (1959), mercilessly roasted by Mystery Science Theater 3000 (1988-1999) and Cinematic Titanic (2007).
The Film Detective’s science fiction celebration comes in anticipation of its 70th anniversary Blu-ray ($24.95) and DVD ($19.95) release of Flight to Mars (1951) on July 20. The release will include an out-of-this-world 4K transfer sourced from the 35mm Cinecolor separation negatives, beautifully restored by the Paramount Pictures Archive; special features including two brand new documentaries, Walter Mirisch: From Bomba to Body Snatchers and Interstellar Travelogues: Cinema’s First Space Race, from Ballyhoo Motion Pictures; audio commentary with author/film historian Justin Humphreys; and a full-color booklet with essay Mars at the Movies from award-winning author Don Stradley. The Film Detective’s Flight to Mars (1951) release comes as the third in a series of collaborations with The Wade Williams Collection.
Coming to Serial Sundays on The Film Detective will be episodes from the classic serial Flash Gordon Conquers the Universe (1940), starring Olympian-turned-leading-man Buster Crabbe, every Sunday at 9 a.m. ET throughout July.
New arrivals on The Film Detective this month will include episodes from the second season of The Beverly Hillbillies (1961-1971) and the classic Max Fleischer cartoon Popeye the Sailor (1937-1957), coming to The Film Detective’s Saturday morning cartoons. New feature film arrivals throughout July will include stunning new HD restorations of classics like Abbott and Costello’s Jack and the Beanstalk (1952) and Films Around the World acquisitions including Graverobbers (1988) and Island Claws (1980). Coming to The Film Detective’s 24/7 western channel, The Lone Star Channel, will be episodes from the 1960s western series Tate (1960), starring David McLean and guest starring Robert Redford.
For more information on The Film Detective’s July lineup, visit www.thefilmdetective.com. To pre-order The Film Detective’s special edition release of Flight to Mars (1951) on Blu-ray ($24.95) or DVD ($19.95), visit https://www.thefilmdetective.com/flight-to-mars.
Contact: Kerry Ryan kerry@thefilmdetective.com
About The Film Detective:
The Film Detective is a leading distributor of restored classic programming, including feature films, television, foreign imports, and documentaries and is a division of Cinedigm. Launched in 2014, The Film Detective has distributed its extensive library of 3,000+ hours of film on DVD and Blu-ray and through leading broadcast and streaming platforms including TCM, NBC, EPIX, Amazon, MeTV, PBS, and more. The Film Detective has released its classic movie app on web, Android, iOS, Roku, Amazon Fire TV, and Apple TV and is available live with a 24/7 channel on Sling TV, STIRR, Plex, Local Now, Rakuten TV, and DistroTV. For more information, visit www.TheFilmDetective.com.
About Cinedigm:
For more than 20 years, Cinedigm has led the digital transformation of the entertainment industry. Today, Cinedigm entertains hundreds of millions of consumers around the globe by providing premium content, streaming channels and technology services to the world’s largest media, technology and retail companies.
Source: The Film Detective