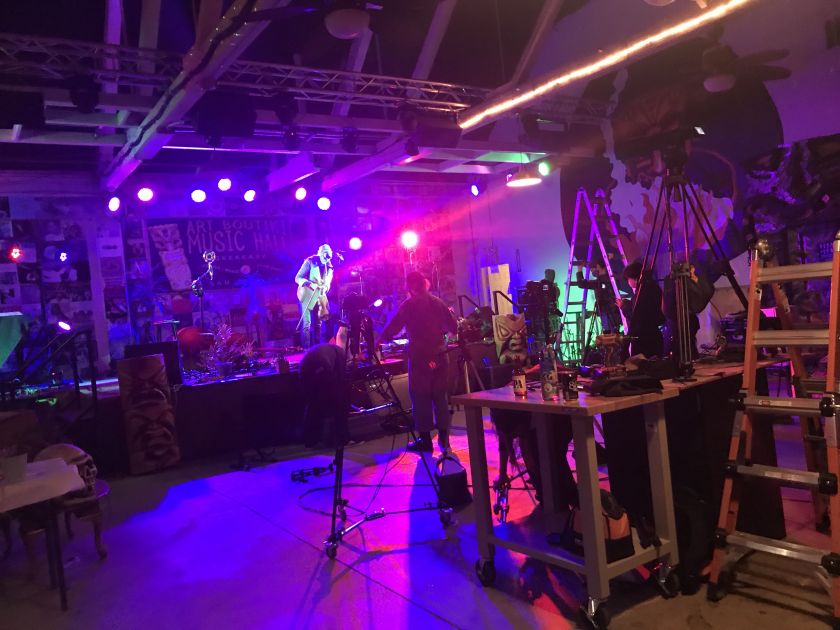 For the Art Boutiki Music Hall in San Jose, CA, Friday, March 13, 2020, was unlucky because that was the last day for live music with an audience at the 11-year-old venue.
The day started with a message from LA-based keyboard player Kait Dunton, who was performing and was preparing to leave for San Jose. “She wanted to know if she should come,” said Art Boutiki owner Dan Vado. “We chatted, and I told her I would understand if the band did not feel comfortable coming.” Dunton made the trip, but the day became the oddest in Art Boutiki’s history. Phone calls started from ticket holders. “People wanted to know if we were going to be open, some wanted their money back, others wanted to know if they should wear masks and how we were going to manage the crowd.”
Most ticket holders requested refunds and a potential sell-out only had 40 people attend. Members of both Dunton’s band TrioKate and headliner Idiotfish elected to wear masks, which at the time was not normal.
Shut-down orders came and Art Boutiki closed. “The minute stay-at-home orders came I knew we were going to start a live stream program,” said Vado “it seemed simple, it turned out to be the exact opposite.” Known in Silicon Valley for the quality of its sound, an Art Boutiki Livestream had to hold up to the quality of their in-person shows. The Art Boutiki invested in video equipment that could broadcast a show in high quality; what gear they could not afford they borrowed from friends. The crew quickly worked to master the art of video production. Finally, in August, Live from The Art Boutiki was born.
Approaching the one-year anniversary of the last in-person show The Art Boutiki Online Concerts kept live music alive during shutdowns. “This past year has been full of learning experiences,” said vocalist Ren Geisick, a regular performer at Art Boutiki both before and after shutdowns ” it brings me so much comfort to know that Art Boutiki is still out here creating awesome music experiences.  Art Boutiki shows are always a great experience for the audience and the musicians.”  Ms. Geisick added “The same is true now in the virtual world. A show at Art Boutiki is like coming home.”
“Live-streaming is going to be with us for a while longer, longer than people think” added Vado. “While the anniversary of being shut down is nothing to celebrate, it is worth celebrating the staff and the artists who committed themselves to keeping the idea of live music alive”. The venue’s long-time motto, “Too Stupid To Quit, Too Mean to Die has never been more true.
Live from The Art Boutiki is broadcast twice-a-week. All of the shows are currently free but require registration to access the stream.
For  the current schedule and for more information on The Art Boutiki, please visit the website at www.artboutiki.com or contact Dan Vado at kahuna@artboutiki.com
Established in 2009 The Art Boutiki Music Hall is an offshoot of venerable comic book publisher SLG Publishing. The Art Boutiki presents both local and touring musical acts in a wide variety of genres including jazz, bluegrass, rock, country. With a focus on original material and it’s all-ages status, The Art Booutiki Music Hall has been a valuable part of the Silicon Valley Arts community for over a decade.
Source: The Art Boutiki Music Hall