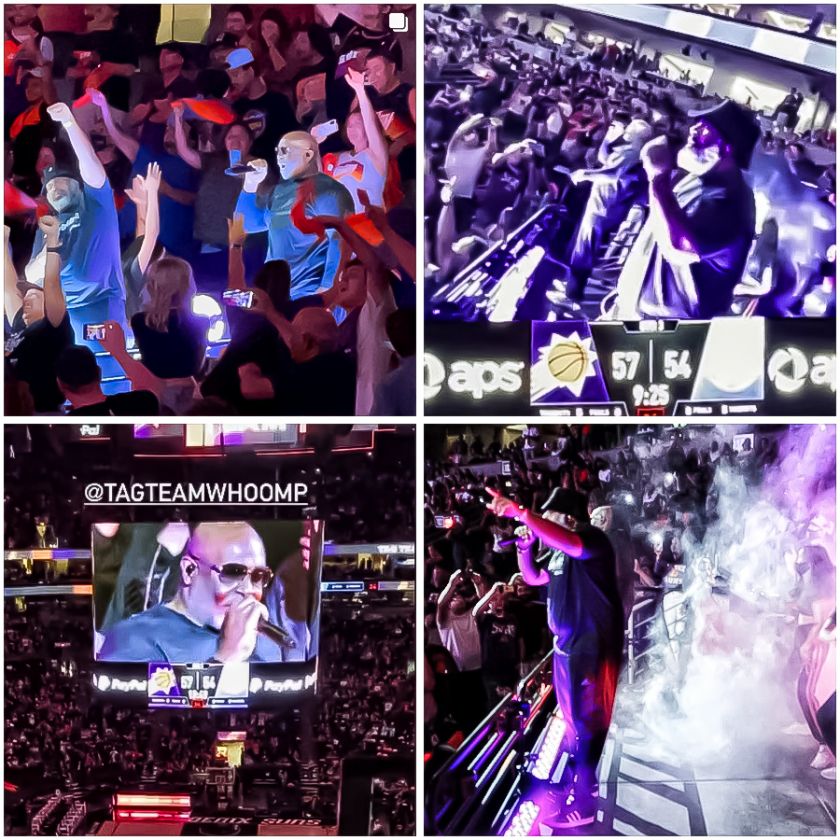 Tag Team capped off the inaugural Juneteenth holiday and Father’s Day weekend with an electrifying halftime performance at the NBA Western Conference finals. In a sensational game one, the Phoenix Suns outlasted the Los Angeles Clippers for the 120-114 victory. Tag Team introduced a new generation of fans to the fun-filled vibes and energy of “Whoomp! (There It Is)” – the iconic ’90s anthem that has become a staple in American sports arenas and stadiums.
During the first half of the game, Suns fans were ecstatic to discover that the darlings of their favorite GEICO commercial would soon be entertaining them. When halftime arrived, DC The Brain Supreme kicked off the performance with the iconic opening of “Party People!!!”
The arena was electric as fans sang along to the well-known lyrics of “Whoomp!”. The energy soared even higher when Tag Team incorporated a few “Scoop! There It Is” verses from the commercial. The raucous performance concluded with the Phoenix Suns’ call to action faves “Everything Counts” and “Rally the Valley.”
2021 continues to be an epic year for the Tag Team duo, DC Glenn and Steve Rolln. They started a relationship with WWE by appearing on their hit show The Bump, are negotiating to perform at the NHL Stanley Cup Playoffs and during the upcoming NFL season, and continue to gain traction from their wildly popular GEICO commercial.
On the solo side, DC Glenn is excelling in his acting and voiceover career. He has just wrapped a co-starring role on the second season of BET’s Games People Play television series and is training to become one of the movie industry’s leading ADR specialists. He is also being featured in the documentary #MYCorona, set to release this summer.
Want to meet DC in person? Catch him at this year’s Comic Conroe conference in Texas on July 24 and 26. You can also catch Tag Team on tour this summer at a city near you:
Sat, JULY 3  MCTX Independence Day Festival  Missouri City, TX
Sun, JULY 4  Smoke BBQ and Sky Bar  San Antonio, TX
Sat, July 10  ’80s, ’90s Day Party Cocoa, FL
Sat, July 24  TAG TEAM LIVE IN CONCERT  Ventura, CA
Get in Touch:
dcglenn@tagteambackagain.com
470-381-8370
Socials  –  @TagTeamWhoomp  –  @DCGlennATL
DC Glenn Acting & VO Representation – The People Store Agency – (404) 874-6448
Book DC Glenn as an expert talk show and podcast guest.
Source: Tag Team