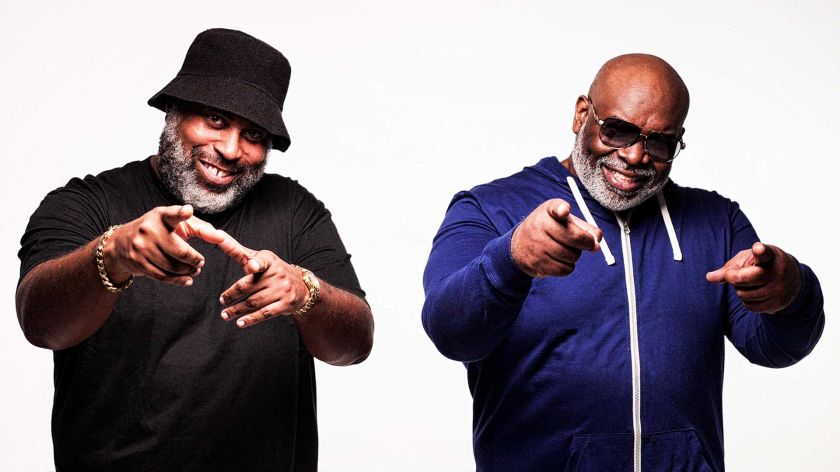 The 10th and, so far, most exciting event of the 2021 NASCAR Cup Series, the GEICO 500 at Talladega Superspeedway, started off with a bang on Fox thanks to a surprise virtual visit by two of this year’s most loved pop culture icons, DC the Brain Supreme (DC Glenn) and Steve Rolln (Gibson) of Tag Team. The multi-platinum hip-hop duo, who are having an explosive 2021 after starring in the viral phenomenon, “Scoop….There It Is!”, the GEICO commercial everyone is still talking about, revved up the energy levels in seconds with the famous words, “Drivers, start your engines!”
This was the first time Tag Team served as Grand Marshals for a NASCAR Cup Series event, and it was a fitting start to an overtime win by Brad Keselowski at NASCAR’s biggest and most competitive racetrack.
Twitter went into overdrive seeing the kings of good vibes at the start of the race. @angelabryant728 said, “I’d start my little engine every time Tag Team cheered me on,” and @TheKaBG tweeted, “Yes! That might have been one of my favorite commands to start engines…EVER!”
According to their booking agent, Seth Cohen of Pyramid Entertainment, concert dates are filling up fast. 2021 has been a huge year so far for the artists. “The timing is on point. DC and Steve are two of the most uplifting artists out there, and people are really craving the authentic energy they deliver.”
This year has been a whirlwind for group member DC Glenn, aka Mr. Sprinkles, in particular. He has been on a jampacked publicity tour with interviews and appearances on podcasts, radio, and television. While sharing his story of reinvention during the pandemic, DC has emerged as one of the most motivational voices in the entertainment industry.
After decades of elevating crowds through music, DC’s transition to working actor and voiceover artist is now complete. This comes after meticulous training during COVID, when he underwent repetitive craft building, alongside fellow actresses Keisha Thompson, Danielle Alonzo, T. Shyvonne Stewart, and Mikaela Davies of the WeAudition.com community of talented actors and coaches.
With roles in two upcoming movies – #MyCorona, a romantic comedy directed by Phil Gorn, and Mediator, a thriller directed by Cas Sigers-Beedles – as well as a recurring co-star role on the second season of BET’s Games People Play and a spot on next season’s Tyler Perry’s House of Pain, DC is fast becoming one of the most inspiring stories of determination and perseverance in 2021.
Catch DC Glenn this Thursday for a special motivational interview, live on The State of VO. DC shares his strategies for staying relevant and fulfilled in today’s rapidly changing world, Thursday, April 29, at 7 p.m. ET on Zoom. The Zoomcast is free, but you must RSVP at www.SOVAS.org/RSVP. The event is sponsored by the Society of Voice Arts and Sciences.
DC Glenn Acting and VO Representation – The People Store Agency – (404) 874-6448
Book Tag Team Concerts – Seth Cohen of Pyramid Ent. – (212)-242-7274 Ext: 2
Source: Tag Team