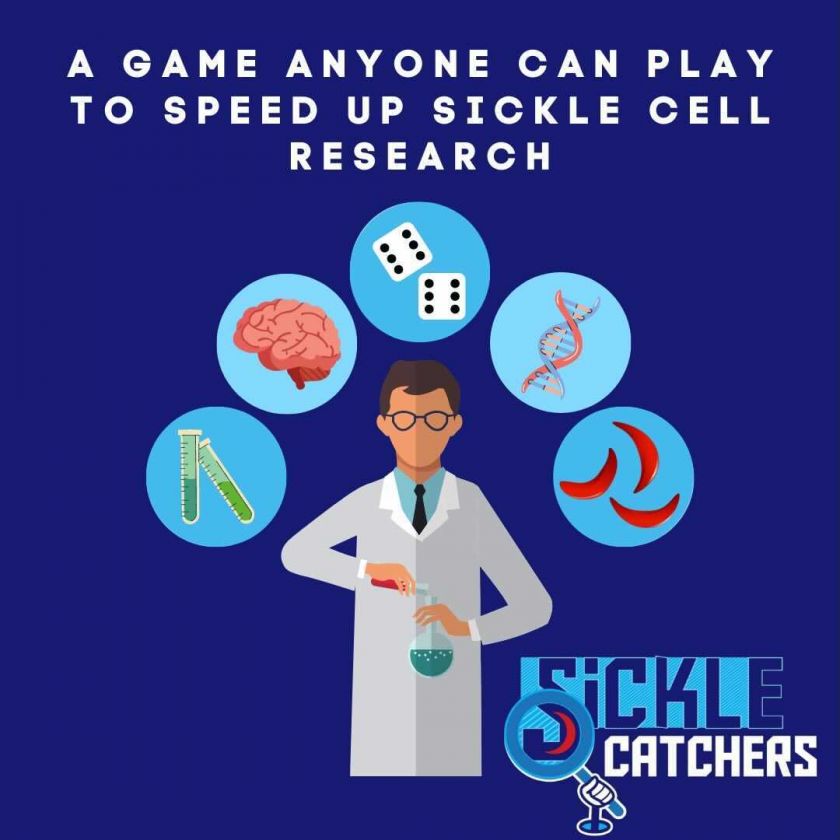 An online game under development at the Human Computation Institute (HCI) will tap the power of crowds – and their wallets – to help advance Sickle Cell Disease (SCD) research.
In this new game, called Sickle Catchers, members of the general public will score points on a leaderboard by analyzing 7Tesla MRI brain scans of sickle cell patients to help shed light on cognitive aspects of the disease being studied at the University of Pittsburgh.
Dr. Pietro Michelucci, Director of HCI, said: “Historically, we have been able to tackle health issues like Alzheimer’s and COVID19 because of financial support from mission-aligned partners, but when it comes to SCD, it’s just not on anyone’s radar.” SCD is a neglected disease that lacks research funding, so HCI is not only looking to the power of the crowd to analyze the research data, but also to fund the development of the online game itself, by launching a crowdfunding campaign.
SCD is a hereditary disease that affects 100,000 people in the U.S. and millions worldwide, mostly in sub-Saharan Africa. While SCD affects primarily black people, Cystic Fibrosis, another hereditary disease with chronic symptoms, affects mostly whites.  The key difference is that Cystic Fibrosis affects one-third as many people as SCD, yet receives ten times as much research funding. HCI aims to reduce this racial inequity by doing for SCD what they have done for Alzheimer’s disease – create an online game that anyone can play to help speed up the research.
Sickle Catchers builds on HCI’s success with Stall Catchers, an online game with over 38,000 registered players that speeds up Alzheimer’s research. Since Stall Catchers launched five years ago, volunteers have collectively analyzed over 1.4 million microscopic images, accomplishing 27 years of laboratory analysis and resulting in several top-tier journal publications.
The biomedical research that will be accelerated by Sickle Catchers is led by Professor Enrico M. Novelli in the Adult Sickle Cell Disease Program at the University of Pittsburgh Medical Center. This work focuses on understanding a possible link between brain blood vessels and SCD-related cognitive impairments, such as short-term memory loss, reduced processing speeds, and attention deficits. Neurocognitive dysfunction is emerging as a critical area of need for the aging SCD population. Cognitive dysfunction develops early and progresses through the lifetime. To date, there are no biomarkers, screening tests or early interventions for the early diagnosis and treatment of this complication.
Novelli and his colleagues have found new evidence for a neuroimaging marker of small vessel disease that could be the culprit in cognitive impairments related to SCD, but advancing this work requires painstaking manual data analysis. Sickle Catchers would make it possible to advance this research in a fraction of the time it would take in the laboratory, which could lead to treatments that help maintain brain function or perhaps even reverse any loss of function.
Sickle Catchers, like Stall Catchers, is not just a game, it is a citizen science project – an activity open to the general public that allows anyone to participate in the scientific process, not as subjects in an experiment, but as research collaborators.
To ensure high-quality research data, HCI develops specialized “wisdom of crowd” methods to combine answers from several non-expert individuals into a single expert-like answer, and then conducts a validation study to ensure that those answers agree with the biomedical experts.
September is National Sickle Cell Awareness Month in the United States.
###
About Human Computation Institute
Human Computation Institute (HCI) is dedicated to advancing the science of crowd-powered systems for the betterment of humanity. The institute developed Stall Catchers – an online game that uses the power of the crowd as a way to speed up Alzheimer’s disease research.
Project website and crowdfunding link: sicklecatchers.com
Sickle Catchers intro video: bit.ly/sicklecatchers
Multimedia gallery (CC BY-SA 4.0): bit.ly/PressBundle
Source: Human Computation Institute