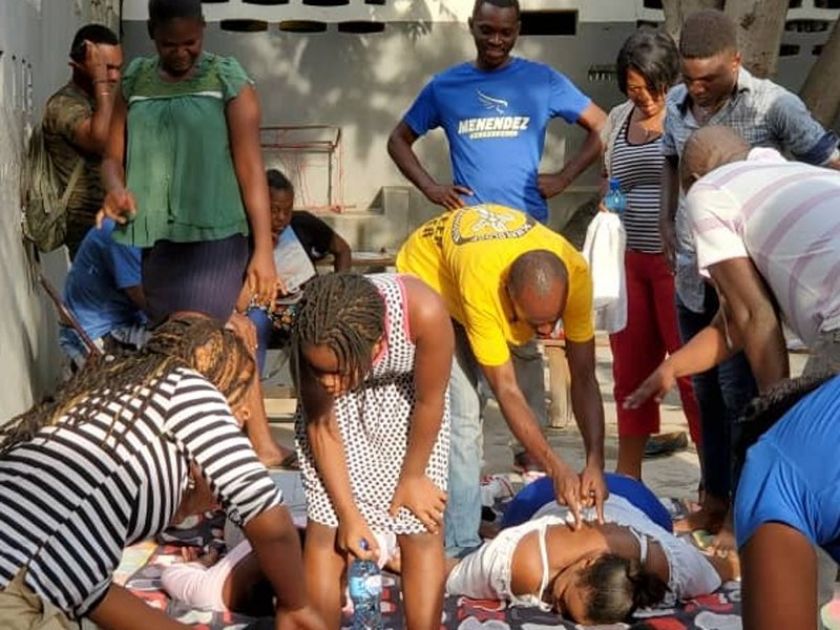 At 7.2 magnitude, the earthquake that struck Haiti on August 14 was twice as powerful as the one that hit the country in 2010. And the destruction is massive.
Scientology Volunteer Ministers in Carrefour and Les Cayes are working with nonprofits and first responders to train them on how to address the emotional and spiritual factors in the stress and trauma of those they are trying to help. They do this with seminars on Scientology assists—techniques developed for this purpose by Scientology Founder L. Ron Hubbard.
In Les Cayes, close to the epicenter of the earthquake, Scientology Volunteer Ministers provided a seminar this week to a team of first responders who knew they needed a way to address more than the physical needs of the victims they help. “The session on illnesses and injuries assist procedures will help us save more lives,” said one of the rescue group members. And the leader of the group wants to continue training his team on all 19 chapters of the Scientology Handbook, the textbook for training a Volunteer Minister.
Stevenson, who leads the team of Volunteer Ministers serving in Les Cayes, was devastated by the January 2010 earthquake. Some 300,000 were dead. “I thought my life was over,” he says. But he happened to meet two Volunteer Ministers and they invited him to a seminar, which restored his hope and revived his will to live. Active as a Scientology Volunteer Minister ever since, he shares this technology with others, confident that by getting it into broad use, “it will help save my country.”
On August 26, while visiting communities heavily affected by the 14 August quake, U.S. Agency for International Development Administrator Samantha Power, while pledging funding, also said, “Perhaps the most important lesson (from 2010) is that no development agency and no army or diplomatic corps can just import a perfect humanitarian response from afar. You need local expertise and local leadership to reach communities in need.”
It is just this kind of grassroots disaster response that Haitian Scientology Volunteer Ministers have provided for more than a decade. And it is seeing the difference the technology makes in others’ lives that inspires them to set aside their own concerns and help in the aftermath of this disaster.
In creating the program in the mid-1970s, Scientology Founder L. Ron Hubbard wrote that a Volunteer Minister “helps his fellow man on a volunteer basis by restoring truth and spiritual values to the lives of others. …A Volunteer Minister does not shut his eyes to the pain, evil and injustice of existence. Rather, he is trained to handle these things and help others achieve relief from them and new personal strength as well.”
For more information, visit the Scientology Newsroom.
CONTACT:Media RelationsChurch of Scientology International(323) 960-3500mediarelations@churchofscientology.net
Source: Church of Scientology International