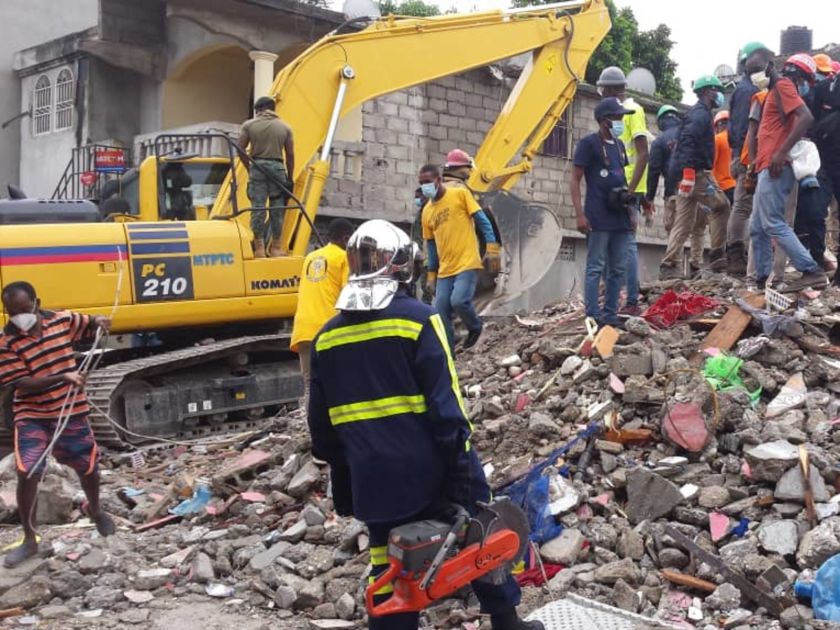 Scientology Volunteer Ministers (VMs) from across Haiti have arrived in Les Cayes after a series of disasters left the city in ruins. Days after the city was decimated by a 7.2 earthquake, Tropical Storm Grace triggered mudslides on the island, adding further challenges to relief efforts. UNICEF estimates that some 1.2 million people are affected including a half-million children.
Scientology Volunteer Ministers headquarters in Los Angeles immediately reached out to Haiti VMs to ensure they and their families were safe and to coordinate the response. The volunteers then met with the Civil Protection Coordinator and other officials and are providing relief in Les Cayes. Meanwhile, additional resources including search and rescue specialists, nurses and additional Volunteer Ministers are being readied to deploy to the region.
The VMs in Les Cayes are working with other relief organizations including the police chaplains to provide aid and help people salvage what they can from the ruins.
The Church of Scientology Volunteer Ministers program is a religious social service created in the mid-1970s by L. Ron Hubbard.
A Volunteer Minister’s mandate is to be “a person who helps his fellow man on a volunteer basis by restoring truth and spiritual values to the lives of others.” Their creed: “A Volunteer Minister does not shut his eyes to the pain, evil and injustice of existence. Rather, he is trained to handle these things and help others achieve relief from them and new personal strength as well.”
Their motto is, no matter the circumstances, “Something can be done about it.”
The Founder of the Scientology religion is L. Ron Hubbard and Mr. David Miscavige is the religion’s ecclesiastical leader.
For more information, visit the Scientology Newsroom.
Source: Church of Scientology International