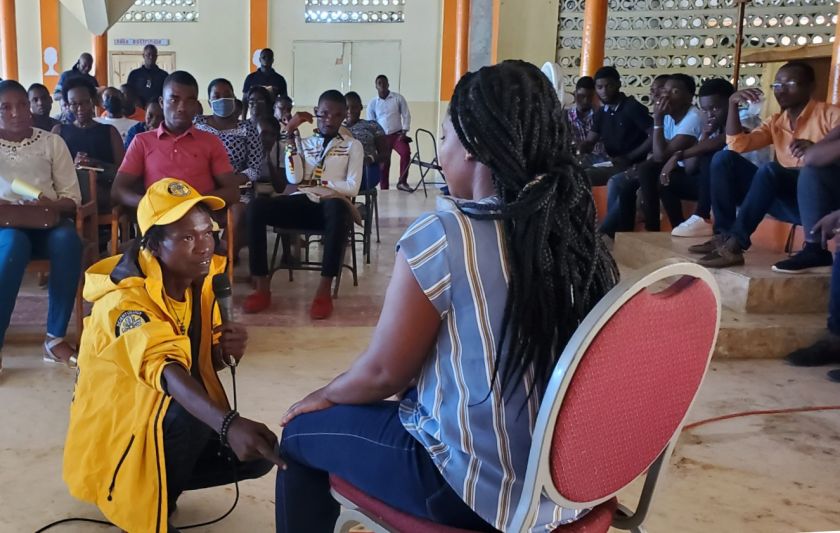 Volunteer Ministers of the Scientology Haiti Disaster Response Team completed a five-day seminar Tuesday, September 7, that trained 97 first responders and community leaders to deliver Scientology assists—techniques developed by Scientology Founder L. Ron Hubbard that address the emotional and spiritual effects of stress and trauma.
Arranged by former Jérémie mayor Yvon Janvier and cosponsored by GRADE: Groupe d’Appui au Développement et à la Démocratie (Support for Development and Democracy Group), and Fondation Communautaire Haïtienne (Haitian Community Foundation), Haitian National Police officers, the Haitian Red Cross, firefighters and community leaders also learned search and rescue and first aid skills.
Disasters are a tragic fact of life in Haiti. Two days after the 7.2 magnitude earthquake ravaged the island’s southwestern peninsula leaving thousands homeless, Tropical Storm Grace lashed the region with up to 15 inches of rain and 35-mile-per-hour winds. And the country was already reeling from the assassination of Haitian President Jovenel Moïse a month before.
Janvier told Scientology Volunteer Ministers headquarters in Los Angeles that as dire as the physical needs of his people are, he is even more concerned about their state of mind. He wanted to train a corps of first responders and local leaders in Scientology assists to bolster courage and restore optimism in his community. And the seminar did just that.
The final two days of the seminar concentrated on information contained in two Scientology Tools for Life courses: “Assists for Illnesses and Injuries,” and “Solutions for a Dangerous Environment.” Both are available free of charge on the Scientology website and the Volunteer Ministers website and some of those attending logged on to the courses through their phones to watch videos that introduce the subject and study the course materials presenting Mr. Hubbard’s technology in written form.
“I would like to thank you for this initiative,” said Belizaire, a local community leader. “I really enriched my knowledge and learned many things that will be useful to my community. I hope this will not be the last seminar for our town.”
“This has helped many people discover that life can change,” said Mariela, a member of the nonprofit Women’s Movement for the Development of Grand Anse. “And every person who discovers this technology is an opportunity for this community. May it go on and on.”
“From these days training with the Volunteer Ministers and Los Topos Azteca, I added so much to my knowledge as a police officer,” said an officer from the Haitian National Police. “I will share what I learned with my colleagues, my family and those around me. My heartfelt thanks.”
The Church of Scientology Volunteer Ministers program is a religious social service created in the mid-1970s by Scientology Founder L. Ron Hubbard. A Scientology Volunteer Ministers Disaster Response team spent many months in Haiti to help the country recover from the 2010 earthquake and to train and establish Volunteer Ministers groups throughout the island that have continued to serve their communities ever since.
A Volunteer Minister’s mandate is to be “a person who helps his fellow man on a volunteer basis by restoring truth and spiritual values to the lives of others.” Their creed: “A Volunteer Minister does not shut his eyes to the pain, evil and injustice of existence. Rather, he is trained to handle these things and help others achieve relief from them and new personal strength as well.”
Their motto is, no matter the circumstances, “Something can be done about it.”
For more information, visit the Scientology Newsroom.
Contact:
Media Relations
Church of Scientology International
(323) 960-3500
mediarelations@churchofscientology.net
Source: Church of Scientology International