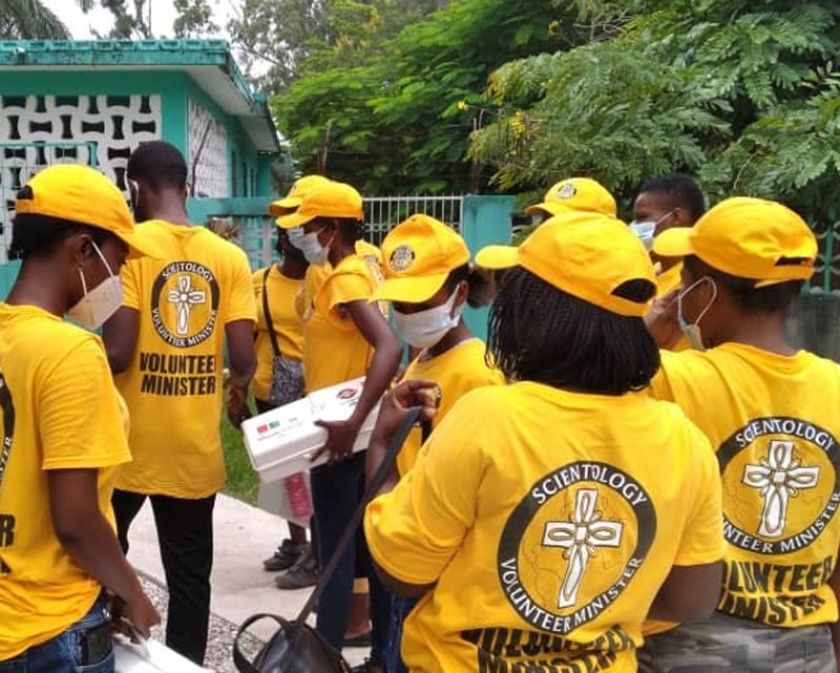 Ten nurses, wearing the bright-yellow T-shirts of the Scientology Volunteer Minister, helped set up a mobile clinic in Camp-Perrin, Haiti, and immediately started triaging and caring for patients.
Camp-Perrin is one of the communities hardest hit by the August 14 earthquake that left an estimated 12,000 injured and destroyed more than 52,000 homes. With so many in need of care and so few resources, the mobile clinic will perform a vital function.
The nurses, trained Scientology Volunteer Ministers, were part of a group of two dozen who traveled to Les Cayes last weekend to join the disaster response team.
In addition to their medical skills, they are also experienced in the administration of Scientology assists—techniques developed by Scientology Founder L. Ron Hubbard covered in the Assists for Illnesses and Injuries Course on the Volunteer Ministers and Scientology websites. By addressing the emotional and spiritual factors in stress and trauma, assists can speed healing and ease discomfort.
The Scientology Haiti Disaster Response Team is also providing Scientology assists at the OFATMA (Occupational Accidents, Illness and Maternity) Hospital in Les Cayes which, like other hospitals, is struggling to keep up with those in need of attention and care. And they are training a team of 100 rescue workers on assists and other Volunteer Ministers technology such as communication and organizational skills to help them cope with the current crisis.
In creating the program in the mid-1970s, Scientology Founder L. Ron Hubbard wrote that a Volunteer Minister “helps his fellow man on a volunteer basis by restoring truth and spiritual values to the lives of others. … A Volunteer Minister does not shut his eyes to the pain, evil and injustice of existence. Rather, he is trained to handle these things and help others achieve relief from them and new personal strength as well.”
The Founder of the Scientology religion is L. Ron Hubbard and Mr. David Miscavige is the religion’s ecclesiastical leader.
For more information, visit the Volunteer Ministers website or the Scientology Newsroom.
Source: Church of Scientology International