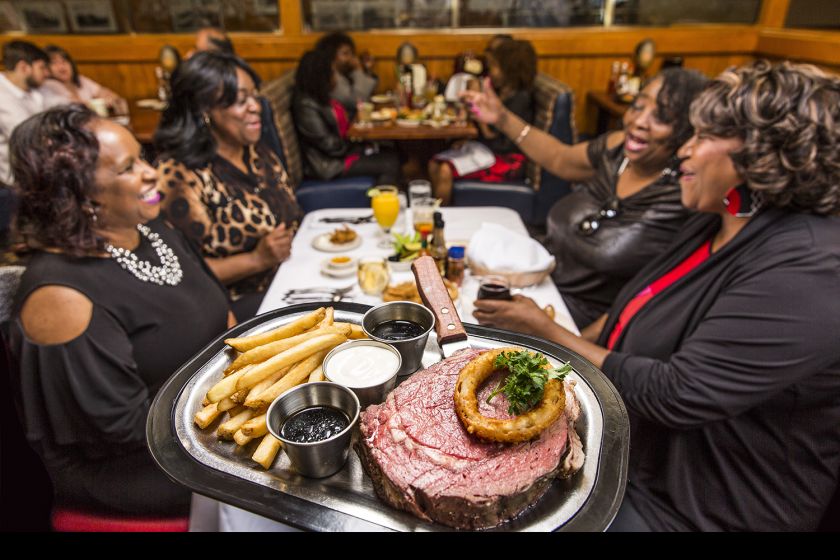 Step inside the bustling restaurant known as Sayler’s Old Country Kitchen, and you’ll experience a unique slice of Portland, Oregon. Several generations rub elbows here—from Baby Boomers to Gen-Z, and Millennials. What brings them to Sayler’s? An incredible steak dinner for less than you’d find at any upscale Steakhouse. This accounts for their long-lasting success. And it’s why they are now celebrating their 75th anniversary.
Family Operation Extends to Employees
Employees tend to stick around Sayler’s. It’s part of the charm of coming back and seeing the same server you saw on your last visit. Even in the kitchen, there is stability—an anomaly in the restaurant business. Chef Brent Dahmen has been with the operation for over 30 years. “Instead of looking for employees with a lot of experience, we look for friendly, hard-working people that will fit in well with our team,” said Bryan.
The Founding Brothers
In 1946, Art and Dick Sayler came out west and bought a small restaurant out in east Portland called the Old Country Kitchen. “Their innovation was introducing steaks by the ounce. They saw that when they offered only one size of say, an NY, some people were still hungry, and some couldn’t finish it. So they offered steaks ranging in size from a 6-ouncer to 72 ounces, to accommodate everyone. That’s when things took off,” according to Bryan.
Three Generations of Family Ownership
Art’s sons Jerry and Gene were brought into the business early on and guided the OCK through the 1970s, the ’80s, and the ’90s. Today, Gene’s sons Bryan and David manage the restaurant. Three generations of the Sayler family have always been committed to great dinners, friendly service, and affordable prices.
The Sayler’s Army
Sayler’s has a loyal following for their Steak Dinners with all the trimmings. The love for Sayler’s is evident in the engagement on social media. “When someone complains that we don’t have happy hour, or whatever, other people argue with them on our behalf,” laughs Bryan.
The New 75 oz. Steak Challenge
Sayler’s Old Country Kitchen has gained fame over the years for its 72 oz. Steak Challenge. If you can eat that steak and all the side dishes that come with it, you eat your meal for free. “We’ve had quite a few competitive eaters come through here,” said Bryan, “and not all of them make it either.” This year they are renaming their iconic challenge in honor of their 75th anniversary.
What’s Next
“Our goal is to make it to our 100th anniversary. The last 18 months have been the most challenging in our 75 year history. But we’ll get through,” said Bryan Sayler. Brother David agrees.
For more information, contact Bryan Sayler, (503) 252-4171, besayler@comcast.net, https://www.saylers.com/
Sayler’s History and Dining Photos here: https://drive.google.com/drive/folders/1HuKq_JN9Ng4NOmEFrLCS8ed-LgR-kl2o
Source: Sayler's Old Country Kitchen