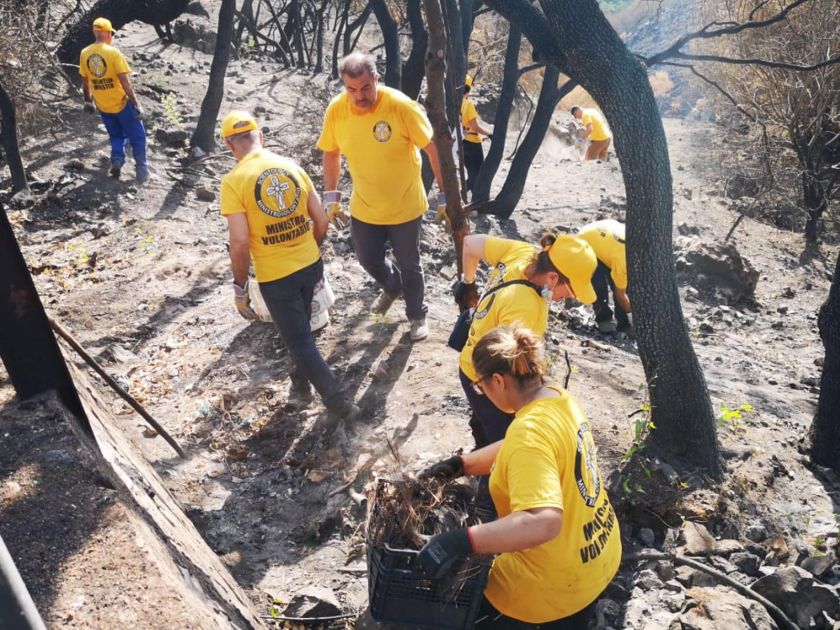 On the southeastern slope of the Montiferru Mountains in western Sardinia, once lush hillsides and farms stand as the charred remains of July’s devastating fires. Eager to move forward and breathe new life into the region, the town of Santu Lussurgiu set aside a weekend to clean up the remnants of the conflagration. So on the invitation of a town alderman, Scientology Volunteer Ministers who responded to the disaster this summer returned. They came to help with the first step of revitalizing and regenerating the region. But they were very surprised at what they saw.
Once covered by thickets and dense groundcover, the burnt-out landscape was littered with debris: thousands of glass bottles, scrap metal, household appliances—even car parts.
The Scientology Volunteer Ministers, wearing thick work gloves and their signature bright yellow T-shirts, put their backs into the cleanup.
The Scientology Volunteer Ministers from the Church of Scientology of Sardinia were struck, as they were when they came to help last July, with the energy and pride of the people of Santu Lussurgiu. And they are committed to helping with whatever it takes to restore the region.
The Church of Scientology Volunteer Ministers program is a religious social service created in the mid-1970s by Scientology Founder L. Ron Hubbard.
With the events of the 9/11 terrorist attacks in New York City, Scientology ecclesiastical leader Mr. David Miscavige called on Scientologists to redouble their efforts to aid their fellow man. He issued a directive entitled “The Wake-Up Call” which has inspired exponential growth within the Volunteer Minister program. Today, they are among the world’s most widely recognized independent relief organizations.
A Volunteer Minister’s mandate is to be “a person who helps his fellow man on a volunteer basis by restoring truth and spiritual values to the lives of others.” Their creed: “A Volunteer Minister does not shut his eyes to the pain, evil and injustice of existence. Rather, he is trained to handle these things and help others achieve relief from them and new personal strength as well.”
Their motto is, no matter the circumstances, “Something can be done about it.”
For more information, visit the Scientology Newsroom.
Source: Church of Scientology International