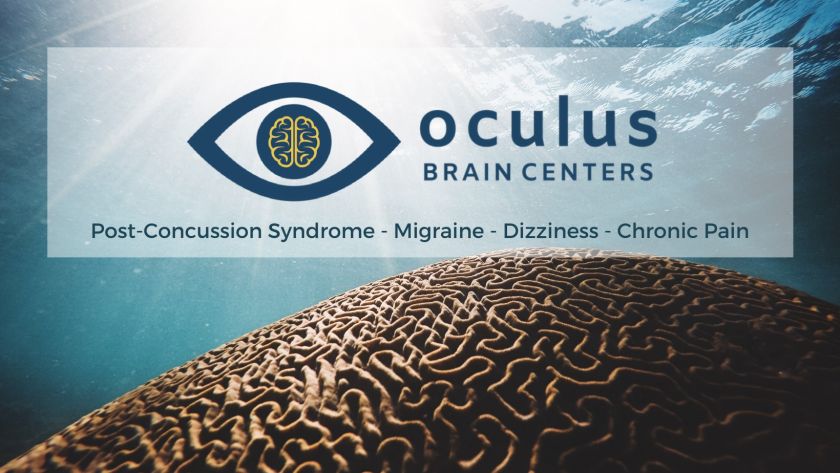 In the past two decades, the study of traumatic brain injury (TBI) and chronic traumatic encephalopathy (CTE) has become more frequently exposed through science and journalism.
These conditions were described as neurological disorders resulting from repetitive head trauma. However, we now know that’s not the case.
While CTE specifically can’t be diagnosed with an MRI (this can only be done post-mortem), the doctors at Oculus Brain Centers specialize in restoring function and healing to the injured part of the brain.
“There’s a huge stigma with any illness that you can’t see and patients suffering from post-concussion syndrome are no different,” said Benjamin Terrano, co-founder of Oculus Brain Centers. “A lot of athletes have turned to chiropractors who specialize in functional neurology for help.”
The practice of functional neurology focuses on optimal function, for what’s considered to be the gray areas of neurological problems, for conditions that include migraine, post-concussion syndrome, among others.
While Oculus Brain Centers doctors see many patients suffering from sports-related and lifestyle injuries, Terrano said that one big myth surrounding post-concussion syndrome is that it can only occur if you hit your head.
“You can also get a concussion from whiplash due to the stretching and shearing force on the brain stem,” he said.
A patient is likely suffering from post-concussion syndrome when he or she continues to experience diminished function for more than two weeks following the initial injury.
When patients arrive at Oculus Brain Centers they are often in the throes of deteriorating brain health and function, which if not addressed can have long-lasting effects.
“Your symptoms are usually a signal that the area that controls a specific task is not functioning at one hundred percent,” Terrano said. “For example, if you are sensitive to light, it is important to evaluate the areas of the brain that process light. The same thing goes for areas in the brain that control balance, eye movements, and spatial awareness.”
“A lot of people that we see come in wanting their life back,” Terrano said.
Effects of post-concussion syndrome can begin as a simple inconvenience and escalate to poor overall quality of life.
Some straight-forward symptoms can include dizziness, headache, neck and back pain as well as light and sound sensitivity.
However, others can be more obscure and include fatigue, personality changes and confusion-symptoms.
“The examination we perform is what tells us what techniques and therapies to use,” Terrano said. “The special combination we apply will be completely different from one person to the next.”
At Oculus Brain Centers, the goal is to improve function with the hopes of reducing symptoms so patients can get back to performing specific, sometimes simple tasks.
“Our priority focuses on giving power back to the patient by allowing them to direct their care. Every patient we care for is one-of-a-kind and we believe their treatment should be.”
To speak to the doctors at Oculus Brain Centers call 619-785-3688
Source: Oculus Brain Centers