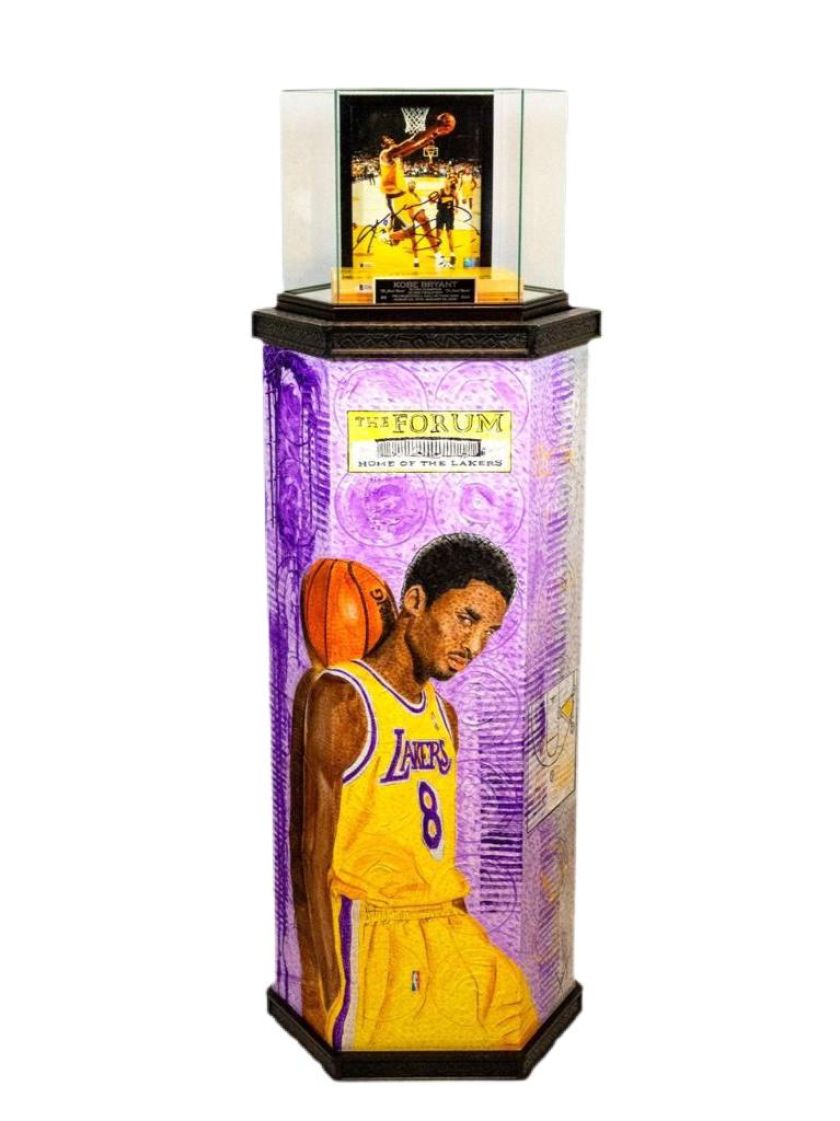 An untitled, original Lake Bates, Jr. masterpiece, a monument showcasing a licensed, autographed photo of Kobe Bryant with an actual piece of the Forum playing floor, is up for auction at the Julien’s Auctions event entitled ICONS & IDOLS SPORTS. The world-record-breaking auction house will feature the rare Los Angeles Lakers monument and its contents, estimated to sell for $3,000-$5,000. The event is scheduled for Monday, Dec. 6, and Tuesday, Dec. 7, 2021, live in Beverly Hills and online at juliensauctions.com; bidding starts at 10 a.m. (PST).
During the global pandemic, this creation became self-care for the artist who redirected his focus, instead of capitulating to anxiety. The one-of-a-kind pedestal piece to be auctioned is captured in oil, colored pencil, and oil pastel on wood, showcasing a signed 8×10 NBA-licensed photograph of legend Kobe Bryant in action at the Los Angeles Forum. The photo bears a strong signature from Kobe, autographed by the late NBA star early in his career.
The Los Angeles Lakers is one of the most successful teams in the history of the NBA with 17 NBA championship wins. The Lakers team used only one playing floor during the period of 1967-1991, the Forum. The former Lakers home played host to many significant basketball events, including the 1972 and 1983 NBA All-Star Games and the 1984 Olympic Basketball tournament. The Forum hosted NBA Finals games in an astounding 14 different seasons from 1969 to 1991, with the Lakers winning six NBA titles, clinching four of those titles on their home court.
This collector’s item includes an authentic floor piece that is part of the team’s history from the legendary Great Western Forum basketball court, utilized from 1967 through 1991. The 8×10 Forum Floorboard has also been personally autographed with hand signatures from NBA legends Magic Johnson, Kareem Abdul-Jabbar, James Worthy, Byron Scott, AC Green, Michael Cooper, and Mychal Thompson of the Los Angeles Lakers. Attendees can view the item, vividly imagine, and recount the great many basketball superstars that have set foot on this original floor piece. Sports expert Daniel Wulkan says, “When you see something that you really can’t replace, you want to purchase it.”
Lake Bates, Jr., originally from Mount Clemens, Michigan, premiered a painting entitled “Princess of Many Colors” at the Anton Art Center. He honed his skills in Pomona, California, and has since expanded his catalog to meet art lovers at various price points. SHOP for one-of-a-kind purchases, as well as modest gifts for special occasions, by visiting https://lakejr.art.
To register for this blockbuster event, visit Julien’s and download the Bidder Registration Form. Fax the completed form to Julien’s Auctions at (310) 742-0155 before Dec. 5. Bids will be accepted by phone, proxy, and in person. View online at LOT 401.
EDITORS:
For more information, visit ABOUT LAKE. For media inquiries, contact Johanna Torres via email at johannabtorres7@gmail.com or call (586) 744-8303.
VIEW
Source: Lake Jr. Masterpieces