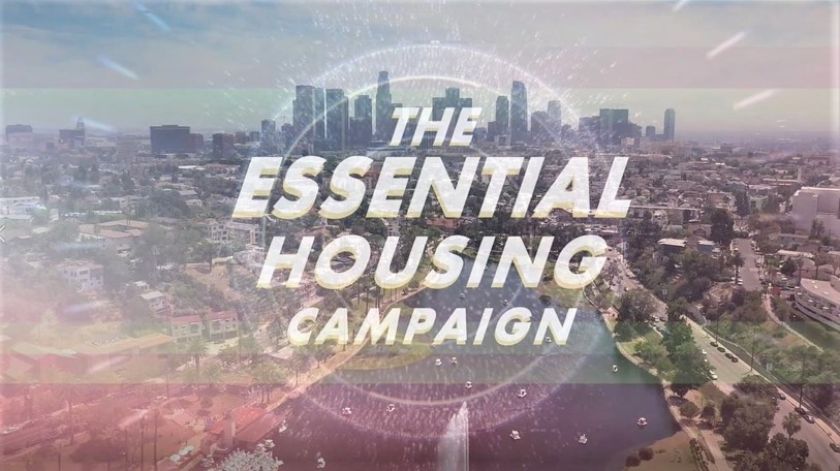 As the price of housing continues to surge in cities across the country, the middle class is being left behind, with the supply of affordable homes falling far short of current demand. In Los Angeles County, the median price of a home increased 12% annually to a record $795,000 in September – far above what an average household can afford, estimated to be approximately $300,000 based on the County’s latest estimated $73,000 median household income.
To tackle this dilemma, a new coalition of leading public and private organizations in the community and housing development industry has recently formed to launch ‘The Essential Housing Campaign’, organized by The Housing Innovation Collaborative (HICo), the Los Angeles-based nonprofit housing R&D organization, in partnership with the Southern California Association of Governments (SCAG) and the Urban Land Institute (ULI).
The goal of the new Campaign, running now through 2030, is to build 130,000 new homes throughout Los Angeles County, priced to be affordable to residents earning up to 120% of the area’s median income, using limited public subsidy.
“While there are many obstacles ahead, this essential middle-income housing can be built in the Los Angeles region using existing private market funds, existing construction methods, and existing available land – we just need the policies and incentives in place to encourage more equitable housing development,” said Charly Ligety, Director of HICo.
“The Los Angeles region is not building housing for middle-income workers anymore – many nurses, teachers, firefighters, public safety and transportation personnel, among other essential workers, cannot afford to live in the communities they serve,” said Ligety. “If left unchecked, the problem of housing affordability for middle-income workers is projected to get worse,” he continued.
This phenomenon, known as ‘the missing middle’, is present in many high-growth cities around the world where the supply of new homes has not kept up with demand and most new development is priced only for the highest end of the market.
Based on the latest projections by Los Angeles City Planning, only 1,000 new homes for middle-income workers are expected to be built by 2030, less than 0.5% of the more than 310,000 housing units expected to be built in the City. The projected number is consistent with recent development trends in Los Angeles – since 2014, only 827 units of more than 117,000 new homes built in the City were affordable to the middle-income segment.
The goal of 130,000 new homes by 2030 is based on a timeline set by California’s latest state-mandated housing production goals, which went into effect in October and runs through the end of 2029. The call to action to build an unprecedented 130,000 new middle-income homes is joined by local and regional political leaders.
“Our essential workers are the foundation that keeps our city running, and this new pledge to create affordable housing in the communities they serve will help ensure they can access prosperity,” said Los Angeles Mayor Eric Garcetti.
The Southern California Association of Governments (SCAG) – the nation’s largest metropolitan planning organization – is also helping lead the effort.
“Providing tools and developing new approaches to affordability and public-private collaboration will be vital in our efforts to build middle-income housing projects throughout the region,” said Clint Lorimore, President of SCAG.
The coalition has been working on a comprehensive action plan, and has already hosted more than 30 public presentations of solutions in the housing development space that can be deployed, ranging from proven approaches in policy, land use, finance, design, construction, along with various operational and process reforms to help accelerate and drive down the cost of housing development.
For more information about The Essential Housing Campaign, visit housinginnovation.co/essential. The Housing Innovation Collaborative (“HICo”) is a solution-oriented, non-profit housing R&D organization based in Los Angeles, CA, focused on accelerating the next generation of design, finance and policy to address the housing crisis, more at housinginnovation.co.
Press Contact: Charly Ligety, charly@housinginnovation.co.
Source: The Housing Innovation Collaborative