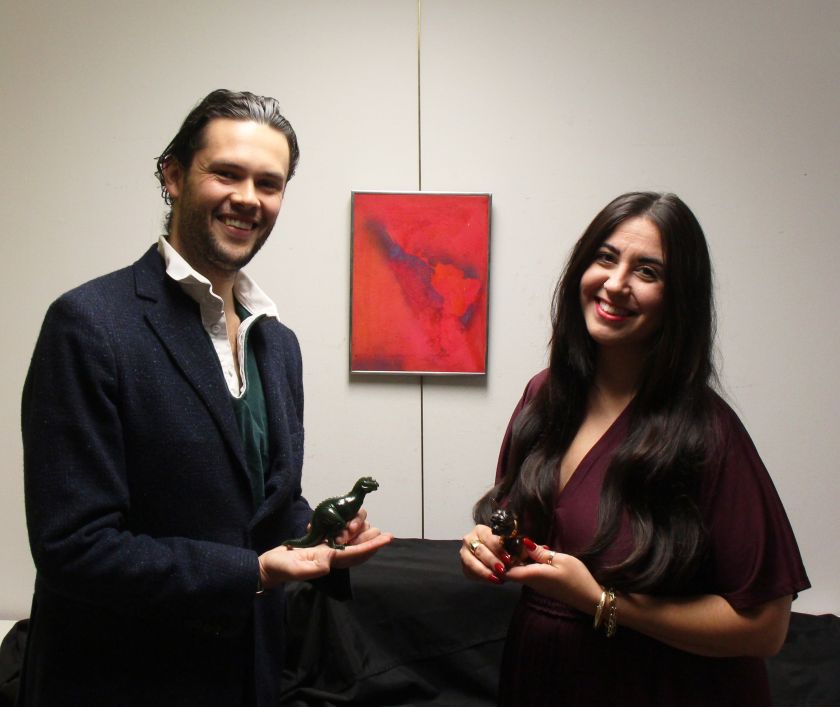 Clarke Auction Gallery in Larchmont, NY, is pleased to be offering an extremely rare, early 20th century, carved Fabergé nephrite jade Tyrannosaurus Rex with rose cut diamond eyes in its upcoming Nov. 7, 2021, sale. The carving was attributed by Geoffrey Munn OBE, MVO, a London-based Fabergé expert and the author of Wartski: The First 150 Years, which features two illustrations of the carving (pp 54-55). Munn spotted the then-unattributed work in a Clarke Auction Gallery advertisement and graciously notified Clarke Auction.
Fabergé carvings of prehistoric creatures are exceedingly scarce and valuable, with only two or three known examples, making the upcoming sale of this T-Rex at Clarke a truly noteworthy event. This work is thought to have been created around 1910, inspired by the first discoveries of T-Rex skeletons a few years earlier. Because of this dinosaur’s sale history, there is strong reason to suspect it was once owned by Tsar Nicholas II.
A Frank Bowling map painting from 1972 and a possibly-Fabergé carved French Bulldog with diamond eyes and gold collar are also highlights of Clarke Auction’s November 7 sale, which features roughly 650 lots of fine art, antiques, decorative art, design, Asian art, jewelry, and silver.
Those interested can view the lot at www.clarkeny.com and during the gallery’s preview hours, Nov. 4-6, 12-6 p.m., at 2372 Boston Post Road, Larchmont, NY. Please direct all queries to Whitney Bria (whitney@clarkeny.com) / (914) 833-8336.
Source: Clarke Auction Gallery