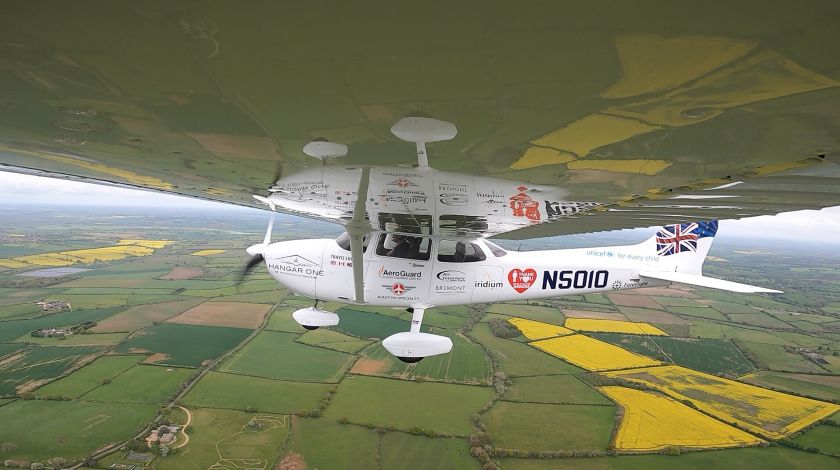 An attempt at the world record for youngest around the world solo is currently underway, and will be landing to visit AeroGuard Flight Training Center in Murrieta, CA at French Valley Airport around June 14, 2021. Young Travis Ludlow, from the U.K., aged just 18 Years and 121 Days, is attempting to break the current world record by 30 days having left from London 16 days ago.
Ludlow, who is now halfway through his world record attempt, will be visiting Murrieta, California while on his route, stopping at AeroGuard FTC at French Valley Airport. Ludlow did part of his training for the world record attempt while on school break at AeroGuard’s Phoenix, Arizona campus in February 2020 to prepare for the world record attempt, and is landing in Murrieta to meet with other AeroGuard students. Ludlow completed his Instrument Rating training with AeroGuard, allowing him to fly during the world record attempt in cloudy conditions, and at night, when pilot visibility is impaired.
From California, Ludlow will continue to head east across the U.S., including visiting other AeroGuard campuses in Arizona, Texas and Florida, before going back over the Atlantic Ocean to complete his mission where it all started. Already on this trip, Ludlow has traveled from the UK through Europe, across Russia, into Alaska, and then down into the mainland United States. The world trip is expected to take a total of 45 days and fly over 24,900 miles to meet the requirements for the Around the World attempt.
Ludlow has been not only preparing for this trip for over three years, but even before that having started flying gliders at just 12 years old to become the youngest glider pilot in the UK, flying solo on his 14th birthday and receiving his private pilot license at just 16 years old. “Flying has been a passion of mine ever since I can remember and flying around the world solo has been my dream for years. I’m so excited to now be on the adventure I have dreamed of my whole life,” Ludlow said.
Ludlow had originally planned to make this world record attempt in the summer of 2020, at the age of just 17, but his plans had to be postponed due to the COVID-19 pandemic. 12 months removed, Ludlow feels like it is now or never and is still able to break the record – although not as early as hoped – while maintaining safety, social distancing and other precautions traveling across the world.
Ludlow chose to do a portion of his flight training with AeroGuard Flight Training Center, which trains pilots for careers as professional airline pilots, given his short timeframe to beat the world record. Pilot training is an in-demand career with projected pilot shortages in the decades to come given an aging workforce and FAA mandated retirements.
Press inquires please contact info@flyaeroguard.com or travis@aroundtheworldsolo.co.uk.
Source: AeroGuard Flight Training Center