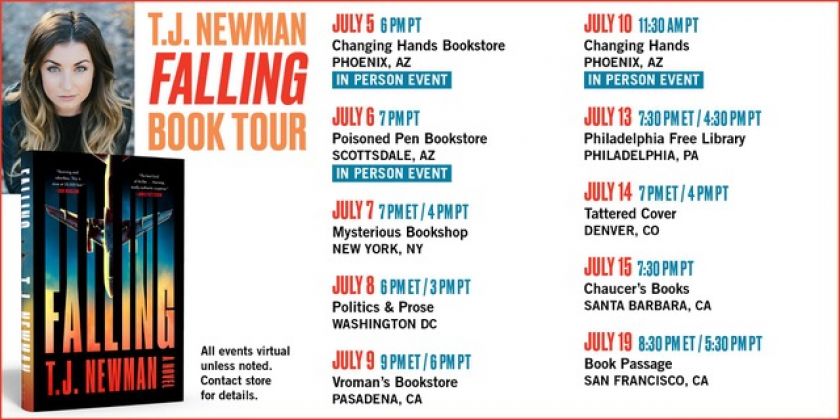 Author T.J. Newman, born, raised and a current resident of Phoenix, will be launching her nationwide tour for one of the most anticipated books of the summer, FALLING, from the very same Phoenix bookstore where she once worked as a bookseller. It’s an incredible Cinderella story and a great local success story; already a best-seller in the UK and the subject of dozens of major media pieces, FALLING goes on sale Tuesday, July 6 from Simon & Schuster.
Newman will be at Changing Hands Bookstore on July 5 and 10 and at The Poisoned Pen in Scottsdale on July 6 to sign her book and meet fans. In addition to her seven-figure publishing deal, Universal has acquired the movie rights to the book for $1.5 million following a bidding war that was on the front page of the Hollywood Reporter. An absolute dream come true for a first-time author.
Newman’s personal story is nothing short of incredible. She was a flight attendant for ten years with Virgin and Alaska Airlines and came up with the idea for the book during a cross-country flight while the passengers were sleeping. When she realized that everyone’s life was in the hands of the pilot, she considered the question “What if the pilot’s family was kidnapped and the only way to save them was by crashing the plane?” She began writing FALLING 35,000 feet in the air on cocktail napkins while working her red-eye shifts as her passengers slept.
The first draft of her novel was written while still working as a flight attendant and was rejected by forty-one literary agents before being taken on by Shane Salerno at The Story Factory, who brokered three separate seven-figure deals for the book. Despite 41 rejections, Newman refused to quit. She kept fighting for her book believing that she “didn’t come this far just to come this far.” She empowered herself and changed her life completely.
FALLING is one of the most anticipated books of the year, being highlighted in must-reads hottest summer books by top publications including Esquire, LA Times, Entertainment Weekly, New York Post, Good Reads, Town & Country, Newsweek, and USA Today. Veteran authors sing its praises with Don Winslow calling it “Jaws at 35,000 feet,” Gone Girl author Gillian Flinn called Falling “A Perfect Thriller” and James Patterson describing it as “Non-Stop Totally Authentic Suspense.”
About FALLING
You just boarded a flight to New York. There are one hundred and forty-three other passengers onboard. What you don’t know is that thirty minutes before takeoff, your pilot’s family was kidnapped. For his family to live, everyone on your plane must die. The only way the family will survive is if the pilot follows his orders and crashes the plane. Enjoy your flight.
Media Contact
Maria Herrera
Maria@narrative-pr.com
# # #
Source: T.J. Newman