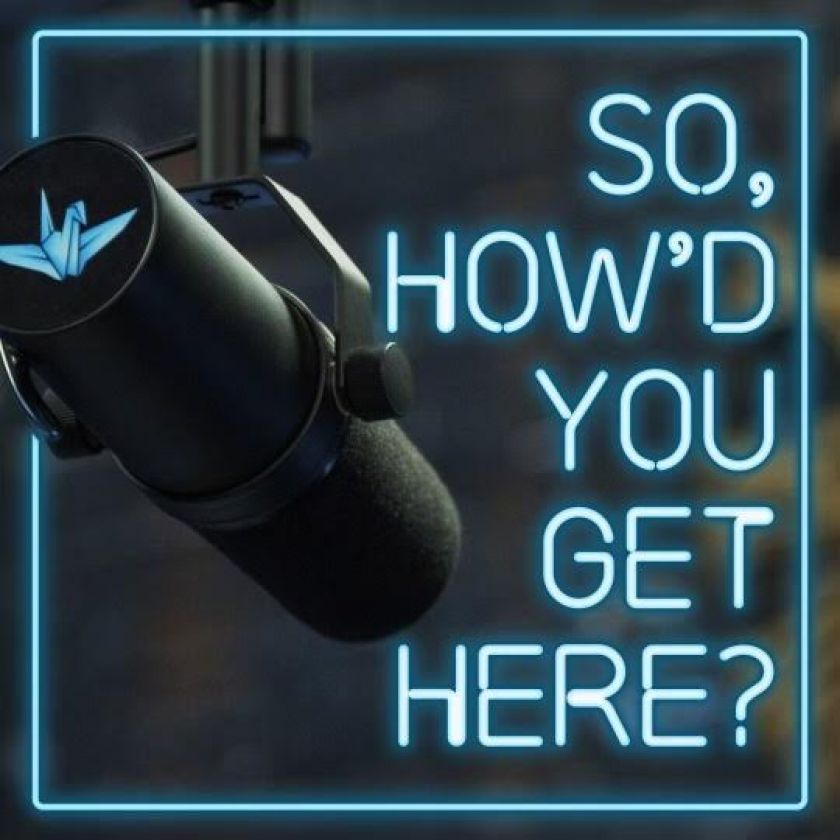 Today, Paper Crane Productions announced the launch of the “So, How’d You Get Here?” podcast with hosts Tony DeFrancesco and Angelo Restaino. The podcast launched with their first guest, actor/comedian Dana Carvey, and focuses on the come-up stories of industry talent, executives, and leaders.
The team behind the podcast includes DeFrancesco and Restaino, on-air talent and producers; Ryan Cheevers, producer and digital developer; Robin Pabello, cinematographer; and Samuel Lin, colorist.
“So, How’d You Get Here?” features A-list guests and other industry professionals, who hustled their way to becoming experts within the entertainment business: both in front and behind the camera. Set in one of the most unique studios in L.A., DeFrancesco and Restaino spend most of the hour-plus show building conversations around one simple question, “so, how did you get here?” The rest of the time is left for hilarious, over-the-top, and often touching and inspiring stories.
“We wanted to create a show that was both entertaining and intimate. Dialoguing with guests about the storms they’ve weathered requires a deliberately slower pace. Our first guest, Dana Carvey, told us he wasn’t really sure he was going to make it. It took more than a decade of struggle and rejection before he finally broke through, and that’s what we’re here to talk about,” said Restaino, On-Air Talent/Producer.
The lineup includes:
Episodes drop every Thursday at 5:30 p.m. PST.
To listen, visit www.papercranefilms.com/podcast.
Also available on iTunes, Spotify, and Youtube.
ABOUT PAPER CRANE PRODUCTIONS:Paper Crane Productions is a privately financed, LA-based, film, television, and web series company made up of three creative partners – Ryan Cheevers, Tony DeFrancesco, Angelo Restaino – with unique life experiences and a commitment to quality storytelling. Collaboration is the cornerstone of Paper Crane’s development and production process. Visit them at www.papercranefilms.com.
ABOUT ANGELO RESTAINOBorn in a quiet Washington town, Angelo discovered his love for movies at a very young age. In the fall of ’04, he landed an internship in the feature production office at 20th Century Fox and discovered a tight-knit group of filmmakers, who were young, talented, and just as broke as everybody else. Yet it was through these intimate relationships that he found success. As he continues to create the future, Angelo hopes that the Paper Crane team strives to produce stories that are not only entertaining and compelling but also significant.
ABOUT TONY DEFRANCESCORaised in a small Connecticut town just outside of New Haven. Tony’s dream was to make a living in front of the camera, however, through his experience and a well-rounded arsenal of skills have made him a prolific, up-and-coming producer behind the camera. His unique ability to cultivate and keep relationships with every person he comes in contact with has created opportunities that steer this company into an unpredictable and exciting future.
MEDIA CONTACT: Jennifer BuonantonyJennifer@PressPassLA.com 323.496.1976
Source: Paper Crane Productions