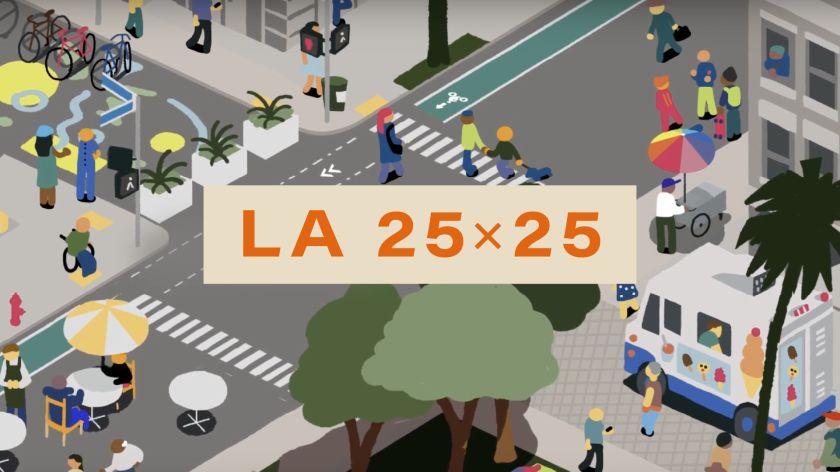 Spearheaded by Streets For All, LA 25×25 is a challenge for those running in the city of Los Angeles for mayor, controller, city attorney, and city council: commit to repurposing 25% of street space by 2025.
“Los Angeles has been stuck in the 1980s in the way we think about our public space,” said Michael Schneider, Founder, Streets For All. “25×25 is a chance to fix that and will transform the city into a place where you can visit a park or plaza in under a 10-minute walk, where buses are dramatically faster than cars and you don’t have to risk your life to ride a bike, where Slow Streets and Al Fresco are massively expanded, and where we live in a quieter, safer, more vibrant, and more sustainable city.”
LA 25×25 details the harm that our addiction to car space has on our city, from one of the highest rates of childhood asthma in the county to a pedestrian being killed every three days, and details solutions that return streets to people.
According to the campaign, for decades, the people of Los Angeles have been forced to accept a “normal” on our streets that is anything but. It is not normal:
“25×25 will make Los Angeles a more affordable, safer, cleaner, greener, and more economically productive city, that’s why I was proud to be the first Mayoral Candidate to sign on.” – Jessica Lall, candidate for Mayor of Los Angeles
LA 25×25 calls for the addition of:
– 1,550 miles of Slow Streets- 60,000 safer crossings at intersections- 615 miles of dedicated bus lanes- 30.5 million square feet of public plazas and open space- 26.1 million square feet of wider sidewalks- 600 miles of protected bike lanes- 200,000 trees- 6,000 bus shelters- 2,500 public restrooms- 10,000 benches- 20,000 trash cans- 7,500 Al Fresco outdoor dining implementations- 10,000 loading zones
“LA 25×25 envisions a city where the bus is never stuck in traffic and never far away. Where bike share, bike parking, and protected bike lanes are easily accessible to all, so safe that even children could bike themselves to school. Where green space dots every corner of the city. Where those who choose to drive are not stuck in traffic.” – Bryn Lindblad, Climate Resolve
As of November 1, the following candidates have signed on:
Mayor: Jessica LallController: David Vahedi, Kenneth MejiaAttorney: Kevin James, Marina TorresCD1: Eunisses HernandezCD3: Yasmine PomeroyCD5: Molly Basler, Jimmy Biblarz, Sam Yebri, Scott Epstein, Katy YaroslavskyCD9: Curren Price, Dulce VasquezCD13: Al Corado, Dylan Kendall, Hugo Soto-Martinez, Kate PynoosCD15: Bryant Odega
Candidates wishing to sign on can go to https://la25x25.com.
LA 25×25’s coalition includes Streets For All, Climate Resolve, Streets Are For Everyone, ActiveSGV, MoveLA, Abundant Housing LA, Central City Association of Los Angeles, Los Angeles Neighborhood Land Trust, Institute for Transportation and Development Policy, and Day One.
This initiative is led by Streets For All and based on a concept created by Transportation Alternatives and WXY in New York City, where the proposal has won widespread support, including by Mayor-to-be Eric Adams.
View the website. Watch our launch video.Check out the full list of endorsements.
Contact: Josh Vredevoogd Cell: 206-351-9114josh@streetsforall.org
Source: Streets For All