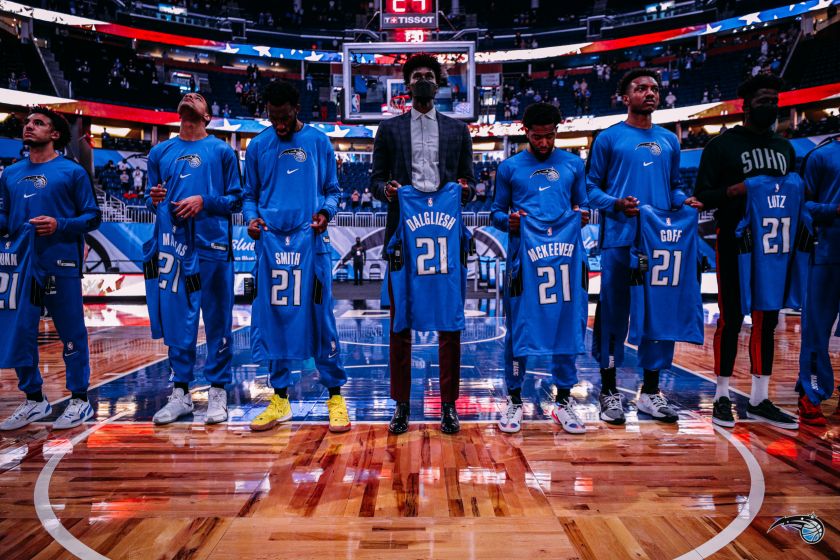 Each Orlando Magic player during the national anthem prior to Sunday’s game against the Houston Rockets held up a jersey that had a name of a fallen U.S. soldier listed on the back. Point guard Chasson Randle’s jersey had McKeever on the one in his hands.
That was in honor of David McKeever, a U.S. Army specialist who died in combat in 2004 in Iraq. Niki McKeever, his wife, and son, Dylan, now 18 who was just a year old at the time of his father’s death, were at the game to receive that jersey and take part in the Magic and L3Harris’  17th annual Seats for Soldiers Night.
They were among the many families in attendance who have lost someone in the line of duty or from post-combat suicide. Also there was Jose Belen, a U.S. Army combat veteran himself who founded Mission Zero, a Florida-based organization aimed at ending the PTSD and veteran suicide epidemic.
Like David McKeever, Belen was in Iraq during the war. He did three years of active duty service and was in combat most of that time. Understanding what other veterans and their families are going through, he felt it in his heart to create what he describes as a “veteran ecosystem” that targets education and advocacy campaigns, spearheads suicide prevention efforts, organizes family support initiatives, helps business owners expand their veterans outreach and hiring programs, and runs veteran coaching programs.
“Mission Zero stands as an organization to bring the unity back in the community,” Belen said. “What I learned in the war is that the team element wins battles. That there is no glory in doing it alone. That if we accomplish our goal, we should accomplish it in unison.”
Every 65 to 72 minutes in the U.S., research shows, a military veteran commits suicide. Belen, who went through his own personal struggles following returning from war, believes people and resources together can help our country’s heroes recover from their invisible wounds.
“The Orlando Magic has shown that by taking my call two years ago, saying ‘hey listen, I’m new at this, I’m fighting for a cause. If you put your heart first, we can do something beautiful,'” he recalls. “It’s been two years going, but it’s my firm belief that the most important thing that we can do as human beings, knowing when people are struggling, that if we are in positions to help or to make someone else’s dreams come true before our own, so be it because the spirit of an American, and I learned this in war, is that you put your neighbor before you if you need help.”
Trish Wingerson, Orlando Magic, twingerson@orlandomagic.com
Source: Orlando Magic