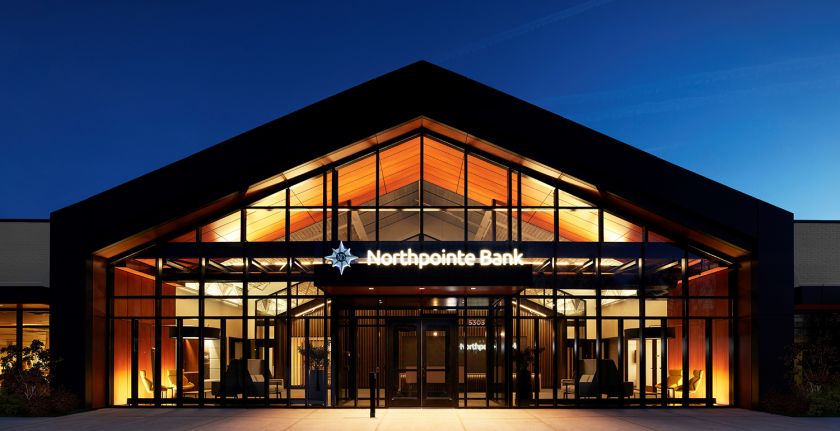 Northpointe Bank (Northpointe), a nationwide leader in offering innovative and high-value banking products, and Ghafari Associates (Ghafari), a global architecture and engineering firm, are proud to announce the opening of the innovative Northpointe Bank Operations Center. This modern facility is the national operations hub for Northpointe’s growing residential lending and customer service groups and is the perfect place to accommodate many of the 261 new jobs Northpointe has added in the past 12 months.
“At Northpointe, people are the center of everything we do – and our workspace is a direct reflection of the trusted life-long relationships we build with our customers, employees and communities,” said Northpointe’s President and CEO Chuck Williams. “Ghafari gave us tremendous insight and drive into designing a productive environment. Beyond just brick and mortar, Ghafari delivered a smart office layout that is flexible, collaborative and a place where people want to work.”
Prior to putting pen to paper, Ghafari developed a strategic roadmap as a deep understanding of Northpointe’s key business drivers that have a direct impact on the functionality of a workplace and the effectiveness of the people working within. According to Michael Lubbers, AIA, Director of Design at Ghafari, “the design transcends the functional parameters of program and budget, much like how Northpointe transcends typical banking. Northpointe gets that people want to be part of something that is genuine, exhibits trust, provides freedom, and promotes well-being. In the end, we created an environment that offers serious focus – while also offering choices and fun, reflective of users’ daily lives and surroundings.”
“Given the circumstances of 2020, naturally we had to re-think how this project fits our strategic business plans,” added Ashley Moser, Vice President of Administration for Northpointe. “However, we immediately confirmed that our early designs of a full functioning, collaborative workspace is very important now and in our future. Northpointe doesn’t do anything halfway – we hold to being the best at everything we do, and the Operations Center is example of just that.”
Photograph images are available here.
About Northpointe BankNorthpointe Bank works to be a different kind of bank, putting “you” at the center of everything they do. For each of the past six years, Independent Community Bankers of America® has ranked Northpointe Bank as a top-performing bank in the nation out of approximately 5,000 ICBA member banks*. To learn more about Northpointe, visit www.northpointe.com
About Ghafari AssociatesGhafari Associates is a leading global architecture, interior design, engineering, process design, and consulting firm that has been a partner, innovator, and advocate for its clients since 1982. To learn more, visit www.ghafari.com
Media contacts
Kendra Achenbach-WarnerMarketing Coordinator, Ghafarikachenbach@ghafari.com616-771-0909
Ashley MoserVice President of Administration, Northpointe BankAshley.Moser@northpointe.com616-974-8427
* – Source: Best Performing Community Banks; Independent Community Bankers of America ranked Northpointe Bank as best performing bank according to return-on-equity for banks with assets over $1 billion
Source: Northpointe Bank