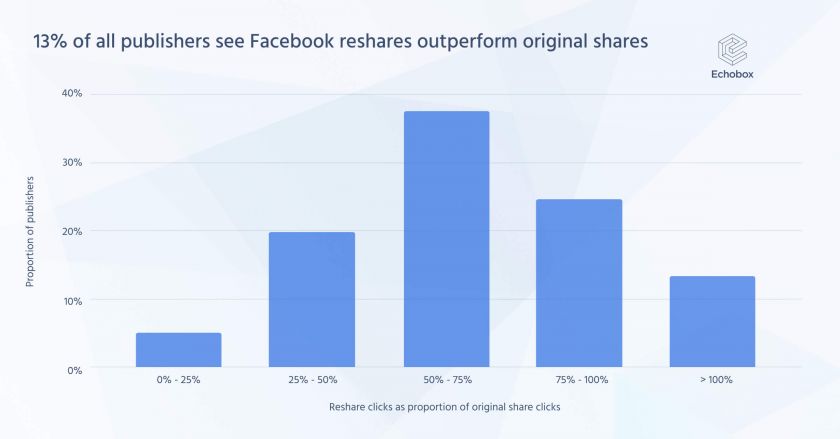 Publishers who reshare their existing content on Facebook achieve 67% additional clicks on average, reveals new research published today by Echobox, the AI-powered social publishing platform.
The groundbreaking research found that the large majority of publishers currently only reshare small amounts of content on Facebook and stand to obtain substantial boosts in traffic by simply resharing more of their existing content.
Believed to be the first of its kind of this scale and specific to publishers, the study examined data from more than 600 leading publishers from around the world.
Over 1.85 million Facebook shares and 2.8 billion Facebook clicks were measured to understand how publishers are resharing their posts and determine the impact on Facebook clicks.
Antoine Amann, CEO of Echobox, said: “Resharing on Facebook remains massively under-utilized, yet it presents a unique opportunity for publishers to dramatically boost their social traffic – without cost.”
Key findings include:
Detailed results can be found in a free downloadable guide entitled The publisher’s ultimate guide to resharing on Facebook, which also includes an actionable blueprint for publishers to implement an effective Facebook resharing strategy.
Publishers can also use the free Facebook Grader to instantly analyze their Facebook Page health and detect new opportunities for resharing more Facebook content.
For all media inquiries, please contact press@echobox.com
About Echobox
Echobox is the new standard in social media publishing, chosen by more than 1,000 of the world’s leading publishers, including Newsweek, The Times, The Telegraph, Handelsblatt, Le Monde and Conde Nast. Publishers share more than 20 million posts and reach billions of people with Echobox each year. Echobox’s research and insights have been written about by many of the world’s leading publications including the BBC, CNN, Bloomberg, Techcrunch and Forbes. Read more at www.echobox.com/resources.
Source: Echobox