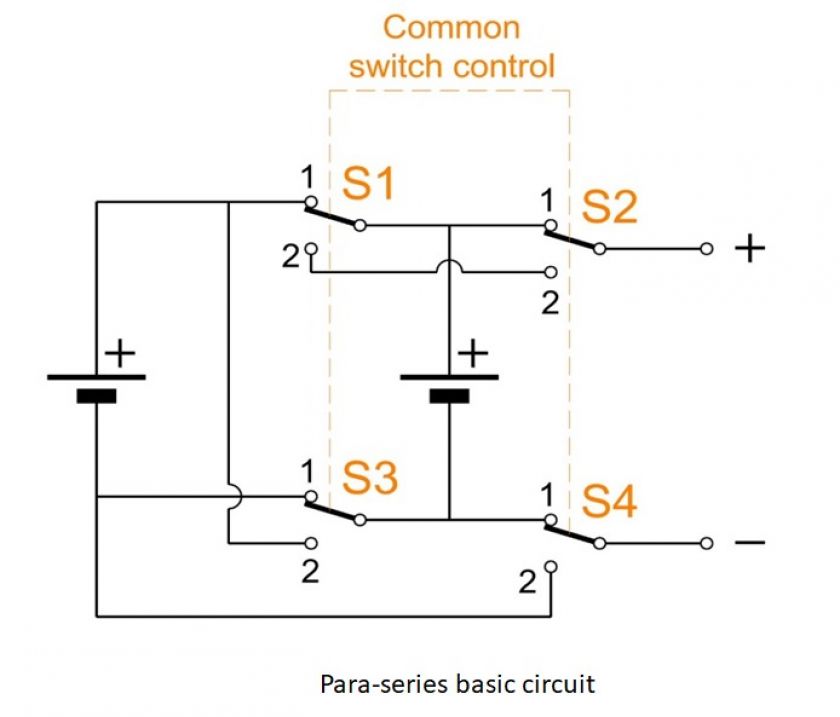 Switching Battery Inc. has unveiled an innovative electronic method for the connection of batteries called “para-series”.
The patent-pending para-series method is based on dynamically switching a group of batteries between series and parallel connections. As these two connection schemes have complementary properties, the para-series method can yield the optimal result for the output voltage. When two 3.7V batteries are connected in para-series, the voltage of 5.55V is the average voltage between parallel and series connections when at 50-50 parallel-series duty cycle.
“By simply adjusting the duty cycle between the parallel and series circuits, it is now possible to have 100% parallel or 100% series circuits as well as any combination in-between, to produce precise voltage required by the load or device,” says Singapore-born inventor Kannappan Chettiar.
The most important characteristics of the para-series is that the output voltage can be continuously changed in a wide range by simply adjusting the duty cycle of the switching signal. Further as a single switching frequency is used that can be as low as the usual 50/60Hz line frequency. This strongly reduces the electromagnetic interferences (EMI) and the need to comply with EMI regulations.
The State of Charge of the system batteries is automatically rebalanced and the remaining charge redistributed among the batteries. A weak battery is constantly recharged by the other ones, thus avoiding a general failure due to a single battery. This rebalancing acts from the very start before any charge unbalance can develop and put the system at risk. Batteries of different sizes can also be employed in the same system, giving great flexibility in the battery pack design.
To show an example of the effect with batteries of different capacities, suppose we have two batteries, one of 1 Ah capacity and the other of 2 Ah, connected in series. When the first battery has delivered 90% of its charge (i.e. 0. 9 Ah) its voltage drops to a very low value and the series is no longer usable. The second battery, having had the same current (series connection), also delivered 0.9 Ah. The system, therefore, becomes unusable when it has delivered 2 x 0.9 Ah = 1.8 Ah, or only 60% of the total of 3 Ah of the two batteries. 40% of the energy is now unusable.
In the para-series method, the battery with 2Ah capacity battery recharges the other one in the parallel phase; therefore the system will be discharged when both batteries have supplied 90% of their charge; only 10% will be unusable. This 30% savings potential is very important because it always allows maximum efficiency in the use of batteries that have different capacities, a different state of charge, and also that over time have developed different characteristics.
Switching Battery Inc. (www.switchingbattery.com) is a tech startup founded by Chettiar.
Press contact: kc@switchingbattery.com
Source: Switching Battery Inc.