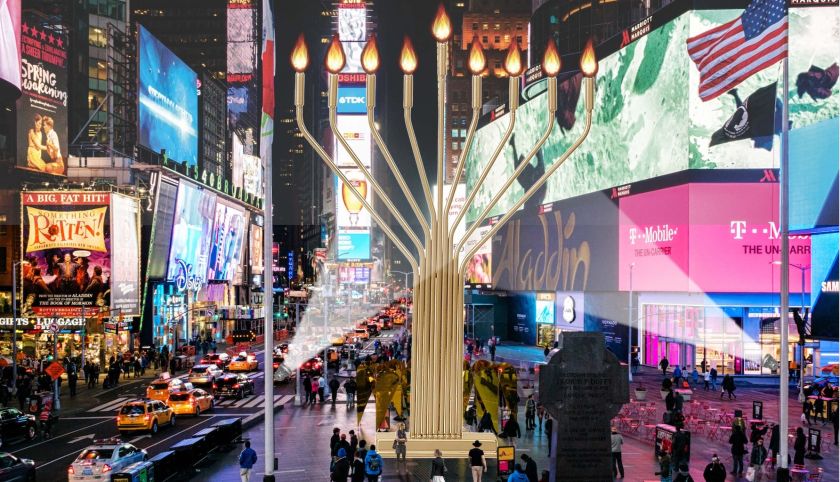 The Times Square Menorah Project (FestivalofLightsNY.com) announces plans create the world’s largest menorah reaching 52′ into the sky as preproduction begins on a celebrity filled TV special to light the giant menorah on Dec 18, 2022.
Celebrating the Jewish Festival of Lights with the same prominent level of media support and enthusiasm as Christmas tree lighting ceremonies is long overdue. Many of the most loved Christmas songs were written by Jewish composers including “White Christmas”, “Rudolph the Red-Nosed Reindeer”, and “Let it Snow”. The New York based group recognize the beauty of Christmas tree lighting ceremonies. Now they want to create something for Hanukkah that reaches the same level of positive media visibility.
500,000 people visit the Rockefeller Tree every day. NYC should have a menorah of equal prominence. The proposed Times Square Menorah is a good way to accomplish that goal. The team behind this ambitious project includes music, TV, and live event producers with decades of experience creating shows that range from working alongside Dick Clark on New Year’s Eve to large concerts on the streets of NYC and even a stint on the road with Guns and Roses (Slash is Jewish). The Chanukah Song by Adam Sandler brought the holiday into the mainstream for millions. When Dave Dave Grohl released the ‘Hanukkah Sessions’ with songs by Drake, Beastie Boys and other Jewish Stars earlier this month; they knew the time was right to begin work for 2022.
Hanukkah comes at the end of the year when the light of the day is cut short by long winter nights. The Jewish Festival of Lights drives away the darkness with a flame that miraculously shines bright for eight glorious nights. The struggle against darkness and the need for a miracle is as timeless as the Jewish faith itself.
The laws of Hanukkah state it is best to light the menorah in the presence of many people to celebrate the miracle. That makes Times Square the perfect location. Jewish law writes that the menorah should be no higher than 20 amot from the ground (approximately 32 feet). One proposal for the Times Square Menorah will be designed at 32′ tall and stand on a 20′ pedestal topped with ground soil from Israel. Rabbinical consultation will determine the final design.
Scholars have written about menorah displays in cities for almost as long as high rises have existed. An earthen-covered pedestal 20′ tall allows a new opportunity to celebrate Hanukkah in a way that brings the Festival of Lights to more people in an exciting way while following Jewish law. They believe people will travel from around the world to see it in person and to celebrate. New York City officials have been extremely receptive to the project.
Funding for engineering and architectural design drawings will be aided by a Kickstarter campaign. Limited edition signed & numbered design drawings, prints, architectural sketches, artistic renderings, and NFTs will be made available with a goal of $12,500. Info at FestivalofLightsNY.com
Media Contact: Mike Nazzaro (914) 533-4555 or info@TimesSquareMenorah.com
Source: Times Square Menorah Project