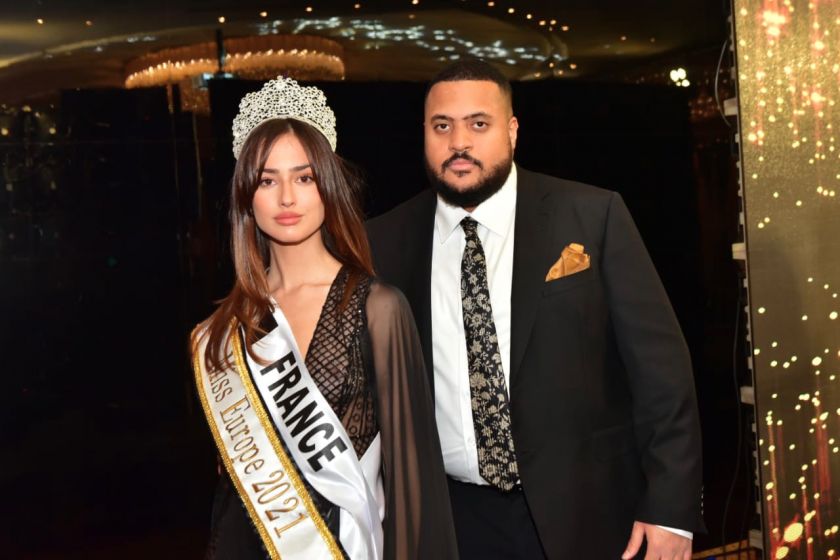 Miss France Lou-Ann Vecchia was crowned Miss Europe 2021 after the pageant was post-posted due to the global pandemic.
Miss Europe and the runners-up were gifted cash and bonus prizes thanks to the primary sponsor of the event, Yassin K. Fawaz. Along with the title and cash earnings, Vecchia has access to a year’s worth of contracts through Fawaz’s network of modeling agencies and PR around the world. She will be making special guest appearances at events in the world’s most fashionable cities such as Milan, Paris, London, Berlin, and New York. Her new role will empower her to inspire pageant hopefuls to believe in themselves and succeed.
This prestigious event was sponsored by international businessman and socialite Yassin K. Fawaz, better known as his popular Instagram moniker “King Rolodex,” topping over one million followers. Yassin’s alter ego lives in endless luxury and lavishness. The nickname came from business associates who were impressed by the extensive and prominent connections at Yassin’s disposal. Yassin’s global business interest has provided him unique access to the highest, most influential and important contacts around the globe.
As the organizer and sole financer of Miss Europe 2021, he saw the importance of bringing the prestigious event back to Lebanon’s capital.
When asked what drove him to bring the pageant to Lebanon, Fawaz said, “With the Lebanese economy in serious distress, many were skeptical that the Miss Europe organization would ever consider Beirut, let alone as a more permanent home. I self-funded the 2021 Miss Europe event, confident in the belief that we could have a successful and rewarding competition, especially during this difficult time in Lebanon. A big win in my work to bring back Miss Europe was the creation of jobs for Lebanese out of work and needed revenues going to local businesses that were the underbelly of the logistics of the event.”
About Miss Europe
Miss Europe is a beauty pageant established in 1927 by Fanamet as a one-off event where the winner was to star in a film directed by Friedrich Wilhelm Murnau. Miss Europe was re-established by Maurice de Waleffe, with the first contest in 1929.
About Yassin K. Fawaz
Yassin K Fawaz leverages his far-reaching international connections as CEO of the Raddington Group. His Washington, D.C.-based strategic advisory firm provides heads of state, royals, and billionaires with consultative and intelligence services that are crucial global decisions and investments.
His insights have been highlighted in Forbes, Huffington Post, and The Hill. Yassin has been instrumental in implementing support programs in parallel with advocacy and financial support for the deserving, which includes educational grants for low-income students and material donations to charitable causes in hotspots of the world.
Media Contact:
Shandrew PR
Jerry ShandrewJerry@shandrewpr.com
Source: Yassin K. Fawaz