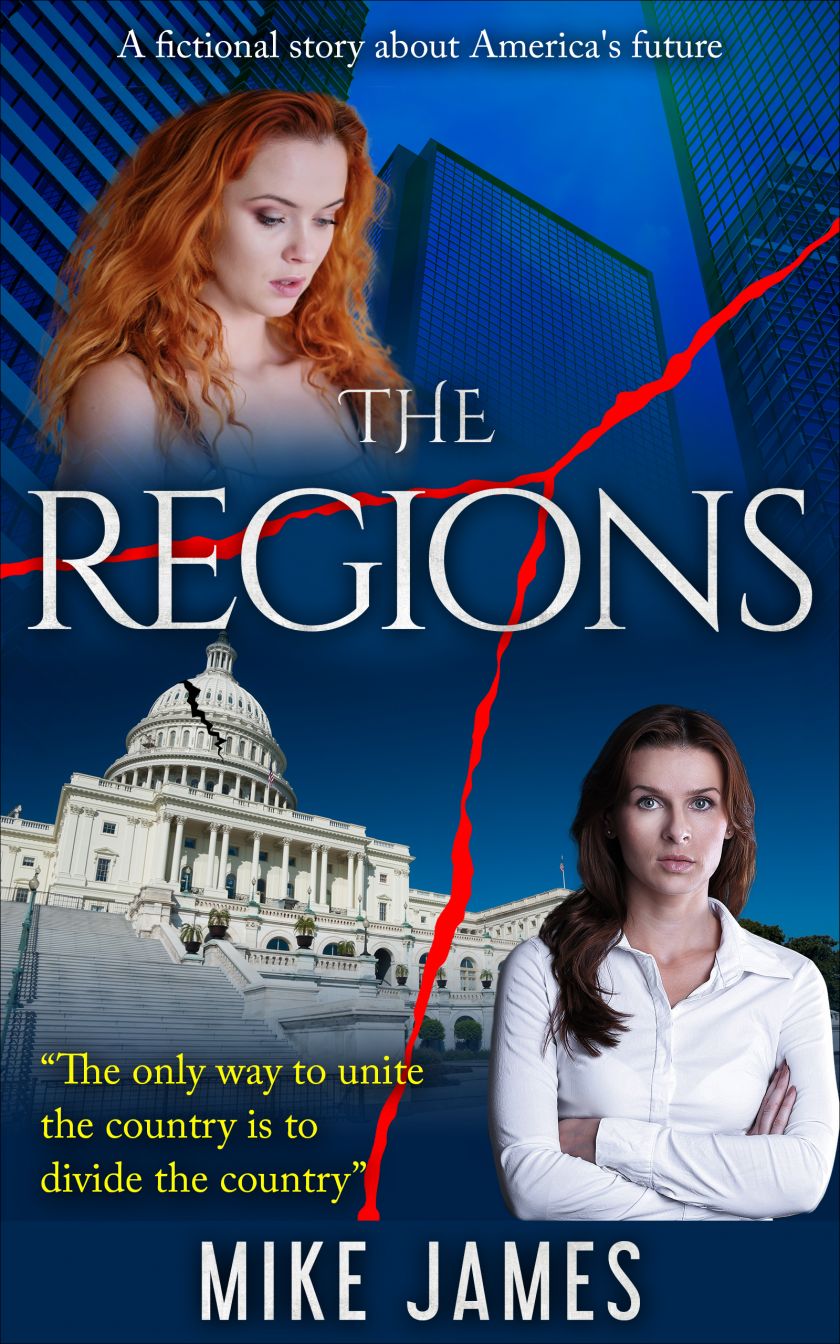 A new book called “The Regions” looks at one possible solution to the terminal political division in America. In the 700 page novel, the country divides into three self-governing Regions that aren’t bound by Supreme Court precedent or subject to Federal law. Each Region is free to build the society of their dreams without the burden of compromising with their political enemies.
The highly imaginative and often humorous novel, which currently has five stars on Amazon, starts in the near future and tells the story of how the Regions are formed. Zoe and Addison grow up in different Regions with completely different educations and laws. As adults, they experience the strange worlds of the other Regions, where they face unexpected situations and must make agonizing choices.
The words Democrat, Republican, liberal and conservative never appear in the book but it’s obvious which Region is which. Addison grows up in the Region called Choice and Equality, abbreviated “CE”. The Region has a huge government and all members of the CE are offered a government job with a guaranteed salary but the CE takes most of the money in taxes. Everyone drives the same model of car and lives in similar-looking ecologically friendly housing. Everything is subsidized to make food and clothing affordable, health care is free, and the borders are wide open. There is a Trigger Book of offensive words and phrases. Guns are prohibited. As an adult, Addison and her husband move to the Independent and Undecided Region, which is under the control of a religious group that enforces their strict laws.
By contrast, Zoe lives in the Morals and Values Region (MV) which has a tiny government, no public schools, and no protections for consumers. Capitalism rules and corporations are free to do as they please. Most services are handled by entrepreneurs. A large tech company has created the Quire, a futuristic device whose technology runs everything in all the Regions, including voting, banks and Regional Identity Cards. A large wall is built around the entire MV Region and anyone entering must go through Regional Extreme Vetting. Most people wear guns. The emphasis is on success, so the highest earners pay the lowest taxes. Any abortion-related procedure is considered murder, so when Zoe needs an operation she and her husband must go to the CE where they find a world very different from their own.
“The Regions” by Mike James is exclusively available on Amazon in e-book or paperback. Contact the author at authormikejames@gmail.com
Source: Mike James