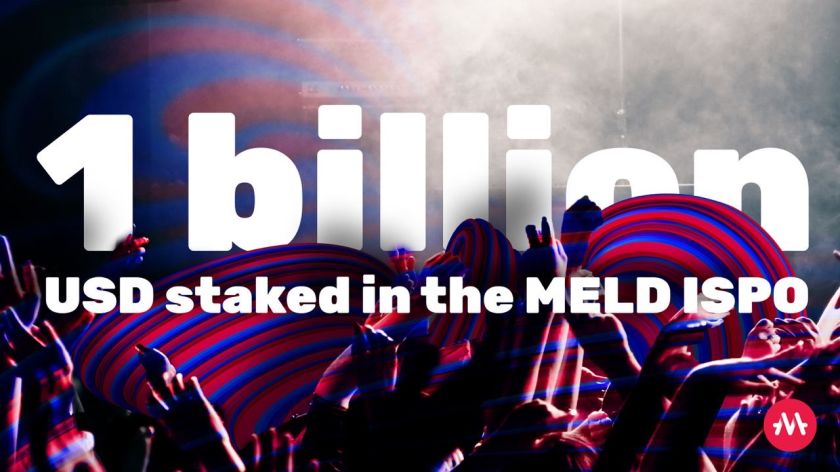 MELD, the first DeFi, non-custodial, banking protocol, has announced that it has now reached over $1 billion USD in contributions towards its Initial Stake Pool Offering (ISPO). With almost 40,000 participants, the ISPO has successfully generated over $10M of revenue for MELD, which will be used to build out accessible new financial services for the 2 billion people in the world who are underbanked, unlocking $15T of economic value.
Within the first 24 hours of MELD’s ISPO, the first pool was filled up and roughly $100 million USD worth of value was staked. Just five days after the ISPO launch, four pools were filled up, equating to almost $200,000,000 USD worth of value coming from MELD ISPO participants.
“The idea of the ISPO came to me after seeing community criticism of a project launch where none of the community managed to get any tokens,” said Ken Olling, Co-founder & Chairman of MELD. “‘Fair launch’ was an idea the community talked about and I really embraced. So I started thinking of this, and how to go about it and that is how I came up with the ISPO model. Later, however, I found out that the idea of an ISPO had been proposed, but it had never been done. We did it.”
An Initial Stake Pool Offering is a liberating new way for early adopters to support MELD using the Cardano blockchain. An ISPO provides interested parties with the ability to participate in an upcoming project not by buying a token as is done in the case of ICOs and STOs, but rather by staking their ADA into a Cardano stake pool. Users who wanted to participate in MELD’s ISPO could delegate their ADA to the public MELD stake pools for any length of time they choose. Depending on the duration and quantity of ADA staked, delegators are rewarded MELD tokens.‌ The MELD ISPO stopped accepting new delegations on the 27th of October as it had reached the limit for rewards. All delegations made before that continue to produce rewards until the 8th of December which was set forth as the end date for the ISPO.
MELD essentially functions as a cryptocurrency and fiat lending and borrowing platform. People holding cryptocurrency are in constant need of fiat currency (like USD and EUR), but in order to access their fiat currency, they must first sell their tokens, pay a capital gains tax, exit valuable markets, and give up tokens that may have had long-term potential.
MELD offers a solution to this dilemma by providing its users with the opportunity to borrow fiat currency using their cryptocurrency as collateral. Those who need fiat currency can access instant loans (up to 50% of their staked crypto) while using their cryptocurrency as collateral without having to liquidate and lose their position.
For more information regarding MELD and the world’s first ISPO, please visit https://meld.com.
Logos can be downloaded here: https://docs.meld.com/branding/meld-logos
MELD – Be Your Own Bank
MELD thinks it’s essential for everyone to gain control of their financial lives and have equal access to financial instruments used by professionals, not just centralized institutions, governments, or the 1%. MELD wants to provide financial freedom and control to the masses, including the unbanked.
MELD has a long-term goal to enable the $15 trillion that is currently locked out of the global economy, including 2 billion individuals worldwide that are either underbanked or have no access to banking services whatsoever, to access these tools. These are the people that are paying the highest fees, getting the worst customer service, and they are the ones that are having the most problems.
MELD’s vision is to create an ecosystem that empowers individuals to regain financial control by providing them with the tools and services they need to manage their money on their terms. Whether that be creating a collateralized debt position (CDP) with cryptocurrency, earning an interest return for lending fiat to borrowers, or even participating in reward incentive programs, MELD strives to provide its users with the functions they need to manage their own financial lives.
Website | GitBook | Twitter | Telegram Group | Telegram Channel | LinkedIn | Github | YouTube | Discord
For more information, please contact:
Lise Wessel
<lise@meld.com>
+4747289203
Source: MELD