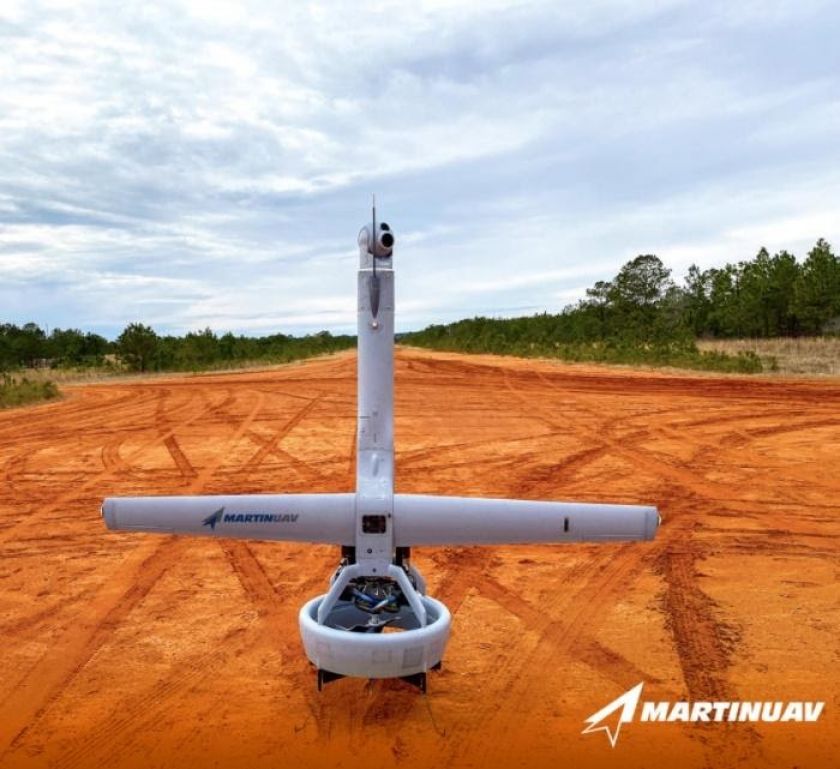 Martin UAV, a leading advanced aviation technology manufacturer in the United States, today announced its selection and further participation in the Army Expeditionary Warrior Experiment (AEWE), which assesses advanced technologies in support of the U.S. Army modernization efforts, including the Army’s six modernization priorities. AEWE is taking place Feb. 5-March 5, 2021, at Fort Benning in Georgia.
For AEWE, Martin UAV deployed and is scheduled to demonstrate its newly upgraded version of the V-BAT, the V-BAT 128, showcasing increased power, payloads and endurance. Among the V-BAT 128’s enhancements are updates to the engine with increased horsepower, 11 hours of endurance, higher ceiling (20,000′ MSL) and interchangeable payloads (25 lbs not including fuel weight) for mission-specific requirements. The improved version of the V-BAT maintains its current small VTOL footprint to launch, transport and operate.
“We are honored to be a part of AEWE, being among some of the best organizations in the industry, to support their efforts to explore increased innovation,” said Heath Niemi, Chief Development Officer. “We have listened to our customers and are excited to deploy our upgraded V-BAT, displaying how Martin UAV is increasing mission capability, security and mitigating operational risk. The V-BAT’s versatility and agile nature of its competencies lend itself well for the varied needs of the Army and we could not be more excited about the upcoming demo days.”
Founded in 2015, Martin UAV and the V-BAT aircraft is best-known among government agencies for the organization’s work with the Department of Defense, supporting the Army, Marines and, most recently, the United States Southern Command’s (SOUTHCOM) enhanced counter narcotics operation in the Eastern Pacific.
AEWE assesses Cross Domain Maneuver (CDM) concepts and capabilities at the lower tactical echelon in support of Multi Domain Operations (MDO). The Experimentation Force (EXFOR) will employ mutually supporting lethal and nonlethal capabilities across multiple domains (air, land, space, and cyberspace), the electromagnetic spectrum, and the information environment to create a synergistic effect that increases relative combat power and provides overmatch. It is the Army’s primary venue for Small Unit modernization, providing capability developers, Cross Functional Teams (CFTs), PEO’s, Army Science and Technology (S&T) community, and industry a repeatable, credible, rigorous operational experiment supporting both concept and material development.
The AEWE V-BAT 128 demos take place on Feb. 19, Feb. 23, Feb. 26 and March 2 at Fort Benning. For more information on Martin UAV, its V-BAT and use across industries, visit: martinuav.com.
About Martin UAV:
Martin UAV is a private, advanced technology company based in Plano, TX. The company specializes in building wholly-unique, unmanned aircraft systems and associated flight control software. The company’s systems are commercially developed to fill critical operational needs in tactical and confined operational environments. Its V-BAT aircraft is the only single-engine ducted fan VTOL that has the ability to launch and recover from a hover, fly over 11 hours in horizontal flight, and make mid-flight transitions to “hover & stare” at any time throughout a given mission set. For more information, visit: martinuav.com.
Contact:
Ester Peres I Martin UAV
Phone: +1 214.240.6659
Email: eperes@martinuav.com
Amy Kauffman I Newswire
Phone: 214.235.6043
Email: amy@newswire.com
Source: Martin UAV LLC