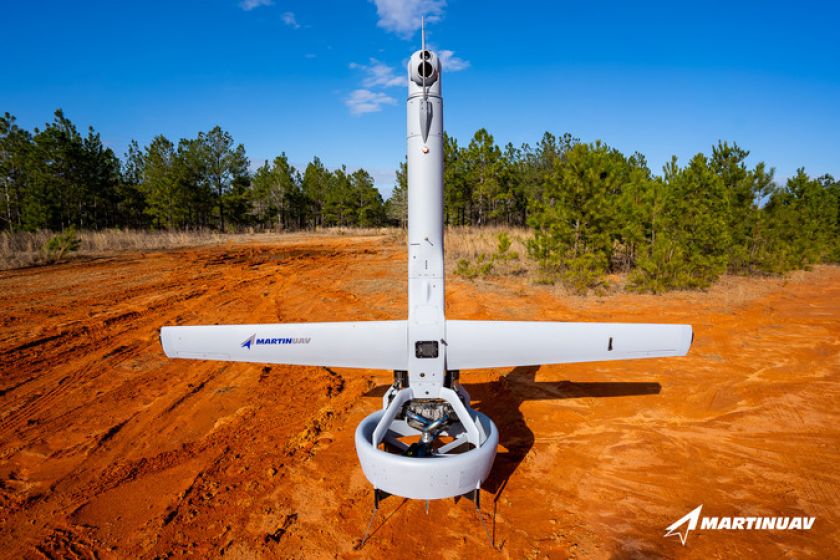 The Navy selected Martin UAV’s V-BAT for a VTOL UAS prototyping and development effort in order to fulfill new technological requirements driven by the changing nature of threats in austere operating environments.
Martin UAV was one of thirteen respondents to the Navy’s Mi2 Challenge and was later down selected with L3Harris Technologies to compete in a technology demonstration at the Yuma Proving Grounds in Yuma, Arizona.
The merit-based competition that included technology questionnaires, performance summaries, and in-depth supporting artifacts in accordance with established criteria, sought maximum portability, self-sufficiency and modularity in UAS hardware and payload capabilities without the need for ancillary support equipment.
The V-BAT was selected to meet these requirements as a result of its minimal logistic support requirements and maximum versatility. The system offers vertical takeoff with a single-engine ducted fan, automatic transition to straight and level flight, easily commanded hovers and stares, interchangeable payloads, and an open architecture.
Since its founding in 2015, Martin UAV has always maintained a focus on the true needs of the warfighter and worked to develop the V-BAT to meet those exact needs. Now, as a result of winning the Mi2 Challenge, Martin UAV has a clear path to continuing those development efforts and deliver a leading edge ISR technology with operator input included.
“Martin UAV’s V-BAT was designed to address the needs of the warfighter in an ever-changing landscape and is now an integral part of reshaping mission requirements and capability offerings to better equip the Navy in future operations,” said Heath Niemi, Martin UAV’s Chief Development Officer and retired U.S. Army colonel.
“Without Martin UAV CEO Ruben Martin’s commitment to innovation, the team’s relentless dedication to superior product development, and the support and expertise of our partner Broadhead Consulting throughout the entire process; offering this unique UAS solution would not have been possible,” Niemi added.
“The awarding of this opportunity does not just benefit Martin and its partners, it truly benefits the warfighter and everyone involved in support of defense mission sets, and we couldn’t be more appreciative of the opportunity,” said Niemi.
About the V-BAT and Martin UAV:
The V-BAT is currently deployed in various areas of operation around the world in support of the U.S. Department of Defense, such as the U.S. Army’s Future Tactical UAS program, SOUTHCOM/JIATF-S, the U.S. Marine Corps with an expeditionary unit, and the U.S. Coast Guard.
Martin UAV is a private, advanced technology company based in Plano, TX. The company specializes in building wholly-unique, unmanned aircraft systems and associated flight control software. The company’s systems are commercially developed to fill critical operational needs in tactical & confined operational environments. Its V-BAT series aircraft is the only single-engine ducted fan VTOL that has the ability to launch & recover from a hover, fly up to eleven hours in horizontal flight, and make mid-flight transitions to “hover & stare” at any time throughout a given mission set. For more information visit: martinuav.com.
Contact:
Amy Kauffman I Newswire
Phone: 214.235.6043
Email: amy@newswire.com
Ester Peres I Martin UAV
Phone: +1 214.240.6659
Email: eperes@martinuav.com
Source: Martin UAV