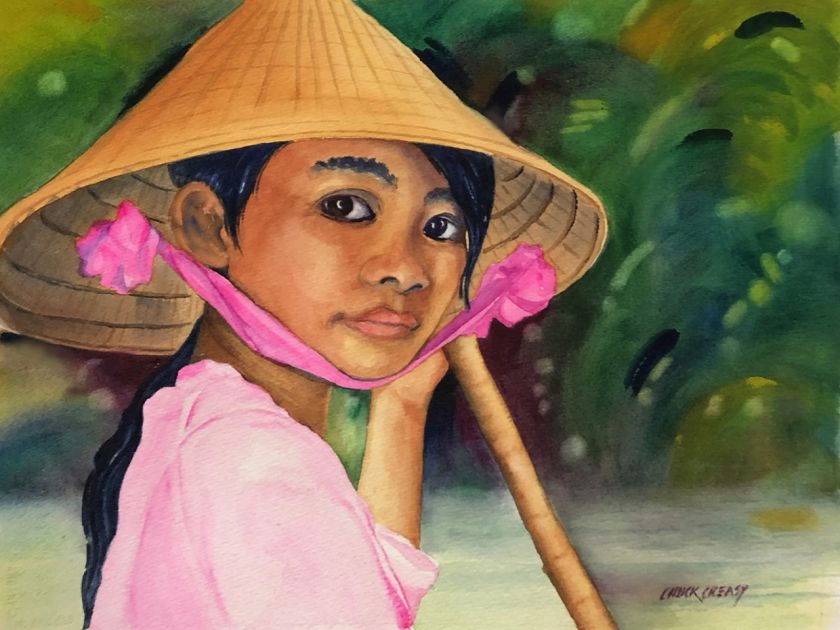 The exhibit, titled Vietnam 2 Soldiers. 2 Artists. 2 Journeys. Then & Now, will run June 20 to August 1 and will feature the work of two stellar Tennessee-based artists who both served in the Vietnam War. An authentic Huey helicopter, which flew in Vietnam during the 1960s and later appeared in various Hollywood films and television shows, will provide rides to the public on opening day.
“The MACC is honored to be the first art gallery in America to present this amazing exhibition, which will showcase the artwork of David Wright and Chuck Creasy,” says Cheryl Strichik, the MACC’s executive director and CEO. “I am excited about this show because it’s not just another war exhibit. David’s and Chuck’s expressive drawings and watercolors focus our attention on ordinary people, on American soldiers and Vietnamese civilians, and on the beauty of the Vietnamese countryside. So this is really an exhibition about our shared humanity. It’s about the healing, transformative power of art.”
Wright, long one of America’s foremost painters of the American frontier and the Civil War, served as an adviser in the U.S. Army while stationed in Vietnam in 1965. During his tour of duty, he drew sketches of his American comrades and of civilians in the highlands of Vietnam. Many of his original drawings from the war will be on display at the MACC.
Creasy, who spent 48 years working as a top advertising creative in Nashville, was an artillery forward observer attached to an infantry company in Vietnam in 1968. He returned to Vietnam exactly 50 years later, traveling the country and photographing the people and places he visited. He used these photographs as a source to create the deeply felt watercolors that will appear at the MACC this summer.
Wright and Creasy will both be at the exhibition’s opening reception, which takes place from 1 p.m. to 5 p.m. on Sunday, June 20. An authentic Huey UH-1 helicopter, on loan from MARPAT Aviation in West Virginia, will also be on hand to provide rides to the public. This helicopter flew in Vietnam from 1962 to 1971 and was once assigned to the 114th Assault Helicopter Company. After the war, it became something of a Hollywood star in its own right, appearing in the climactic scene of 1988’s blockbuster film Die Hard as well as on Baywatch and other TV shows. Rides on the helicopter are free but donations are suggested to help pay for the maintenance of this icon of American military history.
Dr. David Black, who served in the U.S. Marine Corps and was stationed in Vietnam during 1968-1969, and Congressman Diane Black, are the presenting sponsors for the exhibition. U.S. Pest Protection, J.K. and Erica Brister are the corporate sponsors.
Monthaven Arts and Cultural Center is conveniently located off Gallatin Pike just three miles east of Rivergate Mall. The place serves as a haven for the arts, hosting major art exhibitions throughout the year. It also offers classes and summer camps on art and film for children and adults. Monthaven Mansion is available to rent for weddings, receptions, showers, corporate team-building classes and private parties. For more information, visit www.monthavenartsandculturalcenter.com or call (615) 822-0789.
Source: Monthaven Arts and Cultural Center