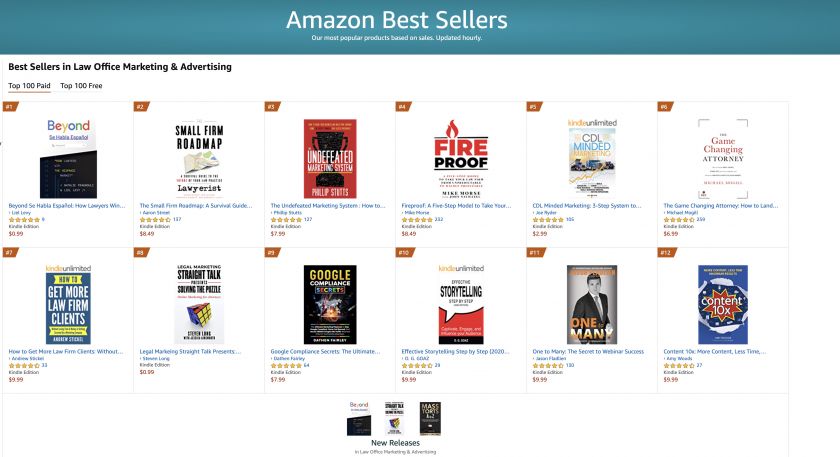 After being released just over two weeks ago, “Beyond Se Habla Español: How Lawyers Win the Hispanic Market”, authored by the founders of Nanato Media, Natalie Fragkouli and Liel Levy, has quickly become an Amazon best seller in the Law Office Marketing and Advertising and Customer Relations categories.
The book is primarily targeted at attorneys whose clientele are largely individual consumers; examples include personal injury, workers’ compensation, bankruptcy, immigration, family law, criminal, and other practices. Nanato Media, the authors’ marketing agency, is headquartered in Austin and is focused on aiding law firms that concentrate on the rapidly expanding Hispanic American market.
Since publication, several media outlets have already featured authors Fragkouli and Levy discussing their book and the importance of the growing Hispanic community for law firms. One such article published by the Daily Business Review is titled “Reaching Hispanic Clients: Why Digital-Forward is the Smart Strategy for Firms”. In the article, Fragkouli and Levy stress the importance for firms to use the right marketing channels in connecting with the Hispanic community, the fastest-growing demographic in the United States.
The reception on the online platforms has been stellar for the book as well. As of publication, “Beyond Se Habla Español” has a 100% 5-star rating on Amazon. Stephanie, a reader from the United States, titled her review A Must-Read for Legal Marketing Professionals in 2021.
Fragkouli and Levy were also featured on Law360, once again discussing the importance of marketing to Hispanic audiences and the intricacies of doing so effectively. “We’re thrilled at the reception the book has received thus far, and are happy to see individuals and publications recognizing the importance of the U.S. Hispanic population,” said Levy. “So many firms are either entirely ignoring the Hispanic market or making so many mistakes that their efforts are fruitless; we hope that with our book we are able to shift the paradigm and in doing so benefit both the Hispanic community and the firms that serve them; it’s truly a win-win.”
“Beyond Se Habla Español” was published on July 13. It is available at all major booksellers including Amazon and Barnes & Noble.
About the authors and Nanato Media
Natalie Fragkouli is an MBA with more than 10 years of experience serving firms that need help marketing to the Hispanic American demographic. Liel Levy grew up working in a family-owned business that became one of the country’s largest Hispanic legal brands. Together, Fragkouli and Levy co-founded Nanato Media with the goal of helping law firms run relevant, expert campaigns targeting local Hispanic markets.
Media Contact: Liel Levy – hey@nanatomedia.com – 512 813 0087
Source: Nanato Media