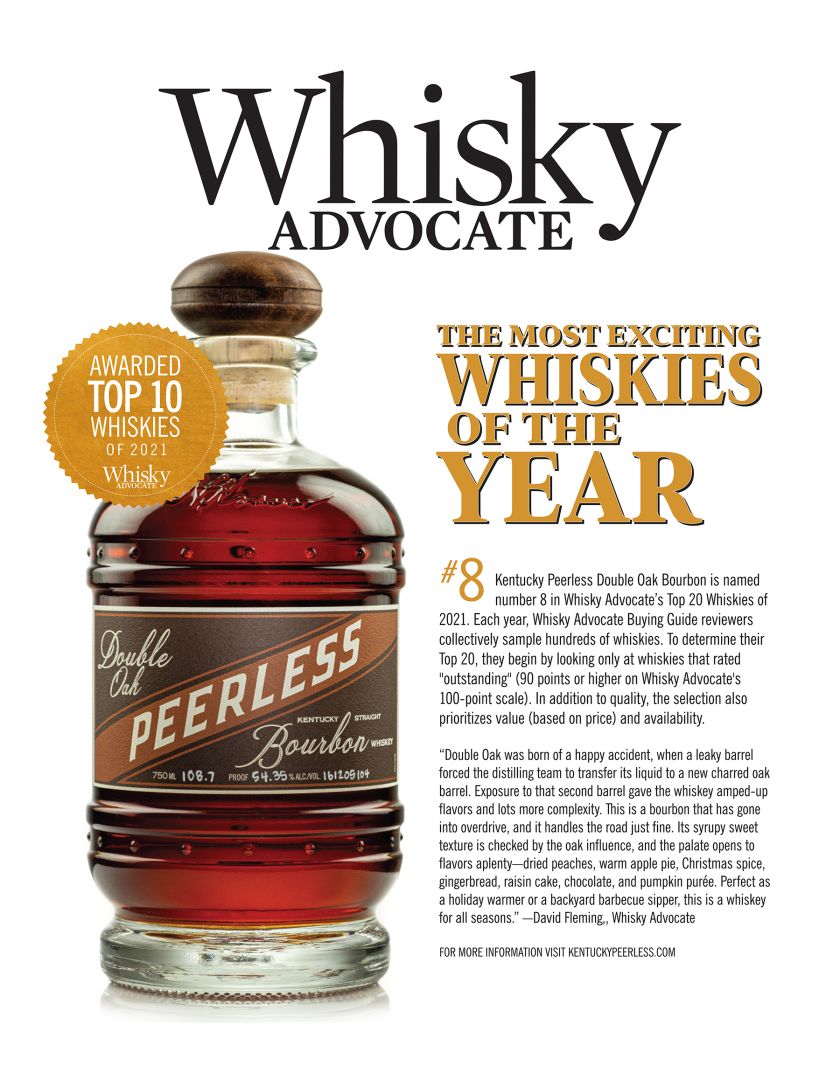 “Double Oak was born of a happy accident, when a leaky barrel forced the distilling team to transfer its liquid to a new charred oak barrel. Exposure to that second barrel gave the whiskey amped-up flavors and lots more complexity. This is a bourbon that has gone into overdrive, and it handles the road just fine. Its syrupy sweet texture is checked by the oak influence, and the palate opens to flavors aplenty—dried peaches, warm apple pie, Christmas spice, gingerbread, raisin cake, chocolate, and pumpkin purée. Perfect as a holiday warmer or a backyard barbecue sipper, this is a whiskey for all seasons,” says David Fleming, Whisky Advocate.
To celebrate, the first 50 bottles of Double Oak Bourbon sold will be signed by Master Distiller Caleb Kilburn. Pre-orders start on Monday, December 13th. Exposing Peerless Bourbon to two separate casks allows for two full barrel extractions resulting in supercharged notes and supreme complexity and mouthfeel. The dedicated Peerless tasting team strategically selects barrels with prominent grain, fruit, and herbaceous notes that are complemented well by the extra barrel character. This population of barrels are packed with flavor yet balanced enough to uphold the Peerless name.
Find out more at kentuckypeerless.com or visit the distillery at 120 N. 10th Street in downtown Louisville. The distillery is open for tours and tastings by reservation Monday through Saturday 10 a.m. to 5 p.m.
About Kentucky Peerless Distilling Co. After beginning barreling in 2015, the Taylor family has been patiently crafting one barrel at a time. Corky Taylor, Fourth Generation and CEO has been breathing life back into his great-grandfather’s legacy that originally started in 1889. Peerless released their first Bourbon in 102 years standing true to what the first generation once started. The Taylor family has taken no shortcuts in crafting quality whiskey surpassed by none. All under one roof in Louisville’s Bourbon District, the select grains are milled, cooked, fermented, double-distilled and barreled as bourbon and rye.
2017 Awards
Tricor Braun’s Spirits Division Package of the YearSmall Batch Rye named Top 20 Most Exciting Whiskies of the Year by Whisky Advocate Magazine 2018 AwardsSmall Batch Rye named Top 5 Best American Whiskey in Forbes magazine2019 Awards”Craft Producer of the Year” for the Americas by Whisky Magazine”Global Craft Producer of the Year” by Whisky Magazine2020 AwardsSmall Batch Kentucky Straight Bourbon named “Best Kentucky Bourbon” by World Whiskies Awards Peerless Small Batch Kentucky Straight Rye awarded Category Gold for Rye 12 Years andUnder by Whisky MagazineMaster Distiller Caleb Kilburn was a finalist for best distiller by Whisky MagazinePeerless was among the 12 final nominees for best distillery tour by Whisky Magazine2021 AwardsSmall Batch Bourbon received 92 points from Wine Enthusiast magazineSmall Batch Rye received 93 points from Wine Enthusiast magazineDouble Oak Bourbon received 93 points in Whisky Advocate’s Top 20 Whiskies of 2021
Contact: Kentucky Peerless Distilling Company 120 North 10th Street, Louisville, KY 40202For press inquiries: cadie@kentuckypeerless.com
For Peerless Double Oak elements, visit: https://bit.ly/PeerlessDoubleOak
Like or follow Peerless on Facebook | Instagram | Twitter | YouTube
Source: Kentucky Peerless Distilling Co.