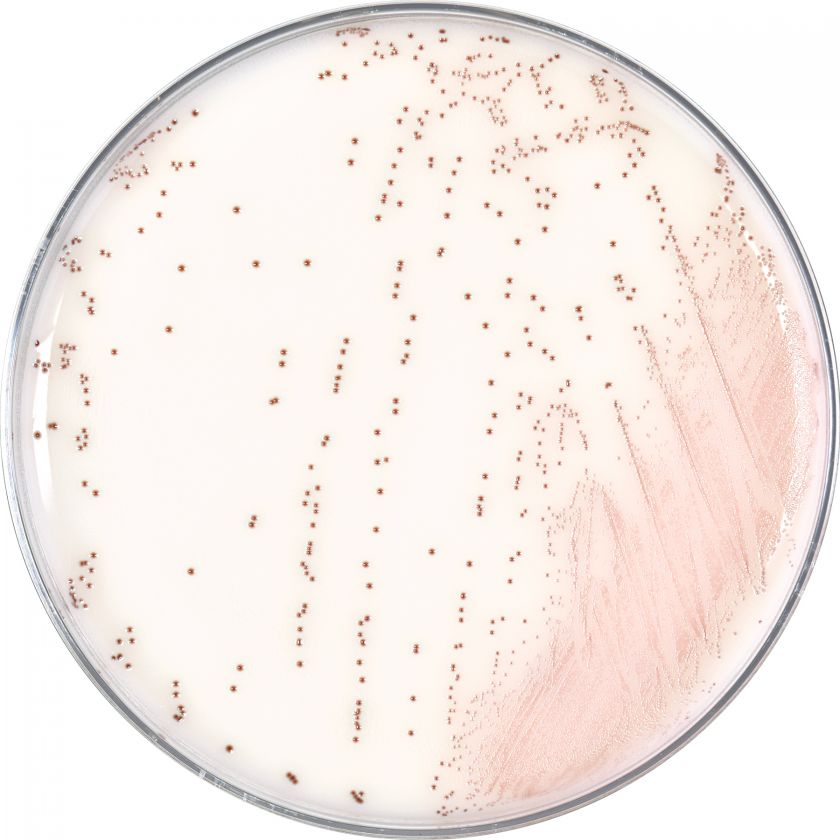 Hardy Diagnostics, an FDA licensed and ISO certified manufacturer of medical devices for microbiological procedures, is excited to announce the release of its latest chromogenic media, HardyCHROM™ Group A Strep agar. This chromogenic medium is recommended for the selective cultivation and differentiation of Group A Streptococcus (S. pyogenes) from clinical specimens. Identification can be made based on colony color without the need for confirmatory testing. This easy-to-read medium will display red-brown or red-orange colonies on HardyCHROM™ Group A Strep agar when Streptococcus pyogenes is present. Conversely, non-Group A Streptococcus isolates will appear as blue, clear or white colonies.
Group A streptococcal (GAS) pathogens can produce infections ranging from throat irritation to death. GAS causes infections such as strep throat and impetigo. According to the Centers for Disease Control, these bacteria also cause approximately 11,000-24,000 cases of severe (invasive) GAS disease, such as necrotizing fasciitis, in the United States each year. Each year, about 1,200-1,900 people die due to invasive GAS disease. The disease burden in developing countries, especially due to rheumatic heart disease, is much greater.
Group A streptococcal infections can occur any time during the year. However, some infections are more common in the United States in certain seasons:
Anyone can get a Group A streptococcal infection, but some infections are more common in certain age groups:
HardyCHROM™ is Hardy Diagnostics’ line of chromogenic, selective and differential culture media, recommended for use in primary cultivation and isolation of microorganisms. Hardy Diagnostics was the first company to introduce chromogenic media to the United States in 1996. For more information about HardyCHROM™ Group A Strep Agar or any of the HardyCHROM™ products that identify bacteria and yeast by colony color, please visit www.hardydiagnostics.com.
Hardy Diagnostics is an FDA-licensed manufacturer of medical devices for microbiology testing with an ISO 13485 certified Quality Management System. Hardy Diagnostics manufactures more than 2,700 products for the culture and identification of bacteria and fungi from its California and Ohio manufacturing facilities and maintains nine distribution centers nationwide. Hardy Diagnostics distributes more than 13,000 products, services more than 10,000 laboratories and exports to more than 80 foreign distributors. Hardy Diagnostics’ mission is to produce and distribute the finest products for the detection of microorganisms and partner with its laboratory customers to diagnose and prevent disease. For more information on products and services, visit www.hardydiagnostics.com.
Contact Person: Megan RoesnerPhone:  805-346-2766 or 800-266-2222Company Name: Hardy DiagnosticsAddress: 1430 West McCoy Lane, Santa Maria, CA 93455Company Website: www.HardyDiagnostics.com
Source: Hardy Diagnostics