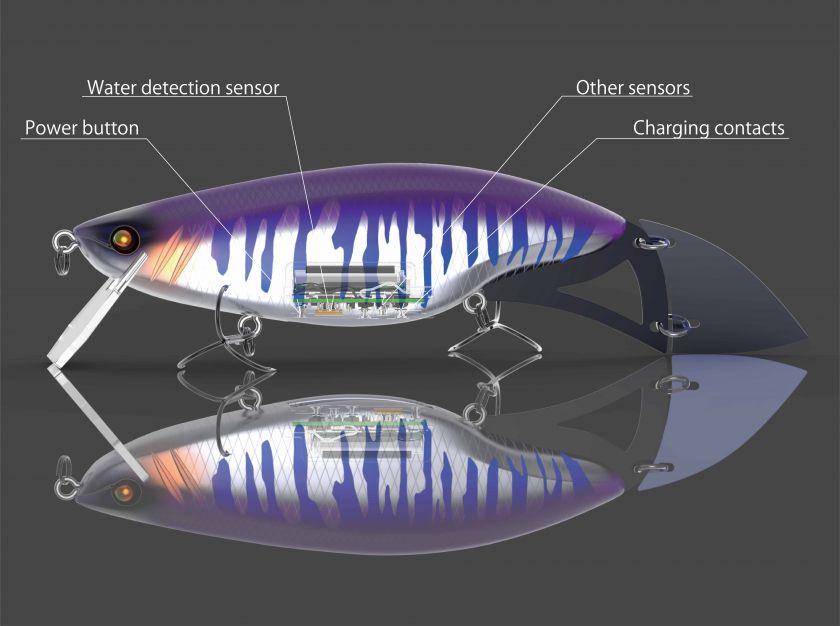 smartLure Corp. announced today that the company has developed the world’s first* intelligent lure, “smartLure Model Zero”, which collects data on its actions and environmental factors while it is in the water and transfers the data to smartphone for processing. This enables anglers to obtain accurate information on the underwater environment that could not be seen ever before, and to utilize the information as clues to improve their catch.
Since the Stone Age, anglers have tried to learn about fish behavior through observation. The anglers’ strong desire to know more clearly what is going on in the water has driven the innovation of the technologies in fishing rods, lines, and other fishing equipment. However, conventional fishing technologies have not been able to realize the desire fully because it is not easy for human species to observe fish in the water and because it is challenging to interpret the behavior of fish definitively based on the information acquired through rod and lines.
The smartLure Model Zero is a game changer. It is equipped with a proprietary sensor module that produces high-definition data on water temperature, brightness, and actions and depth trace of the lure while it is in the water. These data are transferred to the smartLure app whenever requested by the angler. In addition to the location and date/time information, the app integrates not only data from the lure but also the location, weather conditions, moon age, tides, and other information that could affect the behavior of fish and ultimately fishing results.
smartLure Corp. collects these data points around the world to form big data. The founder Yuki OKAMURA said, “We analyze the data by fish species, underwater environment, lure types, colors, and actions so that the secrets of fishing can be brought to light.”
In the future, when the intelligent lures get popular, the collected data can be used for other purposes; detecting the changes of the environment, or counting the number of vulnerable animals in the water. Some ichthyologists have already shown an interest in our lures since they recognize that our lures can be powerful tools for their research subjects. The founder OKAMURA said, “We hope that our findings obtained through our intelligent lures are utilized for preserving the hydrosphere environment and for tracking the population of fish.”
“The smartLure Model Zero is an innovative lure that can assist us to figure out clues to feeding behaviors of fish,” said Gunzo Kawamura, Adviser of smartLure and Distinguished Fellow of Borneo Marine Research Institute. “We have been making remarkable progress in improving fishing equipment in recent years. For example, a new type of hook that prevents fish from swallowing it deeply and ensures a high survival of rate after release has been investigated and developed. However, nobody tries to explain why fish don’t swallow the hook deeply from the viewpoint of fish, because we can’t see the feeding behavior of fish directly in the water. By accumulating various data points of fishing accurately and globally using smartLure, we can bring more creativity and originality into fishing. As a result, I’m sure that fishing techniques will be improved.”
* Based on intellectual property and sales research by smartLure Corp. and its patent attorney. So far, we have identified the following cases: a) a lure-type electronic device that claims to be equipped with some sensors in its specifications, but cannot display sensors’ data in a linked app, and b) a case where a patent has been obtained but has not been commercialized. The patent claims are not considered to conflict with the products of smartLure Corp.
Pre-order starts on Kickstarter on Sunday April 25
The smartLure Model Zero will be available for pre-order on Kickstarter at 8 PM on April 25 PDT. Shipment for backers is scheduled to start in February 2022.
Since founded in 2017, smartLure Corp. has been developing intelligent lures with sensor modules. In January 2021, the corporation has completed producing 30 pcs. of EVT (Engineer Verification Test) level sensor modules. In the field tests that started in March, testers actually caught fish and confirmed that the system could stably acquire high-definition data during the process of fish strike to the lure, that the system could continue sensing throughout a day, and that the data is successfully transferred and visualized on the app whenever the angler requested.
While confirming the performance of the product prototype through field tests, the corporation also ascertained the cost of mass production. The founder OKAMURA said, “As a result, we got confidence in moving on to mass production of the sensor module and decided to launch this crowdfunding campaign.”
“We have been interviewing a lot of anglers, and we found that there are trends of applying data to fishing, such as using IT tools like map apps and spreadsheets to record and analyze their fishing experience.” In the United States, some start-up companies are developing services that anglers can record their activities using devices attached to rods and clothings. Anglers who are keenly aware of these trends are the target of this crowdfunding campaign.
The corporation will be redesigning the sensor module for mass production, testing its durability, and conducting user tests in parallel with obtaining certifications and developing apps/servers. Since mass production of the sensor module requires an ODM (Original Design Manufacturing) contract with an investment of hundreds of thousands of dollars, smartLure Corp. plans to solicit investors and raise funds separately from the crowdfunding.
*The following links will only be valid after the kickstarter campaign has launched.
https://www.kickstarter.com/projects/1942670366/smartlure-model-zero

If you would like more information about this topic, please  email to the founder Yuki OKAMURA (yuki.okamura@smartlure.co) and the corporation (info@smartlure.co).
###
Source: smartLure Corporation